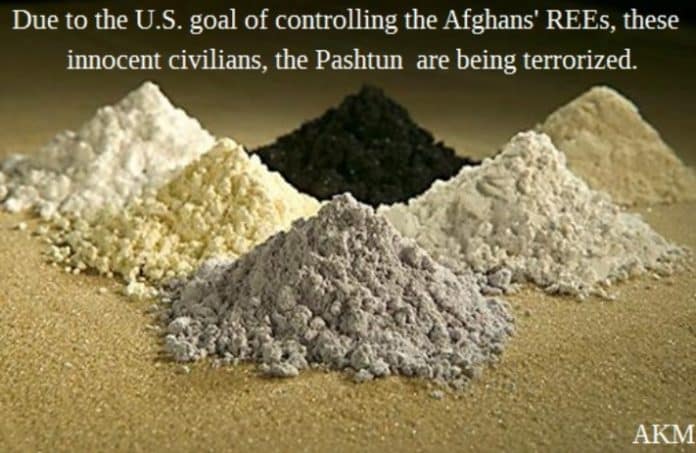 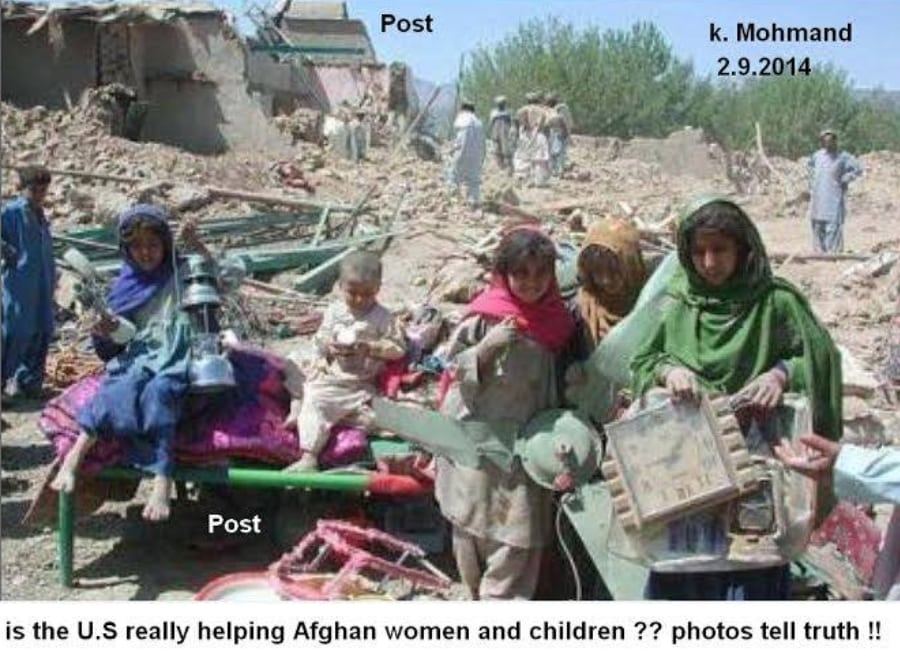 THE GENOCIDE OF THE PASHTUN VILLAGERS IN HELMAND PROVINCE, WHERE THE LARGEST UNTAPPED DEPOSITS OF RARE EARTH ELEMENTS (REEs) ARE LOCATED, MUST STOP. THESE WAR CRIMES ARE BEING COMMITTED BY THE U.S. , NATO, THEIR PUPPETS, NORHERN ALLIANCE, AND THEIR AGENTS, THE PRIVATE CONTRACTORS AND MERCENARIES. THE U.S. AND NATO ARE USING THEIR PUPPETS AND OTHER AGENTS TO TRY TO DENY THEIR RESPONSIBILITY FOR THESE WAR CRIMES.

These REEs, such as lithium, are worth trillions and vital to the manufacture of technology and defense systems. They are used for batteries, laptops etc. Due to the United States’ goal of controlling the Afghans’ REEs, these innocent civilians, the Pashtun villagers are being terrorized. Their homes are being bulldozed and destroyed. 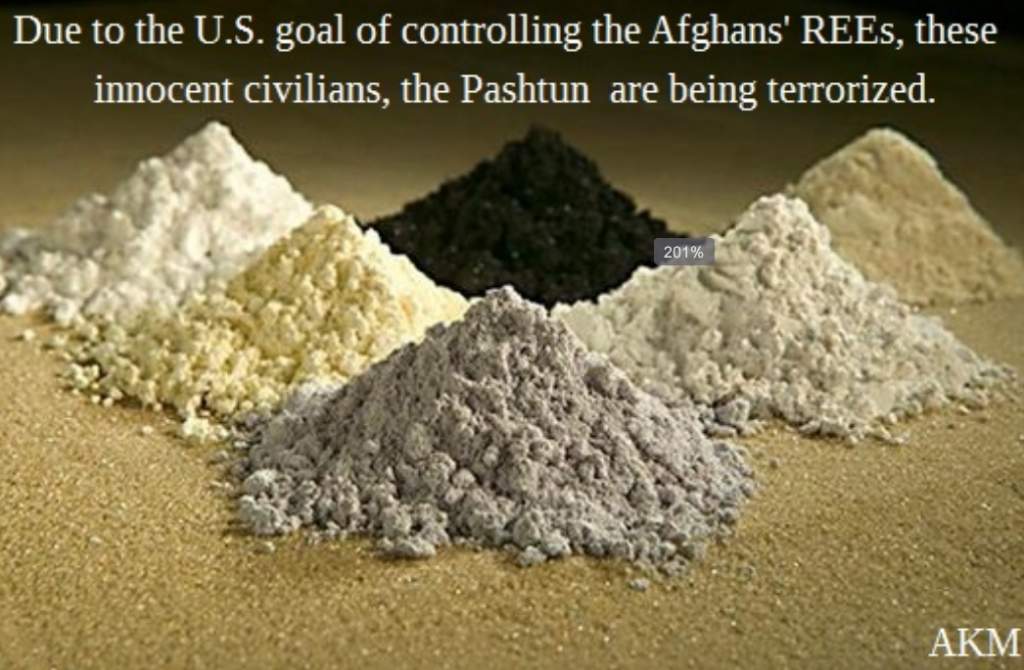 They are being killed, tortured, raped, wrongfully imprisoned in large numbers, and forced to relocate. This covert war against the Pashtun villagers needs to stop and the war criminals prosecuted in lawful tribunals.

Unfortunately, I believe this illegal covert war against the Afghan/Pashtun is likely to continue because of the REEs and Afghanistan strategic location. The U.S. and NATO invaded Afghanistan to stay. Permanent occupation is planned as evidenced by the recent statements of U.S. Defense Minister Carter while he was in Afghanistan. 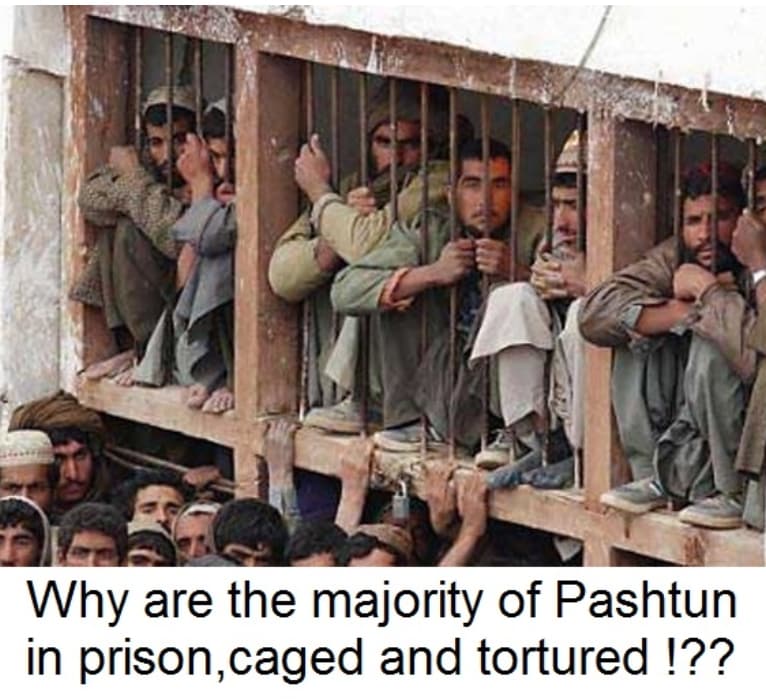 Puppet Ashraf Ghani was not elected by the Afghan majority but “selected” by the U.S. government as the president of Afghanistan, he has traveled to Saudi Arabia, Pakistan and China talking about peace and bringing the Afghan Resistance to the negotiation table to make it look like he is concerned about peace. While preaching peace, at the same time, he is ordering his troops to work with the United States’ and NATO’s private contractors and mercenaries to genocide the Pashtun villagers in Helmand Province where the vast untapped REEs are located.

The media is silent. It is all about control of the REEs through any means necessary. To do so, I believe the United States, NATO, its puppets, and private contractors, militias, and mercenaries are committing war crimes and terrorist acts against the Pashtun villagers.

The genocide, ethnic cleansing, massacring, torturing, raping, disappearing, slaughtering of several hundred thousand innocent Afghan/Pashtun villagers are war crimes and human rights violations. The United States, NATO, the puppet Ghani and their governments and others have committed war crimes in Afghanistan during these past fifteen years.

It includes former President George W. Bush, Vice President Cheney, President Obama, NATO Secretary General Anders Fogh Rasmusson and other top officials and military leaders in their administrations . If you look at the definition of terrorism, I believe these are the real terrorists, who have and are terrorizing the Afghan civilians especially in the Pashtun villages.

On February 16, 2015, the United States’ private contractors/ mercenaries and the Afghan puppet Ghani government bulldozed one hundred homes, destroyed two hundred shops and bombed an elementary school with a drone killing Pashtun children in the Village of Malmand in Helmand Province. These are war crimes.

On February 1, 2015 in Qisar district of northern Faryab province about 200 Aghan homes were bulldozed destroyed by the puppet Ghani’s Afghan army. Some civilians were killed including women and children. These war crimes need to be investigated and prosecuted.

On January 1, 2015, more than fifty Afghan/Pashtun civilians, many women and children, were targeted and killed, while attending a wedding in Sangin District in Helmand Province. When will the perpetrators of these war crimes be prosecuted?

On December 10, 2014, a U.S. led drone strike killed five students in the Ghorband Seyagard District of Parwan Province. Local villagers say the students, who were between 12 and 16 years old, were preparing for their yearly exams outside in the field. Everyday all over Afghanistan these U.S. drones kill Afghan civilians especially Pashtun tribal leaders, religious scholars and students. These are war crimes!

Anyone, who has with knowledge about what is happening on the ground, knows that the Pashtun tribal leaders , Pashtun intellectuals and religious leaders are being killed and eliminated by the U.S. and its puppets with their weapon of choice being drones.

The Pashtun villagers are being raped, killed and forced out of their homes after their villages are bulldozed or bombed, especially in the Helmand region because the Pashtun’s land contains the largest untapped REEs worth trillions. The U.S. and its puppets are destroying their villages, killing those who defend themselves, raping the women and children and forcing them to leave. These tactics sound really familiar to me.

I believe history does repeat itself. This U.S. imperialistic campaign of genocide against the native Pashtun tribe and the theft of the Pashtun’s home land and REEs is exactly what the United States has done to the Native American tribes in the U.S. in the past centuries. The U.S. tactics of killing the leaders of the Native American tribes, who resisted occupation, is being implemented today in the Pashun villages.

Even today Native American tribes experience their lands being taken because of minerals deposits like valuable gold. The U.S. tactics of forced relocation , theft of the native tribe’s land rich in valuable resources, and divide and conquer are being implemented against the native Pashtun tribe, who pose the only threat to the United States’ achievement of its t goals.

It reminds me of the forced relocation of the Cherokee Native American tribe , who resisted the U.S. invader/occupier in the 19th century. In 1824-25, the U.S. killed the Cherokee leaders, seized the valuable Cherokee land, and forced the Cherokees to relocate to undesirable, strange land called the “Indian territory.”

This war crime is referred to as the “Trail of Tears”. Does this sound familiar? Now, a few greedy Afghan puppets are signing agreements with the U.S., Pashtun land rich in REEs is being seized with villages destroyed , Pashtun tribal leaders are being killed, and Pashtuns are being forcefully relocated to “tribal” territory.

I will say it again! It really is about the U.S. and NATO having direct access and control over Afghanistan’s vast untapped Rare Earth Elements (REEs), which are worth trillions . These REEs are vital to the manufacture of technology and defense systems. Lithium is one of the REEs used for batteries, laptops etc. .

That is why Afghanistan is referred to by the U.S. Pentagon in one of its internal memorandum as the “”Saudi Arabia of Lithium”. The U.S. sent down geologists with special operations forces into the REE deposits of the Helmand region at the start of the invasion. The U.S. even knew about these REEs deposits before the war. I believe that is the real reason for the invasion, continued occupation and covert war and genocide against the Pashtun villagers.

The New York Times wrote an article about the REEs in 2010 in which it referred to Afghanistan as becoming “…one of the most important mining centers in the world, the United States officials believe.” It is not about fighting terrorism. It is about the U.S. fighting for control of the Afghan people’s REEs.

It is obvious that the U.S. and NATO will fight anyone that gets in their way. The Pashtun villagers are in their way because this REE rich-land is their land and as history has shown they cherish their freedom and defend their homeland. I believe this is why genocide and other war crimes are being committed now against the Afghan/Pashtun villagers .

I believe the Pashtun people need to wake up and unite to lawfully stop this genocide and bring the perpetrators of these war crimes and architects of this war and occupation to justice in lawful tribunals.

Please investigate and document these war crimes being committed against Afghans especially the Pashtun villagers. Please help me bring justice for these victims in lawful tribunals. Please help me stop this war and genocide.