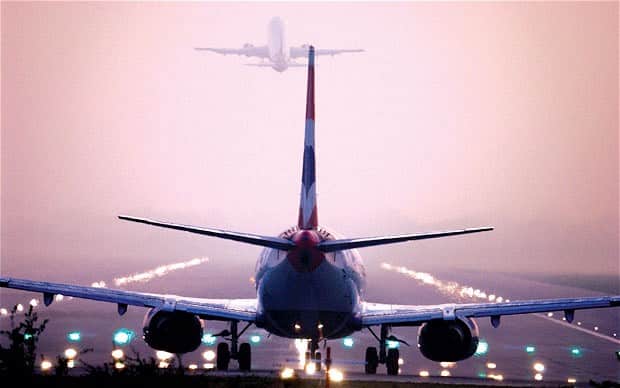 If you’re planning a plane trip soon you need to know about a condition that can cause airline pilots to develop brain fog and become confused and disoriented during flights. It’s known as aerotoxic syndrome. Tristan Loraine, former pilot and founder of the Aerotoxic Association, has documented dozens of cases (and two deaths) among pilots and cabin crews. It can also affect passengers and is suspected as the cause of unexplained midair collisions.

A Dorset (UK) coroner investigating the 2012 death of a British Airways pilot Richard Westgate has brought the issue to mainstream media attention by calling on British Airways and Britain’s Civil Aviation authority to take “urgent action to prevent future deaths.”  Frank Cannon, the lawyer for the Westgate case, also represents fifty other air crew, employed by several different airlines, affected by the condition.

The Cause of Aerotoxic Syndrome

Although aircraft manufacturers have known about the problem for decades, the term “aerotoxic syndrome” was first coined in 1999 by doctors treating air crews for the condition. The cause of the condition is repeated exposure to organophosphates* (as well as hundreds of carcinogens) that leak into the air used for pressurization. Sufferers typically show elevated levels of the organophosphate tricresyl phosphate (TCP) in their blood.

Commercial passenger planes compress air from the engines to pressurize the cockpit and cabin. There are seals meant to separate engine oil and so-called “bleed air,” but these commonly leak with age (most airlines rely mainly on aircraft that are fifteen to twenty years old) and inadequate maintenance. A recent 60 Minutes-Australia investigation found contaminated air in 50% of the aircraft they tested. The clip above also cites a 2007 memo by a senior Boeing inspector warning that “lives need to be lost” before Boeing takes action on preventing aerotoxic syndrome.

Lorrine sees the introduction of Boeing’s new 787 Dreamliner — the first and only new commercial jet in which air isn’t drawn from the engines — as an admission of the risk by the airlines. The former pilot, who has made a documentary about aerotoxic syndrome, insists at minimum airlines should install organophosphate detectors in their cabins and cockpits. He claims the reason they refuse to do so is because they would go off all the time and alarm passengers.

He also points out that current aircraft could be fitted with filtration systems at a cost of no more than £20,000 each.

The FAA Position on Aerotoxic Syndrome

The following paragraph summarizes their findings:

The FAA conducted a safety database assessment (i.e. a computer search of the airlines own data) of airliner cabin air quality events involving 121 commercial air line operators. The results of the analysis indicate an extremely low occurrence involving bleed air contamination from engine oil or hydraulic fluid. While there are reports of purported personal injury in news media, medical privacy laws such as the Health Insurance Portability and Accountability Act of 1996 prohibit the FAA from obtaining corroborating data which could be used to determine a causative relationship between air contaminant events and associated risk to passenger and flightdeck crew health

In other words, instead of testing the air quality of passenger airlines like 60 Minutes Australia, they merely rely on the airlines’ data to conclude the problem was non-existent.

The Significance of Genetic Variability

Like British and Australian regulators, the FAA is using broad statistical sampling to argue the so-called aerotoxic syndrome is no more prevalent in air crew than the general population – therefore it doesn’t exist. The fallacy here is that people have enormous genetic variability in their capacity to metabolize organophosphates. Paraoxonase (PON1) is one enzyme that inactivates some organophosphates through hydrolysis.  A 2006 report found a 13-fold variation in adults in PON1 levels and efficacy.

It logically follows that individuals with low PON1 levels are at higher risk of developing aerotoxic syndrome with repeated exposure to TCP.

Safer than Childbirth in Africa

The good news here is that air travel is probably safer than drinking arsenic or childbirth in Africa. However it’s clearly not as safe as airlines and regulators would lead us to believe. Those with urgent and compelling reasons to get on a commercial jet should either make sure it’s a Dreamliner or bring their own oxygen tank.