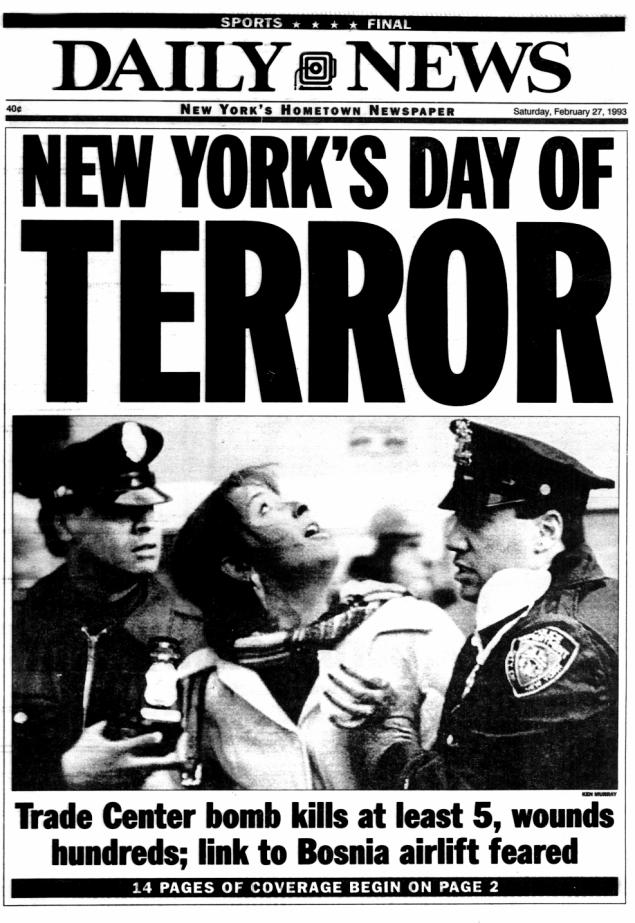 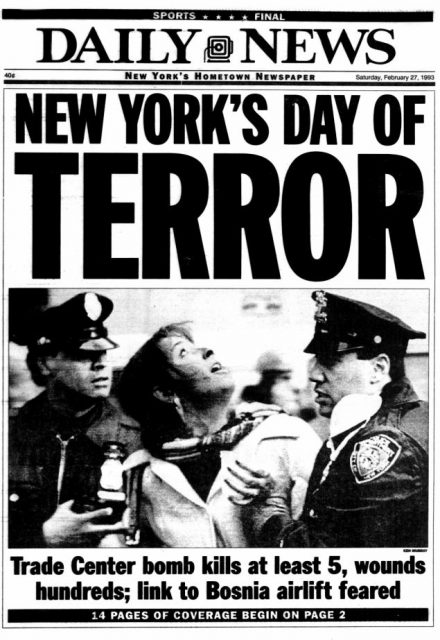 Every year on September 11th, the sheeple hold their pseudo-religious commemoration of the crucifixion of the Twin Towers and the Pentagon.

But today, February 26th, is an equally significant anniversary.

The crime wave of false-flag “Islamic terror” did not begin on 9/11/2001. The first major staged terror event blamed on Muslims was the February 26th, 1993 bombing of the World Trade Center – when six people were killed, and over 1,000 injured, by a 1,200 pound truck bomb assembled and detonated by the FBI.

The bombing was orchestrated by Emad Salem, an Egyptian intelligence agent on loan to the FBI’s New York Bureau. Salem’s job was to recruit useful idiots and patsies for the FBI’s plot to bomb the World Trade Center.

But Salem believed the whole thing was just a sting operation. He was told that the “bomb” the FBI would supply was going to be a dud. But not being stupid enough to fully trust the FBI, Salem secretly recorded many of his conversations with his handlers.

When the devastating explosion rocked the WTC parking garage, causing so many deaths and injuries, Salem was furious. He surreptitiously recorded a conversation with his FBI controller demanding to know why the FBI hadn’t used a fake bomb as it had promised.

Some of the patsies blamed for the 1993 bombing were completely innocent of any involvement. For example, Mohammed A. Salameh returned three times to the Ryder Truck Rental demanding a refund of his $400 cash deposit on the truck the FBI blew up. Had he been a terrorist who knew he had rented a truck that would be used as a bomb, he obviously would not have done that.

The historical significance of the FBI’s bombing of the World Trade Center was not yet apparent in 1993. Since the internet was in its infancy, few learned that the FBI, not “radical Islamic extremists,” was the culprit,   And nobody realized that a tidal wave of false-flag terror was about to wash over the world, drowning freedom and prosperity, launching Orwellian endless wars, and turning Western nations into militarized police states.

Professor Lance DeHaven-Smith has pointed out that State Crimes Against Democracy (SCADS) are typically misunderstood as stand-alone events, when actually they are part of chains or series of linked events. For example, despite obvious circumstantial evidence that John and Robert Kennedy were killed by the same people (right-wing US military and intelligence personnel backed by conservative oligarchs) for the same reasons (to maintain the Cold War in general and the Vietnam war in particular – and perhaps to enable the Israeli bomb) the two assassinations are “seen as entirely unrelated.”

Another series of interrelated State Crimes Against Democracy (SCADS) is the false flag terror crime wave that’s driving the War on Islam for Israel. From the FBI’s World Trade Center bombing of  February 26th, 1993, to the “al-Qaeda” attacks on the US embassies in Dar es Salaam and Nairobi in 1998, to the attack on the USS Cole in October 2000, to the subsequent false flag atrocities of 9/11-anthrax, Bali, Madrid, London, and Mumbai, to the Fort Hood shooter, the underwear bomber, the Boston Marathon bombing, the Times Square bomb attempt, the chemical weapons attack at al-Ghouta, Syria, and “Islamic State” atrocities and beheading videos, and the recent Canada-Australia-Paris-Copenhagen false flag road show, the ongoing phenomenon of extremist, apparently strategically counterproductive terror attributed to “radical Islam” – but orchestrated by enemies of Islam – demands to be considered as a unified phenomenon, not a series of isolated events.

Twenty-two years of false flag pseudo-Islamist terror: All following the blueprint drawn up by Netanyahu and his guests at the 1979 Jerusalem Conference on International Terrorism (JCIT).

Back at 1982, at my alma mater San Francisco State University, Philip Paull wrote a brilliant MA thesis explaining how, in the words of Nafeez Ahmed:

“…a group of powerful elites from various countries gathered at an international conference in Jerusalem to promote and exploit the idea of ‘international terrorism.’ The (Jerusalem) conference (on International Terrorism, or JCIT) established the ideological foundations for the ‘war on terror.’ JCIT’s defining theme was that international terrorism constituted an organized political movement whose ultimate origin was in the Soviet Union. [That’s how it looked in 1982 – how could Paull have known they were going to make Islam the next Enemy of Western Civilization? -KB] All terrorist groups were ultimately products of, and could be traced back to, this single source, which-according to the JCIT-provided financial, military, and logistical assistance to disparate terrorist movements around the globe. [Shades of al-Qaeda, ISIS, “Jihadism,” etc. -KB] The mortal danger to Western security and democracy posed by the worldwide scope of this international terrorist movement required an appropriate worldwide anti-terrorism offensive, consisting of the mutual coordination of Western military intelligence services.”

According to Philip Paull, Bibi’s guests at the 1979 JCIT Conference were: “Present and former members of the Israeli and United States governments, new right politicians, high-ranking former United States and Israeli intelligence officers, the anti-détente, pro-Cold War group associated with the policies of Senator Henry M. Jackson-a group of neoconservative journalists and intellectuals-and reactionary British and French politicians and publicists.”

A decade later, the Cold War ended. A few years after that, the February 26th 1993 World Trade Center bombing launched the JCIT-hatched “War on Terror.”

Ashton Carter, the current Secretary of Defense, and Philip Zelikow, the expert in “construction and maintenance of public myths,” collaborated on a 1998 article in Foreign Affairs magazine that displayed their foreknowledge of 9/11. In that article, using the 1993 WTC bombing as their springboard, Carter and Zelikow speculated on the likely results of a massive Pearl Harbor style terrorist event such as the destruction of the World Trade Center.

Such a New Pearl Harbor, they said, would split time into a before and an after. The after would be a militarized gulag society that could easily be stampeded into a series of wars against any obstacles to Greater Israel’s regional hegemony.

Today, 22 years after the first WTC bombing, and 13 1/2 years after 9/11, the scam continues: 9/11 treason suspect Ash Carter is pursuing a phony war against ISIS. The US, through its ally Britain, is airlifting weapons to ISIS – as the Iraqi government charged after shooting down two of the British planes. And the US and Turkey, which created and sustained ISIS with Israeli help, are sending still more arms to ISIS under the pretext of…get this…fighting ISIS. As Jim Dean says, you just can’t make this stuff up.

The phony terror outbreak that erupted on 2/26/1993 apparently hasn’t ended yet. Ole Dammegard, who predicted the Copenhagen false flag event the day before it happened on my radio show, thinks Italy may be the next target.

Italy? That’s where the US/NATO high command murdered 85 people at the Bologna train station in 1980. That false flag bombing was attributed to the enemy du jour, “left wing terrorists.”  It was part of Operation Gladio, the precursor to the current wave of phony “Islamic” terror which some have labeled Gladio B.

So if Ole is right, Gladio B and Gladio are about to come full circle.