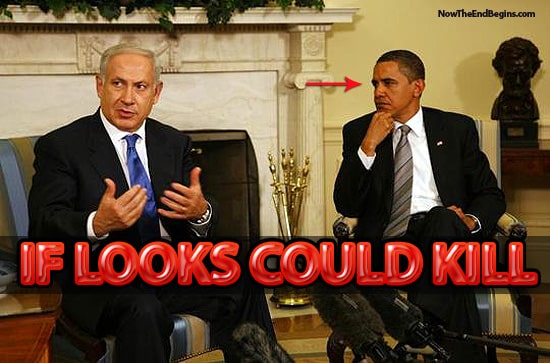 I am writing to request that you rendition Netanyahu and send him to Guantanamo.

Or better yet, hit him with a predator drone.

Bibi is in Washington now. The Pentagon, the CIA, and some well-equipped military bases are just miles away. Rendition teams and predator drones are ready, available, and standing by, avidly awaiting the opportunity to strike. This is your chance!

Normally I am not a fan of extraordinary renditions and predator drones. But in this case I would make an exception…one of those “Carl Schmitt exceptions” if you know what I mean, and I think you do.

Gitmo, drones, the whole nine yards…it’s all about the “war on terror,” right? Well, who is the biggest, nastiest terrorist on the planet? I’ll give you a hint: It sure as hell isn’t Abu Bakr al-Baghdadi or Ayman al-Zawahiri or some poor innocent little kid whose dad happens to be some harmless “useful idiot” like Anwar al-Awlaki.

Thus far, 99% of the people you’ve murdered with predator drones or kidnapped, tortured and sent to Guantanamo have been innocent. The other 1% have been heroes brave enough to defend their countries against invasion and occupation.

You’ve been droning and renditioning the wrong people.

Let’s face it, the whole idea of murdering and disappearing people, with no due process and in blatant violation of the US Constitution and the Geneva Conventions, is deeply questionable. But since we’ve already bankrupted ourselves by spending $15 trillion on this so-called war on terror, we might as well get something for our money.

We might as well take out at least ONE real terrorist.

And it might as well be the most vicious, dangerous, evil terrorist on earth.

Now I do realize that you are probably thinking, “That’s a hell of a good idea, Barrett. But is it politically feasible? If I send a drone after Bibi and turn him into a cloud of pink mist, a fate he so richly deserves, won’t Karl Rove find some way to use it against the Democrats in the 2016 elections?”

My response, paraphrasing James Baker, is: “F*** the Likudniks. They don’t vote for us anyway.”

And while Sheldon Adelson and a tiny fraction of America’s Jewish population would be heartbroken, most of the world would react to the news of Netanyahu’s demise quite a bit more favorably:

There is only one downside: If we drone him, we won’t get a chance to waterboard him.

So maybe we should take the “compassionate approach” and just rendition the bastard.

It’s your choice, Barry. You’re the Commander-in-Chief (a fact most of Congress seems to have forgotten). You’re the Decider, as your predecessor so eloquently put it.

You don’t have to put up with any more sh*t from that psychopathic furniture salesman.

Thanks to Bibi’s nuking the World Trade Center on 9/11, you inherited “special powers.” Go ahead and use them!

You now have the legal right to kill or disappear anyone on earth, American citizen or foreign head of state. Maybe it’s time to use those powers to solve the real problem, eliminate the real terrorist threat, and set the stage for a return to Constitutional governance.

Sincerely (I wish I was joking)