The world’s most powerful investment bank is a great vampire squid wrapped around the face of humanity, relentlessly jamming it’s blood funnel into anything that smells like money.” Matt Taibbi, Rolling Stone 2009 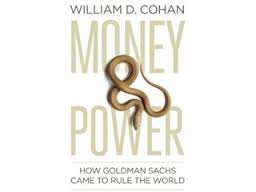 Sachs for causing the Great Depression, the Internet bubble and the skyrocketing price of gasoline. Author William D Cohan dismisses the article as a “screed” and “conspiracy theory journalism.” Yet after reading Cohan’s 604-page Money and Power: How Goldman Sachs Came to Rule the World, I have to agree with Taibbi. For over 133 years, the secret of Goldman’s success has been an uncanny ability to extract a fee from any transaction involving human need.

It’s hard to read a book like this without understanding the complicated derivatives trading responsible for the 2008 Wall Street crash. Cohen does a credible job of explaining these complex financial trades. What comes across loud and clear is that derivatives trading is merely a sophisticated form of gambling. Like the owner of a Las Vegas casino, Goldman knows exactly how to turn the odds in their favor. This almost always entails unethical and illegal conduct. Goldman executives excel at not getting caught, which seems to be the main reason they receive such massive bonuses. They’re also really good at maximizing their high level connections in the federal government.

After reading Money and Power, I’m more convinced than ever that the only way to end Wall Street corruption is to break up the big banks by ending their ability to create money out of thin air. Once the creation and control of our money supply is rightfully restored to public control, no bank will ever be too big to fail.*

US Justice System Too Slow and Cumbersome

Goldman’s history is filled with a litany of criminal indictments and civil lawsuits stemming from unethical and illegal activities. Although both federal and state government’s have a wealth of anti-corruption laws they could use to prosecute Goldman and other Wall Street banks, the American criminal justice system is far too slow to inflict severe enough penalties the criminal activity. The close involvement of Goldman chief executives in federal government (which Cohan refers to as “government Sachs”), most notably Robert Rubin in the Clinton administration and Hank Paulson in the Bush junior administration, is also be a major factor in the bank’s enduring financial success. Remaining limited Goldman partners while holding cabinet appointments, both men were responsible for a range of federal initiatives favorable to their “former” employer.

The first federal indictment against Goldman was lodged in 1947, an antitrust lawsuit related to the fraudulent and speculative activity by Goldman and sixteen other Wall Street banks which caused the massive 1920s stock market bubble and 1929 crash. In 1929 alone, Goldman created $1.7 billion of market value through a pyramid scheme in which they resold the same shares of stock seven times. The lawsuit was dismissed in 1950 – the Department of Justice couldn’t produce convincing evidence the seventeen banks actively colluded.

Finding Charges that Would Stick


In 1970 Goldman faced over twenty lawsuits and a SEC complaint for selling commercial paper (from Penn Central Railroad and Mill Factors Corporation) when they knew it was worthless. This time the court found for the SEC and Goldman was forced to settle the civil cases.

In the late 1980s and early 1990s, Goldman lost a series of sexual discrimination suits by female traders.

In 1994, two pension funds sued Goldman for disposing of Maxwell Communications Assets and disturbing the proceeds to Maxwell’s estate rather than the pension funds. Goldman settled for $400 million after the Justice Department threatened them with criminal charges.

In 2002, Goldman faced a series of federal and state indictments related to their role in the dot com bubble. Specifically the SEC and New York attorney general Eliott Spitzer charged them with bribing independent analysts to issue favorable reports on worthless Internet stocks, as well as with “spinning and laddering”*** to drive up the share price. Goldman eventually settled with the SEC for $40 million and with the state of New York for $110 million.

The following year Spitzer charged them with fraud and “front running” (ie insider trading) in trading in non-traditional insurance products and reinsurance. Goldman settled for $800 million.

Goldman faced a rash of new indictments and lawsuits stemming from the 2007-2008 crash. In December 2007 the Massachusetts attorney general cited Goldman for selling mortgage backed securities without informing them that the mortgagees were at high rate of delinquency. Goldman settled for $10 million, as well as spending another $50 million to alter the terms of the mortgages to reduce the risk of default.

In 2010, the Securities and Exchange Commission (SEC) sued Goldman for incorrectly forecasting the performance of mortgage backed securities they sold to clients while betting against the MPS’s by purchasing credit default swaps (CDS)**** on them. Goldman began purchasing credit default swaps in February 2006 as soon as they realized the mortgage market was unraveling. Goldman settled this suit for a record $800 million.

Goldman was the only Wall Street bank not to suffer major losses in 2007 and 2008. Because of their massive holding holdings in credit default swaps, they easily absorbed losses from mortgage backed securities that became worthless when real estate values crashed and mortgages became delinquent.

Goldman CEO Lloyd Blankfein argued against receiving a TARP bailout because they obviously didn’t need it. Treasurer Secretary Hank Paulson insisted they take a $10 billion bailout anyway to “inspire investor confidence.” Goldman repaid it with a 23.5% annualized dividend in July 2009 – banks with outstanding TARP loans were restricted in the size of CEO bonuses they could pay.

Goldman would also receive $14 billion of the bailout AIG insurance received. This covered the credit default swaps AIG had sold them.

*See An IMF Proposal to Ban Banks from Creating Money
**Eliot Spitzer was one of the few government prosecutors willing to go after Wall Street banks for white collar crime. His popularity resulted in his election as governor of New York in 2007. The banks fought back behind the scene and forced his resignation in 2008 by exposing his involvement with a high end prostitution ring. This is described in the 2010 documentary The Rise and Fall of Eliot Spitzer
***”Spinning,” which is illegal, is defined as the offering of free or discounted IPO (initial public offering) shares to executives of an outside company, in the hope they will influence the company to buy additional shares at an inflated price. “Laddering” is another illegal practice in which underwriters and clients collude to drive up share prices (by trading them at inflated prices) and selling them once they hook in enough suckers. Many analysts suspected laddering occurred in the Amazon initial public offering (IPO), with the share price bottoming out when all the insiders sold their shares.
****A credit default swap (CDS) is a type of insurance, a bet that pays off if a particular security goes belly up. CDS’s are traded like other derivatives and you don’t have to own the security for the CDS to pay off.