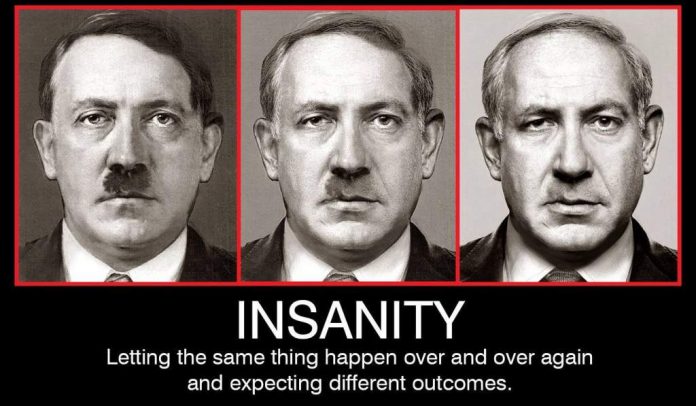 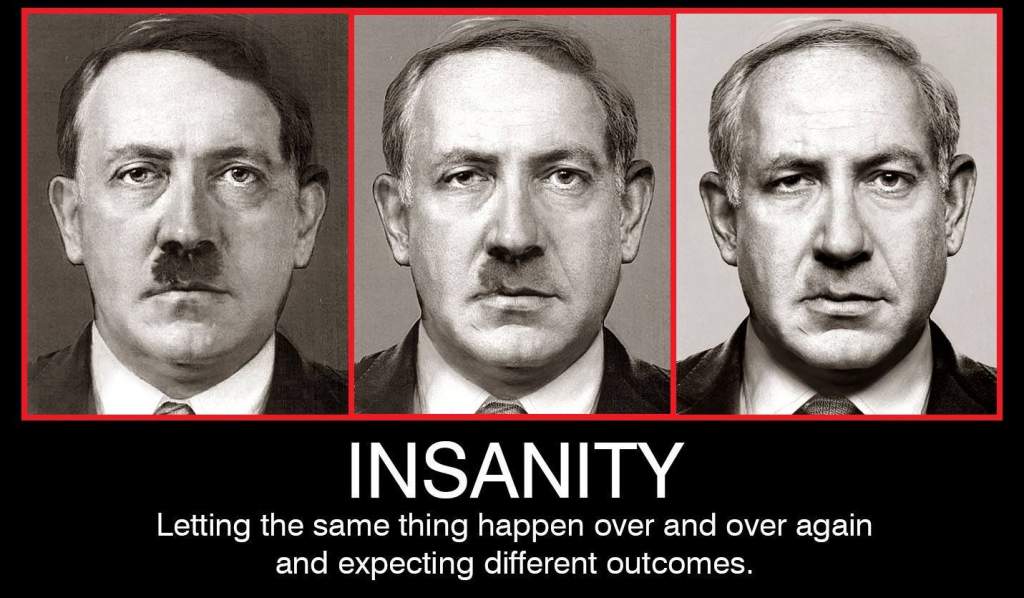 Holding on to hatred eventually poisons the instigator and they eventually become exactly what they are railing against and in this case Israel Prime Minister Bibi Netanyahu has become the embodiment of everything he despises and distrusts with Iran ~ and in the process it becomes obvious that Israel is fast becoming the very same rogue undeclared nuclear, fascist, deceptive and evil state that Netanyahu has been warning the world against: Allen L Roland, Ph.D

The world is rapidly changing and Israel’s Prime Minister Bibi Netanyahu refuses to accept it and instead rides his nuclear armed war chariot of fear, isolation and deception against a growing wave of altruism and social cooperation ~ which are the driving forces of evolution.

Bibi’s problem is he believes that peace cannot be maintained without regional dominance and military power and he sees it slipping away and is determined to maintain that old world order at any cost ~ even Israel’s important ties with the United  States. 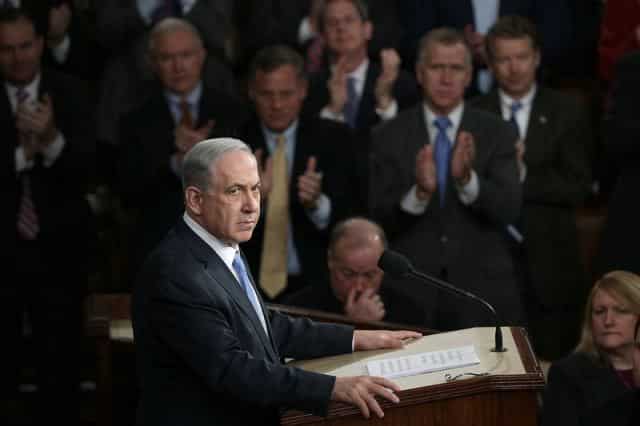 The problem is that consummate liar Bibi does not have a credible moral leg to stand on and is increasingly becoming the highly visible rogue threat he is warning the world against ~ a world that is increasingly tired of war and conflict and seeks a far more positive choice of altruism and social cooperation particularly with the growing universal threat of climate change.

Bibi’s deceptive showboat chutzpah moment speaking to Congress was a desperate attempt to not only hold on to power but to remain relevant in a rapidly changing world that is committed to co-existence and increasingly getting tired of his deceptive message of fear, retaliation, separation and hatred.

The New York Times correctly writes today ~ “In our view, Mr. Netanyahu has consistently used these nuclear false alarms and outlandish claims both to serve his domestic political maneuvering and to create a smoke screen that relegates the Palestinian question to the margins. We have noted how his rhetoric has intensified in proportion to the international pressure on Israel to stop the settlement activity and end the occupation of the Palestinian territory… The paradox of the situation is that a government that has built a stockpile of nuclear weapons, rejected calls to establish a nuclear-weapons-free zone in the Middle East, made military incursions into neighboring states and flouted international law by keeping the lands of other nations under occupation now makes such a big fuss over a country, Iran, that has not invaded another country since America became a sovereign nation…. and During the quarter-century that Mr. Netanyahu and his allies have tried to keep Iran’s nuclear program at the forefront of the global agenda, they increased the number of illegal settlers in the West Bank and East Jerusalem to more than 750,000 from about 300,000.”   New York Times Op Ed

Here’s what the Tehran Times had to say about Bibi’s speech ~ “What was surprising and painful was the U.S. Legislators applauded repeatedly for a man whose mind is obsessed with hatred and his criminal record (Gaza and Palestine) are obvious to the entire world. American politicians and people should realize that their country is a victim of Israeli atrocities in the Middle East ~ the September 11 attacks of 2001 are a clear example. Israeli policies in the middle East have been fueling terrorism and extremism in the region ~ and since this Israeli regime is backed by the U.S. ~ terrorists seek every opportunity to vent their anger on American citizens.” 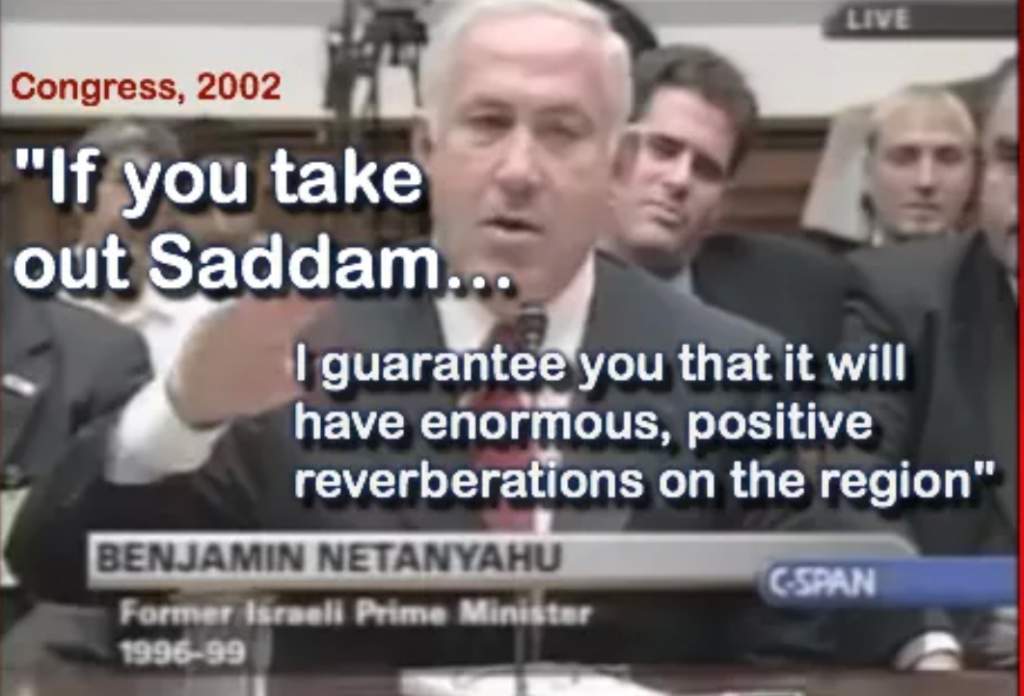 Prime Minister Netanyahu has a well known history of lying with conviction which goes back to 2002 and arguing to Congress about taking out Saddam and his non-existent nuclear weapons. See speech

Remember how Bibi got on stage at the UN in 2012 and pretentiously drew a red line for the world on Iran’s nuclear abilities. Well, Mossad knew at that time the maximum level of enrichment Iran could reach was only 20 percent, according to leaks obtained by The Guardian and Al Jazeera, while Bibi told a global audience that Iran had gone well over 70 percent and purposely ignored his own intelligence ~ sounds familiar doesn’t it ~ like right out of Dick Cheney’s playbook.

But much more telling are the words of Uri Avnery, Israeli journalist, writer, peace activist, a former Knesset member, and the founder of Gush Shalom, who astutely comments on the propaganda spectacle of Bibi’s recent speech to Congress;

“I cannot imagine any more effective election propaganda. Using the Congress of the United States of America as a propaganda prop is a stroke of genius.

It means almost literally spitting in the face of President Obama. I don’t think there was ever anything like it. The prime minister of a small vassal country, dependent on the US for practically everything, comes to the capital of the US to openly challenge its President, in effect branding him a cheat and a liar. His host is the opposition party.

Like Abraham, who was ready to slaughter his son to please God, Netanyahu is ready to sacrifice Israel’s most vital interests for election victory.

For many years, Israeli ambassadors and other functionaries have toiled mightily to enlist both the White House and the Congress in the service of Israel. When Ambassador Yitzhak Rabin came to Washington and found that the support for Israel was centered in the Congress, he made a large – and successful – effort to win over the Nixon White House.

AIPAC and other Jewish organizations have worked for generations to secure the support of both American parties and practically all senators and congress(wo)men. For years now, no politician on Capitol Hill dared to criticize Israel. It was tantamount to political suicide. The few who tried were cast into the wilderness.

And here comes Netanyahu and destroys all of this edifice for one election spectacle. He has declared war on the Democratic Party, cutting the bond that has connected Jews with this party for more than a century. Destroying the bipartisan support. Allowing Democratic politicians for the first time to criticize Israel. Breaking a generations-old taboo that may not be restored.

President Obama, who is being insulted, humiliated and obstructed in his most cherished policy move, the agreement with Iran, would be superhuman if he did not brood on revenge. Even a movement of his little finger could hurt Israel grievously.

Does Netanyahu care? Of course he cares. But he cares more about his reelection… Much, much more.”   See Avnery article ~

A new poll by the University of Maryland’s Program for Public Consultation and the Anwar Sadat Chair for Peace and Development shows that a clear majority of Americans ~ including 61 percent of Republicans and 66 percent of Democrats ~ favor a nuclear agreement with Iran despite the obvious political posturing by both parties as well as Netanyahu’s ongoing fear mongering, lies and deceptions.

To sum it up, Bibi Netanyahu is rapidly becoming the odd man out in a rapidly coalescing world seeking peace and social cooperation ~ hopefully the Israeli electorate will come to the same conclusion on March 17th

“Hatred does not cease by hatred, but only by love; this is the eternal rule.”  ~ Gautama Buddha, The Dhammapada: The Sayings of the Buddha