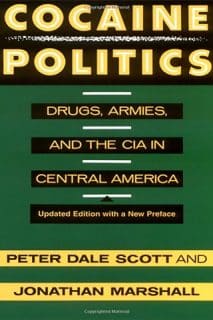 Were George Orwell still alive today, he probably would have been amazed to see that the things he put forth in his dystopian novel 1984 have come to their realization in the twenty-first century.

Just recently, the Wall Street Journal itself has reported that the “C.I.A. aided program to spy on U.S. cell phones.”[1] We are told that the program was designed to “hunt criminal suspects” or “terror suspects,”[2] but we all know that virtually every American is being targeted here.

Furthermore, we all know that the C.I.A. cannot be trusted largely because they have a long history of working with the mafia and drug dealers.[3] As Peter Dale Scott of the University of California put it,

“In country after country, from Mexico and Honduras to Panama and Peru, the CIA helped set up or consolidate intelligence agencies that became forces of repression, and whose intelligence connections to other countries greased the way for illicit drug shipments.

Although each of these cases is now public and has received scattered coverage in mainstream media, journalists (and politicians) remaind reluctant to squarely address the recurring CIA-drug problem…

“Today the United States, in the name of fighting drugs, has entered into alliances with the police, armed forces, and intelligence agencies of Colombia and Peru, forces conspicuous by their own alliances with drug traffickers in counterinsurgency operations.

“One of the most glaring and dangerous examples is in Peru. Behind Peru’s president, Alberto Fujimori, is his chief adviser Vladimiro Montesinos, the effective head of the National Intelligence Service, or SIN, an agency created and trained by the CIA in the 1960s…

We all know that the C.I.A. had a Jewish community, which included members such as Jewish feminist Gloria Steinem. Moreover, the CIA used to support former Trotskyite magazines such as Partisan Review and The New Leader.[5] People like Victor Reuther, Allard Lowenstein, Bayard Rustin, among others, were all secret agents of the C.I.A.[6]

So, whenever the C.I.A. declares that they design programs to hunt criminals, we should all have a good laugh over this.

“The cooperation began a decade ago, when the CIA arranged for the Marshals Service to receive more than $1 million in gear to conduct such surveillance… More than $100 million went into research and development of the devices.”[7]

The Justice Department is even using tax dollars to spy on millions of U.S. drivers.[8] There is more:

“Researchers working with the Central Intelligence Agency have conducted a multi-year, sustained effort to break the security of Apple’s iPhones and iPads…

“Studying both ‘physical’ and ‘non-invasive’ techniques, U.S. government-sponsored research has been aimed at discovering ways to decrypt and ultimately penetrate Apple’s encrypted firmware. This could enable spies to plant malicious code on Apple devices and seek out potential vulnerabilities in other parts of the iPhone and iPad currently masked by encryption.

“The security researchers also claimed they had created a modified version of Apple’s proprietary software development tool, Xcode, which could sneak surveillance backdoors into any apps or programs created using the tool. Xcode, which is distributed by Apple to hundreds of thousands of developers, is used to create apps that are sold through Apple’s App Store.

“The modified version of Xcode, the researchers claimed, could enable spies to steal passwords and grab messages on infected devices. Researchers also claimed the modified Xcode could ‘force all iOS applications to send embedded data to a listening post.’”[9]

Those actions, among others (including the Senate Torture Report[10]), have damaged the United States a great deal.

Now, can we seriously say that Iran is an existential threat? Are we willing to educate ourselves into imbecility by saying that Iran must be stopped while the Israeli regime is currently demolishing EU-funded shelters in Jerusalem? My dear friend Fredrick Toben just sent me an article published by the Times of Israel saying,

“Right-wing media outlet Israel National News published an opinion piece Tuesday calling on Israel to launch nuclear bombs at Iran and Germany, only days after the outlet came under fire for publishing a piece accusing a war widow of killing her husband over her pro-peace views.

“In the opinion article published Tuesday, the author claims that only through nuclear annihilation of Iran and Germany, with 20 or 30 nuclear bombs each, can Israelis prevent the state’s destruction.”[11]

Listen to the writer very carefully:

“We must make it clear to the Iranians that Israel will wipe out their nuclear program and Tehran and Isfahan as well. If [an enemy] rises up to destroy you, rise earlier to destroy him: twenty, thirty nuclear bombs will do to assure the job gets done.”[12]

Can any journalist in Iran even approach such a bold statement without serious consequences? Where are the New York Times and the Washington Post and other Zionist outlets when you really need them?

What we are seeing again and again is that Neocons and Zionist puppets believe the prevailing lie which basically says that Iran, not the Zionist machine in the United States, is the real threat. This has become so dumb and immature that Republicans sent an open letter to Iran using the Constitution!

Why didn’t those same Republicans use the Constitution to tell Benjamin Netanyahu to stay in Israel last week? Why didn’t they invoke the Founding Fathers themselves to tell Netanyahu to keep his madness at home? Listen to James Madison very carefully—and keep an eye on what the Republican party is currently doing:

“Of all the enemies to public liberty, war is, perhaps, the most to be dreaded, because it comprises and develops the germ of every other. War is the parent of armies; from these proceed debts and taxes; and armies, and debts, and taxes are the known instruments for bringing the many under the domination of the few.”[13]

In his farewell address in 1796, George Washington for example talked about “passionate attachments” with other nations

“should be excluded; and that, in place of them, just and amicable feelings towards all should be cultivated. The nation which indulges towards another a habitual hatred or a habitual fondness is in some degree a slave. It is a slave to its animosity or to its affection, either of which is sufficient to lead it astray from its duty and its interest. …”

Certainly the Republican Party was not paying attention to Washington here, and the Party proved that Washington was wiser than the puppets in the Party, who are now slaves to the Israeli regime. Washington continued,

“Harmony, liberal intercourse with all nations, are recommended by policy, humanity, and interest.

“But even our commercial policy should hold an equal and impartial hand; neither seeking nor granting exclusive favors or preferences; consulting the natural course of things; diffusing and diversifying by gentle means the streams of commerce, but forcing nothing; establishing (with powers so disposed, in order to give trade a stable course, to define the rights of our merchants, and to enable the government to support them) conventional rules of intercourse, the best that present circumstances and mutual opinion will permit, but temporary, and liable to be from time to time abandoned or varied, as experience and circumstances shall dictate; constantly keeping in view that it is folly in one nation to look for disinterested favors from another; that it must pay with a portion of its independence for whatever it may accept under that character; that, by such acceptance, it may place itself in the condition of having given equivalents for nominal favors, and yet of being reproached with ingratitude for not giving more.

“There can be no greater error than to expect or calculate upon real favors from nation to nation. It is an illusion, which experience must cure, which a just pride ought to discard.”

“Equal and exact justice to all men, of whatever state or persuasion, religious or political; peace, commerce, and honest friendship with all nations, entangling alliances with none….”

“To cherish peace and friendly intercourse with all nations having correspondent dispositions; to maintain sincere neutrality toward belligerent nations; to prefer in all cases amicable discussion and reasonable accommodation of differences to a decision of them by an appeal to arms; to exclude foreign intrigues and foreign partialities, so degrading to all countries and so baneful to free ones; to foster a spirit of independence too just to invade the rights of others, too proud to surrender our own, too liberal to indulge unworthy prejudices ourselves and too elevated not to look down upon them in others….”

In short, any country would do well to avoid wars. But the political parties in America have been so hoodwinked by the Dreadful Few that people cannot articulate moral and political principles anymore.

Members of the Republican Party in particular simply cease to have a rational thought in their heads with respect to foreign policy. They are ready to do some of the dumbest things you can ever imagine and then feel no remorse whatsoever.[14]

Members of the Republican Party simply do not have a serious vision: while they greeted Netanyahu with great accolades last week, Netanyahu went home only to be greeted with righteous anger by Israelis. Now Bibi himself is in big trouble because he did not really persuade those Israelis.[15]

If the self-proclaimed messiah is passing away politically, what will happen to members of the Republican Party, who trust this man so much that they are willing to do just about anything to please him?

What a sorry state of affairs.

[10] See for example Chelsea E. Manning, “The CIA’s torturers and the leaders who approved their actions must face the law,” Guardian, March 9, 2015.