Revealed is a network of government agencies in perpetual and secret collaboration and the military to Modify the Global climate. Created by the elitist National Academy of Sciences – decades of an inter-agency culture of secrecy explains why public discussion of covert aerosol Geoengineering (chemtrails) is a taboo topic to be degraded to the CIA status of “conspiracy theory” by a matrix of complicit bureaucrats at every opportunity.

This is why the FAA, NOAA, NASA and your local TV “meteorologist” refuse to employ scientific observation when asked to comment on a sky filled with bizarre aircraft spraying that makes no rational sense as typical water vapor contrails.

Science fraud perpetrated inside the

I can recommend that the content is understandable to most any reasonable person.  A knowledge of climate science is not necessary to understand how the multiple documented breeches of the scientific method have grown to criminal proportions.

CLIMATE-GATE is STILL THE ISSUE:

reminded audiences in 2010 that the numerous, documented acts of science fraud discovered in the 2009 “Climate-Gate incident are still with us except that the media has convinced a gullible public that lying about the science to support draconian carbon taxes and public policies infringing on civil rights, really doesn’t matter.

“This week marks the one year anniversary of the release of emails and documents from the Climatic Research Unit at the University of East Anglia that we now know as Climategate.

Sitting here now, one year later, it’s becoming difficult to remember the importance of that release of information, or even what information was actually released. Many were only introduced to the scandal through commentary in the blogosphere and many more came to know about it only weeks later, after the establishment media had a chance to assess the damage and fine tune the spin that would help allay their audience’s concern that something important had just happened. Very few have actually bothered to read the emails and documents for themselves.

Few have browsed the “Harry Read Me” file, the electronic notes of a harried programmer trying to make sense of the CRU’s databases. They have never read for themselves how temperatures in the database were “artificially adjusted to look closer to the real temperatures” or the “hundreds if not thousands of dummy stations” which somehow ended up in the database, or how the exasperated programmer resorts to expletives before admitting he made up key data on weather stations because it was impossible to tell what data was coming from what sources.” (Continue)

With the advent of nuclear weapons, access to earth orbit, global aerosol dumps and powerful ionospheric heaters – the control of earth’s climate is now in the hands of The Climate Mafia – a secret society of corrupt government agencies, criminal elite, banksters and autocratic zealots.

Evidence continues to surface that the Apollo Mission never happened but provided a coverup for secret funding of climate weapons to create what is today’s “Climate Change”. (More)

“One of them is University of Western Ontario professor AK Dewdney, founder of Scientific Professionals Investigating 9/11, who just came out this evening as a “climate change denier” (ahem). In an exclusive interview with Truth Jihad Radio, Dewdney derided the alleged IPCC consensus and spoke in favor of the alternative theory associated with the research of Henrik Svensmark. Below is Professor Dewdney’s draft of an article on the subject, which he kindly has allowed me to publish here.”

“In a nutshell, here is how the Svensmark theory works: The solar system is, at all times and from all directions, being bathed in a continuing shower of extremely energetic particles called cosmic rays. These result from the explosions of distant stars into novae and supernovae, an ongoing process which, owing to the very large number of such explosions, produces a constant shower. The terminology “cosmic ray” is something of a misnomer that dates back to the earliest research in this area. A particle is a “ray” that has undergone wave-function collapse, a central phenomenon of quantum mechanics.”

Jasper Kirkby – a PhD scientist at CERN revealed his knowledge of covert climate modification when he explained to an audience of colleagues how jet aircraft are “dumping aerosols” (aka Chemtrails) high in the atmosphere. (VIDEO)

Aircraft responsible for these aerosol dumps have been cataloged by observers equipped with high-powered camera lenses. The aircraft is this video are painted with corporate airline logos, however it’s not confirmed that passengers were actually aboard during the aerosol spraying events.

This extensive article posted on 2/22/2015 by Jim Lee at CLIMATE VIEWER succeeds in exposing most of what is known about the “real” secret space war that includes covert Climate and Bio-Engineering of planet earth.

“As the CIA pretends it does not know what is going on, the world is waiting for the real answer to the question: Who is controlling our weather?

This extensive article is designed for those who really want to know, and hopefully, for the policy makers to take seriously.  I sincerely hope you read this material, verify its validity, and spread it like wildfire.  Our time is short.”  ~ Jim Lee,  Climate Viewer  *** Continue

Published by FERAL HOUSE this book an

impressive, high quality paperback.  I’m  impressed with the notes at the bottom of each page and Elana’s writing style explaining technical issues.  There are several pages of high resolution images that add important dimension for the reader who may be new to the topic.   I recommend this important and up-to-date book as a true “gift” to family members and friends as an effective way to persuade them to drop their dumb smart-phones long enough to LOOK UP!    Full article and video interview (continue)

“We are entering a Space Age, but not the kind President Kennedy originally envisioned. This Space Age is replacing resource wars and redefines planet earth as a “battlespace” in accordance with the military doctrine of “Full-Spectrum Dominance.”

This book examines how chemtrails and ionispheric heaters like the High-frequency Active Auroral Research Project (HAARP) in Alaska services a full-spectrum dominance. This “Revolution in Military Affairs” needs an atmospheric medium to assure wireless access to the bodies and brains of anyone on Earth—from heat-seeking missiles to a form of mind control.
How sinister are these technologies? Are we being prepared for a “global village” lockdown? The recent release of NSA records have reminded Americans that “eyes in the sky” are tracking us as supercomputers record the phone calls, e-mails, internet posts, and even the brain frequencies of millions.

Elana M. Freeland’s startling book sifts through the confusion surrounding chemtrails-versus-contrails and how extreme weather is being “geo-engineered” to enrich disaster capitalists and intimidate nations.

A deconstruction of Bernard J. Eastlund’s HAARP patent points to other covert agendas, such as a global Smart Grid infrastructure that enables access to every body and brain on Earth, a “Transhumanist” future that erases lines between human and machine, and Nanobiological hybrids armed with microprocessers that infest and harm human bodies.” 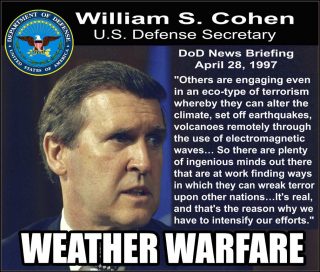 “Others [terrorists] are engaging even in an eco-type of terrorism whereby they can alter the climate, set off earthquakes, volcanoes remotely through the use of electromagnetic waves… So there are plenty of ingenious minds out there that are at work finding ways in which they can wreak terror upon other nations…It’s real, and that’s the reason why we have to intensify our [counterterrorism] efforts.”

US Air Force testifies to congressional committee that HAARP is used the “control” the ionosphere. (More)

From a rural location in Alaska, controlled by “Big Oil”, the US government is blasting billions of watts of high frequency microwave energy at our protective ionospheric shell which surrounds the earth. Their offical reason is “to see what it does”. Several acres of Alaskan land have been dedicated to the construction of the HAARP array (you can actually find a picture of it online…) but it’s real purpose runs from the practical (earth tomography (X-ray the earth to look for enemy submarines and secret underground bases)) through the hard to believe (transmission of electrical power without wires (Tesla’s idea) through the insane (the complete disruption of global communications and mucking with weather patterns by shifting the jet stream).

This book is so well documented, often citing documents published by the US government itself, that it is absolutely convincing and frightening.

Cliff Carnicom is a retired government scientist who published many original technical reports on jet aircraft aerosol emissions. His documentary Aerosol Crimes continues as the most complete examination of the covert aerosol operation to date.

Cliff published a report on The New Biology in January, 2014

Carnicom draws an unmistakable link from “Geoengineering to Bioengineering such that the lines in the sky also contains cross-domain, engineered life-forms responsible for systemic infections of what has been called “Morgellons fibers”.

This finding is so disturbing and exotic that most chemtrails/geoengineering activists avoid discussing that aspect of the covert aerosol operation, altogether. (More)

“And now we’re using our creativity in a certain direction to build fantastic machines with incredible capabilities. Maybe even one day – an entirey new species.”

Peter Warren Singer is Strategist and Senior Fellow at the New America Foundation, founder of NeoLuddite, a technology advisory firm, the author of multiple award-winning books, and a contributing editor at Popular Science. He has been named by the Smithsonian Institution-National Portrait Gallery as one of the 100 “leading innovators in the nation,” by Defense News as one of the 100 most influential people in defense issues, and by Foreign Policy to their Top 100 Global Thinkers List, of the people whose ideas most influenced the world that year. (More)

Ben Davidson is a Space Weather analyst with an online audience of 200,000 viewers.  Ben’s regular 3 to 4 minute daily updates on solar, earthquake, geophysical and weather activity are widely regarded as unique and highly professional (Complete Bio)

1 – The Climate is Changing Unexpectedly

2 – It Is Difficult to Trust What You Hear

3 – The Future is Uncertain

4 – The Entire Solar System is Shifting

5 – The Sun May Dictate Our Future

6 – Someone is Screwing With the Weather