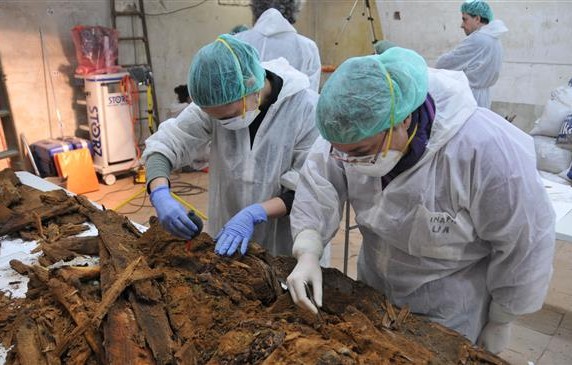 [ Editor’s Note:  This is a trip down a yellow brick road for sure. It is not everyday when the missing remains of a long lost literary great are found.

Once again, modern technology played a key role in discovering the crypt that held the bones of Cervantes and his wife.

The remains became lost in the musical chairs that happens when the original structures are rebuilt. I can just imagine the thrill when the searchers found the initial “MC” on the coffin lid.

It is hard for us to absorb the step into the unknown at that time, not knowing they would become famous for writing the first novel, beginning in 1605 — the Ingenious Gentleman Don Quixote of La Mancha.

It is always a good day when a missing grave is found. Here in Georgia, we still sometimes find a missing Sons of the American Revolution grave, and here in Atlanta, work never stops on identifying the unknown graves we have so many of where soldiers died in hospitals after the battles.

We have taken to erecting monument walls with blank space reserved for those who will be identified in the future, so their living descendants, if they care to, can learn someday where they lie… Jim W. Dean ]

The remains of Spanish literary giant Miguel de Cervantes have been discovered almost four hundred years after his demise, archaeologists and anthropologists say.

“He’s there,” said historian Fernando de Prado, referring to fragmented bones found in the floor of a crypt in Madrid, the Guardian reported on Tuesday.

The search for the remains of one of the world’s most famous literary figures began last April with a team of almost 30 scientists scouring the soil of Madrid’s Convento de las Monjas Trinitarias Descalzas with 3D scanners, infrared cameras, and ground-penetrating radar.

During their search, the team identified 33 alcoves, where the remains could have been stored, inside one of which the team located a number of adult bones.

The team said that based upon historical and archeological evidence they were confident that some of the bones were those of Cervantes and his wife, Catalina de Salazar. Moreover, the writer’s initials “MC” were found on one of the coffin lids.

“It’s an enormous satisfaction. The searching has been tiring – I feel as if I’ve arrived at the end of a long hike,” added Prado.

Forensic anthropologist Francisco Etxeberria said that DNA testing cannot verify the results because “Right now, we don’t have any DNA possibilities to compare to.”

The author was initially buried in 1616, but when the convent was rebuilt in the 17th century, his remains were lost. The crypt will be open to public next year to mark the 400th anniversary of Cervantes’ death.

Cervantes was born near Madrid in 1547 and has been labeled the father of the modern novel for The Ingenious Gentleman Don Quixote of La Mancha, the first part of which was published 1605.

The novel is said to be one of the world’s most read and translated books.