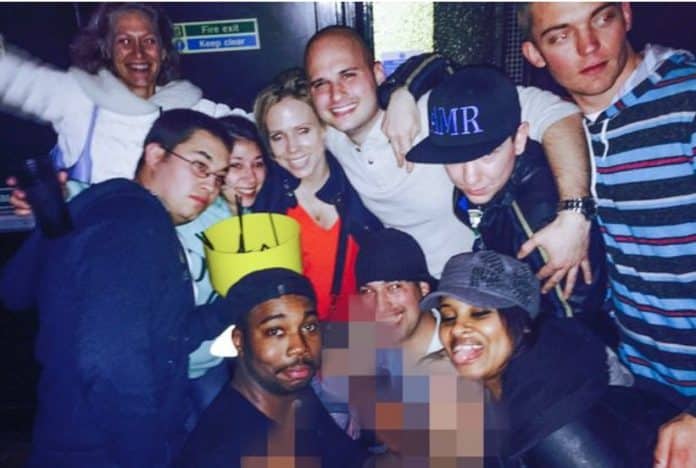 Clemmie Moodie hit the pubs and clubs of Portsmouth to help the crew of of the giant aircraft carrier paint the town red, white and blue

During the Second World War, American GIs were overpaid, over-sexed and over here.

Seventy years on, their modern-day counterparts in the US Navy are determined to do it all over again – but in 21st-century style.

Heavily tattooed, shot-drinking and with bulging muscles (and that’s just the girls ) 5,000 sailors from the aircraft carrier USS Theodore Roosevelt have been let loose in Portsmouth for five days of drinking, partying and sightseeing.

It’s like 1942 but with goldfish-bowls of booze. So, naturally, I want in.

Twitter has been getting excited about their arrival for days: “5,000 American sailors have invaded Portsmouth, i know what my plans are for this week! 😉 #oioisailor”, “American Sailors from the US Navy in portsmouth? Yes please!” and inevit­ably “That’s a lot of seamen.”

But while the military men of yesteryear wooed girls with promises of nylons, chewing gum and Coca-Cola, these guys can be a little more direct.

Like junior engineer, Jerome, 19, who points to my bottom, leans down and bellows: “Ma’am, you should be shaking that booty on the dance floor. That’s some sizeable ass.”

Livid, I head to the packed bar and queue for 20 minutes. The shaven-haired man beside me attempts to pay for his £20 round with a £5 note and looks bemused when the exasperated barmaid asks for more.

“I don’t understand your money,” explains slurring Logan from Ohio. “And everything is so expensive here. I’ve already spent £100 today, and that was just on food… oh, and a few drinks. I’m almost out of money.”

Unlike the wartime GIs, it seems these sailors, ranging from just 16 to mid-30s, are far from overpaid. But before I can explain the complexities of Her Majesty’s currency, Logan is off to grind against an attractive female colleague to the strains of P Diddy’s Shake Ya Tailfeather.

Rather than impress the locals with their dazzling dress uniforms like Richard Gere in an Officer and A Gen­­tle­man, 2015 security risks compel the US sailor to venture out in his or her civvies. Not nearly so appealing. Think hoodies, baggy jeans and fluorescent Superdry T-shirts.

After marching past a snogging couple on their way to Tiger Tiger’s disabled toilets, I move on to a nearby pub, The Victory, where a Glenn Miller tribute band (hired for the whole week) is in full swing.

Trade in pubs, bars and restaurants has leapt by 280% while the Theodore Roosevelt is in town (though it’s too big for the naval base and is moored out in the Solent in Stokes Bay).

This visit from one of the biggest ships in the world, nicknamed The Big Stick, is expected to boost the city’s economy by £1million in five days.

As the band launches into A String Of Pearls, Texan couple Shauna and Mark start an energetic jive. Bar his sleeve tattoo and her undercut, this really could be the 1940s.

But three local girls, Jackie, Clare and Sarah are unimpressed by our allies from across the pond.

Sarah, 30, says: “We thought we’d come and have a quick peek at the sailors. Jackie here wouldn’t mind having a crack at one – but I’ve not seen any remotely hot blokes. I’m disappointed.”

A 30-metre stumble from Tiger Tiger, two after-hours maritime staples, The Ship and Castle and The Ship Anson, give all members of the armed forces a 25% discount.

These pubs are the preserve of older, calmer, often married sailors. Like jet mechanic Greg from Brooklyn, who in his Union Flag woolly hat, is happy to chat over a pint of traditional ale.

“I’m married and it’s tough,” he says. “We can be away for up to 10 months of the year and that’s not easy forpartners.

“Yesterday, a couple of the guys found out they’d just become fathers but they won’t meet their kids until at least August.

“The ship is basically dry. We have a thing called Beer Day for every 40 days at sea and it literally means one bottle per person.

“So when we’re on land, the kids tend to make the most of the alcohol. The aim is to drink as much as they can, as quickly as they can, and basically make out with as many girls as they can.”

The hurdle to surmount is Cinderella Leave.

Just like in the fairytale, matelots must be back on board their floating behemoth by midnight. Any later and shore leave can be cancelled for two days.

Navigator Jonny, 27, says: “We have individual barcodes which get scanned at three different security checkpoints to make sure we’re back on time. Essentially, we are human credit cards.”

However, more confident would-be suitors looking for the hand and bed of a good English lady can presumptuously pre-book an overnight pass which lets them stay out until the next morning.

After five days of fun, games and organised sightseeing visits, the Theodore Roosevelt will set sail next week for a stint in the Middle East helping the fight against Islamic State.

But, at 10pm, that seems a long way off, and crucially, there are still two hours of quality drinking time left.

As happy sailors sup from sambuca-filled goldfish-bowl cocktails (two for one before 9pm), a minor scuffle breaks out in the other corner of the room.

“Miss, please, you need to move,” booms a man-mountain in a tight T-shirt. “Because I am going to punch this sonofabitch, and I don’t want to hurt you.” Fairly rapidly, I move.

However, his friends drag him away before any fisticuffs occur, and I later spot the two warring sailors shaking hands, bear-hugging and doing a tequila shot together.

At 11.10pm, there is a sudden mad exodus as Cinderella leave strikes. A few go back via the chippy and some stock up on the American Special, a £4.50 three-patty-and-fried-egg burger on the menu for one week only.

“Man, I love England,” beams 25-year-old Cody from Minnesota. “But I couldn’t do this all the time because it’s exhausting.

“Being in the Navy is like being in College or High School – drink, make out, pass out, be sick. I’m too old for this s***.”

I know how he feels.

Waving goodbye to my all-singing, all-laughing, all-swaying new friends – every single one of them makes it back on board on time – it is time for a few hours’ shut-eye before they do it all again tomorrow.

America, I salute you.