Home World From Gaza To Southampton – We Are All Palestinians 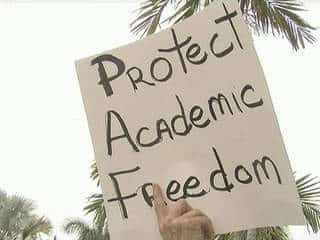 For the second time in just a month, a British academic institution has been intimidated by an orchestrated Zionist lobby.

Yesterday we learned that Southampton University has decided to withdraw its permission to hold the academic conference on International Law and the State of Israel. The decision was taken on the grounds of “health and safety” with the university claiming it did not have enough resources to mitigate the “risks.”

This comes just one month after the Royal Northern College Of Music cancelled a concert of mine for similar safety reasons. Like Southampton University, the RNCM was bullied by a violent pro-Israel group and it took us only a few hours to learn that the spokesperson for the pro-Israeli body was an infamous crook as well as a football hooligan (see here).

This raises the immediate question: Is it possible that like the Palestinians, British academia is now also subject to Zionist terror?

The vile campaign against the Southampton Conference was led by the Board Of Deputies of British Jews, a body that claims to represent Jews in Britain. So far, not one single British Jewish body has stood up for the conference and for elementary academic freedom nor has a single Jewish institution criticised the Board of Deputies’ campaign against British academic institutes.  I guess that the meaning of it is as simple as it is devastating: We now see a clear conflict between the Jewish community and those precious British values of tolerance and academic freedom.

Recently, Jewish community leaders have been concerned by the rise of anti-Semitism in Britain. In this connection, I would use this opportunity to remind them that Jewish institutional bullying of British academic institutes does not reflect well on British Jewry. In fact it has a most disastrous effect

So, as we witness this devastating continuum between Gaza and Britain we once again come to realise that the plight of the Palestinians is not an isolated event in contemporary world affairs or history.

Brits are also now subject to Zionist  terror and the meaning of it is simple: Now, more than ever we are all Palestinians.