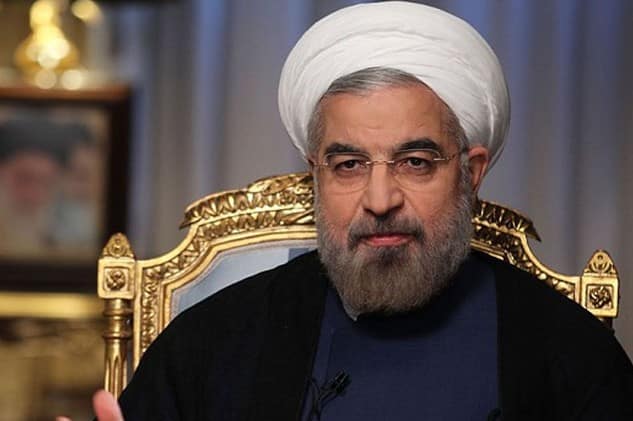 [ Editor’s Note:  These measured remarks by Rouhani are in line with his past calm and measured geopolitical demeanor. There is no showboating with this Muslim gentleman.

He is the antithesis of Bibi “the clown” Netanyahu, who is the now the world’s negative stereotype. Fortunately, despite his false claims… he does not represent all Jews.

I was happy to hear the subject of compliance involving BOTH sides finally getting some press.

But despite its being brought up now by Rouhani, there is nothing in the agreement regarding dealing with Israel’s WMD stockpiles or programs, or even insisting on the beginnings of inspections, when they are the biggest threat in the region, and always have been.

So while Netanyahu and his Congressional sockpuppets whine that a new war is bound to result from this “bad deal”, they never connect the dots as to how that is going to happen and why no one in the world views it that way, other than the aforementioned biased parties.

It is time for all of us to go on the offensive now against the self-proclaimed “Neo-Axis of Evil”, the Likud Zionists regime and their espionage wing in Congress and throughout the US, so there is no need to keep the white gloves on any more.

They will continue to undermine the final details’ last step, and then scheme to create some non-compliance scenario even after a final deal is signed. They have chosen to stand against everybody while pretending to be concerned about Mideast security. This is the attitude of gangsters, and they deserve to be treated as such… Jim W. Dean ]

Iran’s President Hassan Rouhani says the Islamic Republic will observe its obligations as per the recent joint statement agreed upon with the P5+1 countries in Switzerland, provided that the other side abides by its obligations as well.

“The world should know that we are not deceptive and are not liars and any promises we give will be within the framework of our national interests and we will live up to our promises provided that the opposite side abides by its promises as well,” Rouhani said in a televised address to the Iranian nation in the capital, Tehran, on Friday.

He added that if some day the P5+1 countries decided to choose a new path, the way would be open to the Iranian nation to make a proportionate decision as well.

The Iranian president said the nuclear negotiations are the first step toward “constructive interaction” with the world.

“We will have interaction will all those countries that want to respect the Iranian nation and work with the people of Iran within the framework of mutual interests,” he pointed out. The Iranian chief executive also noted, “There is no doubt that cooperation and interaction will benefit all.”

He said Iran seeks to improve relations with friendly countries while seeking an end to possible tensions with other states.

Rouhani added that Iran presently needs economic prosperity, employment for youth and higher non-oil exports and called on all economic activists to take action for the country to achieve these goals.

Based on the general agreement reached in Lausanne last night, “the P5+1 accepted that Iran should be able to conduct [uranium] enrichment within its own territory,” he said.

“I explicitly announce that enrichment and all our nuclear technology only aims to develop Iran. Enrichment and [nuclear] technology will not be against any countries in the region and across the world,” the Iranian president said.

He noted that Arak heavy water reactor would be equipped with state-of-the-art technology and Fordow enrichment site would remain open forever.

Over 1,000 centrifuges would be installed at Fordow where nuclear and physical activities would be conducted, he said.