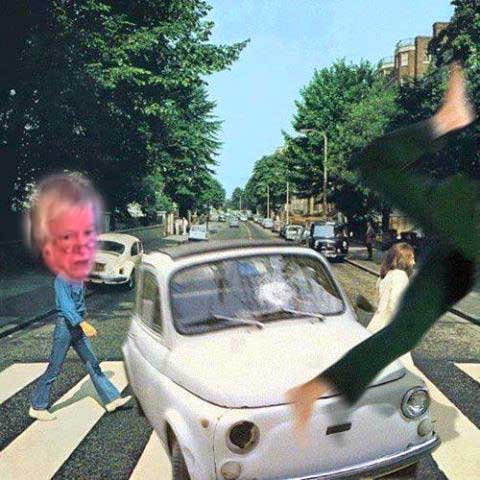 Tonight on Truth Jihad Radio (8-10 pm Eastern, FreedomSlips.com – click on Studio B) Jim Fetzer will argue that Paul McCartney died in 1966 and was replaced by a look-alike. I will argue the contrary. We will be taking calls. But here’s the catch: If you want to call in, you have to do it through Skype. Just send a Skype contact request to DrKevinBarrett with a message saying you’d like to call in. I’ll take the calls pretty much in order they’re received…

…EXCEPT there is one call I will take immediately, no matter when it is received. That is the expected call from Sir Paul McCartney – the one man who really ought to know whether he actually exists, or whether he is merely a simulacrum.

Or should I call you “Sir Paul”? That sounds pretty freaking weird, to me anyway, calling a pop star “sir.” Heck, I don’t even call former Marine Corps officers like Gordon Duff and Jim Fetzer “sir.” SIR NO SIR! And those guys, unlike you, have earned my respect. Though Jim does have a few goofy ideas. I’ll get to that shortly.

By now you’re probably wondering who I am and why I’m bothering to write you. Short version: I’m a former “famous conspiracy theorist” who got suddenly deleted from Wikipedia after publishing a book on the Charlie Hebdo false flag and getting personally attacked by the President of France. I’ll spare you the details.

As a professional “conspiracy theorist*,” I make it my business to try to figure out which of the many alleged conspiracies out there are actually true. Most of the big ones are. But not necessarily all.

You are probably aware that many people believe that you do not exist. Or, rather, that Paul McCartney no longer exists. Do you (assuming you are Paul McCartney) exist? If so, perhaps you could call in to my radio show tonight and prove it.

Frankly, I do not envy you the task of trying to convince Jim Fetzer that you exist. Jim is a very stubborn guy. Once he gets an idea in his head, he’s reluctant to let go. The more you explain to him why you took a break from touring during the summer of 1966 because you were exhausted from the grind, and how John spread the “Paul is dead” rumors as an inside joke based on the ego death you both experienced after taking LSD, the more Jim will insist that the shape of your left earlobe proves that you are not actually there.

I’m sure you’re thinking, “I don’t care how stubborn this Fetzer guy is, I can easily prove I exist.” Not so fast! I once saw Jim win this exact same type of argument. He was standing in the hallway outside a philosophy conference trying to convince his interlocutor that said interlocutor did not, in fact, exist. And you know what? He didn’t! There was nobody there but Jim, waving and gesticulating and barking out arguments in his big, booming voice. The guy he was talking to…wasn’t there. Jim had apparently argued him right out of existence!

So you, Sir Paul, are in a tough situation. If you call in to my show, you’ll have an uphill battle convincing Jim that you really do exist. But if you DON’T call in, Jim will win by default. If I don’t get a call from you tonight during the show, millions of people all over the world will say to themselves, “By golly, Jim Fetzer is right! Paul McCartney obviously does NOT exist! He didn’t even bother to call in to Kevin Barrett’s radio show and present cogent and convincing evidence of his existence!”

As you can see, the stakes couldn’t possibly be higher. The whole world awaits with bated breath the outcome of tonight’s debate. A simple call-in from you, Sir Paul, could mean  the difference between a world in which “Paul is dead” and one in which “Paul, like our hopes and dreams, is still very much alive…or at least calling in to a radio show to make an audacious and energetic argument on behalf of his own existence.”

So please send “DrKevinBarrett” a Skype contact request stating you’d like to call in to tonight’s show. The existence you save could be your own.

Dr. Kevin Barrett (the original, not a replacement…at least the last I checked)

*The derogatory term “conspiracy theorist” was invented by the CIA to smear JFK assassination skeptics. Since it’s a CIA-trademarked term, everybody should pay the Agency a nickel every time they use it. I am currently collecting nickels and will turn them over to the Agency when the pile gets as big as Leo Wanta’s slush fund. So from now on, everyone who uses the term “conspiracy theorist” must send a nickel for each use to:  CIA Nickels, POB 221, Lone Rock, WI 53556.