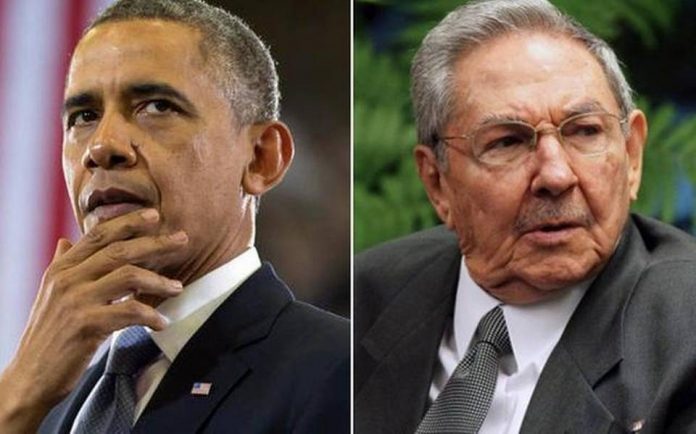 [ Editor’s Note: As the Crosby, Stills and Nash song said, “It’s been a long…long time coming,” but has finally arrived, the beginning that is. Suspicious me, it almost seems like a prank story. I am still having to wrap my mind around it.

Obama’s quote above is nice, but I am still wondering how he forgot he has been trying to overthrow Venezuela all of his administration, and has committed this country to war with Russia and China.

The Ukrainians are already dying for the Neo-Western imperialism on Russia’s Western border and many others will be joining this twisted and corrupt version of Pax Americana.

The Cuban Lobby, and the fight to have the Florida vote in the Presidential elections had unfortunately put that group in charge of American-Cuban foreign policy all of these years.

When the doors are finally wide open and families can freely travel and the Cuban economy finally has a chance to catch up, the Cuban lobby will switch places with their former homeland leaders in terms of a hostile legacy.

That might seem harsh to some, but the Cuban Lobby was responsible for a lot of unnecessary suffering when the whole world passed us by in terms of relations with Cuba. They could have done a lot more for their people if they have been willing to bury their bitterness. It is a lesson for all of us, and I look forward to visiting Cuba.

I had lived in Barbados for several years back in the nineties and the locals would not hide their concern that when Cuba was opened up that they would lose a lot of their tourism traffic to Cuba, as it had so much more to offer. One group’s gain, was another’s pain.

We had a Jamaica cleaning lady one a week, who loved coming. Why?…because her Bajan ladies were hard nosed employers,”Dey work you like a slave.”

The same could be said for Central Americans as I had a Guatemalan girl break down and cry when getting her first paycheck  for screen-printing work in Miami. When I asked her what was wrong she told me that her former Cuban employers would require a sex act be performed prior to getting a Friday paycheck. And yes, she was very attractive.

I later found out that Cubans had a reputation for being ruthless exploiters of that community. It’s a nasty world. That has also been a “long, long time coming” … Jim W. Dean ]

The presidents of the United States and Cuba have held unprecedented face-to-face talks in Panama, the first sitdown between the leaders of the two countries since 1956.

The landmark meeting, which lasted more than an hour, was held between President Barack Obama and his Cuban counterpart Raul Castro on Saturday in Panama City on the sidelines of the Summit of the Americas, amid the Obama administration’s efforts to restore ties with the Latin American country.

Obama thanked Castro for his “spirit of openness and courtesy” during their talks, while Castro emphasized that the bilateral negotiations will require patience.

“Over time, it is possible for us to turn the page and develop a new relationship between our two countries,” the US president said. “We are willing to discuss everything, but we need to be patient, very patient,” Castro said. “We might disagree on something today on which we could agree tomorrow.”

“This is obviously a historic meeting,” said Obama, adding that, after five decades of US policies that had not worked, “it was time for us to try something new. We are now in a position to move on a path toward the future,” he said.

After Obama spoke, the two leaders stood up and shook hands. On Friday night, Obama and Castro “greeted each other and shook hands” at the historic 35-nation Summit of the Americas, at a dinner ceremony.

Obama had earlier spoken by phone with Castro before heading to Panama. They discussed the ongoing negotiations between Washington and Havana, and the summit on Wednesday by telephone.

The two leaders briefly met once before, when they shook hands at the funeral of South Africa’s anti-apartheid icon Nelson Mandela in December 2013. Obama told a forum of Latin American civil society members in Panama City on Friday, hours before the start of the summit that the US will no longer interfere in Latin America.

“The days in which our agenda in this hemisphere so often presumed that the United States could meddle with impunity — those days are passed,” he said.

The United States broke off diplomatic relations with Cuba in 1961 and placed an official embargo against the country in 1962. The two countries became ideological foes soon after the 1959 revolution that brought Fidel Castro to power and their ties remained hostile even after the end of the Cold War.

On December 17, 2014, Obama announced that the US would start talks with Cuba to normalize diplomatic relations, marking the most significant shift in American foreign policy towards the communist country in over 50 years.