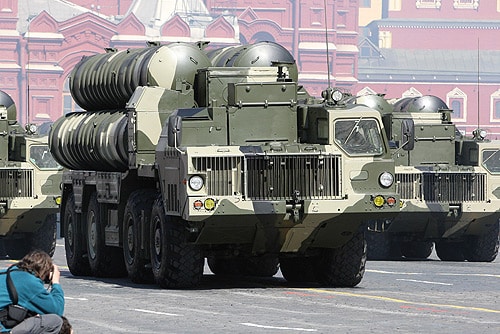 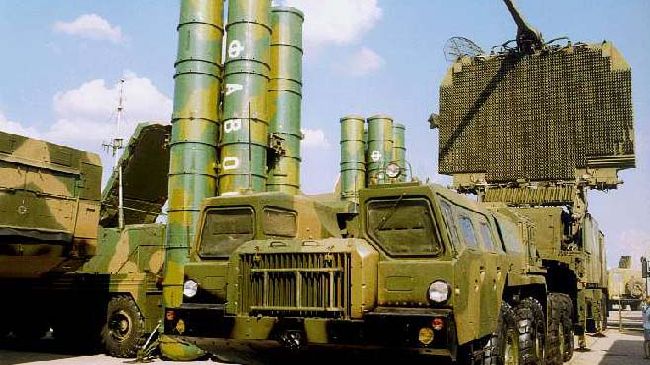 [ Editor’s Note:  This came as no surprise. Not shipping these missiles was never under any UN sanctions, so Moscow had “taketh away”, and is now giving back.

But few will miss the timing of this, with the Saudis and their rump coalition with Egypt and the Arab lessers kicking off an Iran proxy war in Yemen with no UN mandate.

The bombing continues for over three weeks now, with the usual Israeli-style tactic of group punishment, via bombing the country’s infrastructure that serves everyone, not just the Houthis. America is fully onboard with intelligence and air refueling support.

The Saudis have ignored all calls to begin any political solution discussions, preferring the military air campaign, so what better time for the Russians to announce the turning of the tide on weapons imports to Iran, the ones they need most, to defend themselves from preemptive air attack.

Israel’s comment below seemed like joke. After years of threatening an Iran preemptive attack and the US doing its “all options on the table” broken record routine, the Zios think that Iran should better spend its money on its peoples’ welfare and not weapons. You just can’t make this stuff up.

But what was surprising is the little interest shown in the media over one key item. Russia is not producing S-300s anymore and has not exported any in five years. So would Moscow fulfill the contract out of older Russian inventories? We have no way of knowing what their inventory is.

And another issues is the wide number of upgraded versions that exist for the S-300s, the top of the line ones never exported of course. Iran might be able to negotiate getting an upgraded model in return for dropping its non-delivery lawsuit.

If Israel were to attempt to strike Iran pre-emptively with its planes never returning, that would be the end of Israeli airpower in the Mideast, and the world would be a safer place.

Either way, while Iran is opening itself up to the West, which sorely needs the business, it will also be strengthening ties both military and economical with Russia, China and many other Eurasian countries.

Iran has made increasing its non-energy exports to continue fueling the country’s industrialization a key long-term economic goal. And like so many other countries, it needs to create a lot of good high tech jobs for its younger generation coming up.

Both the Russian and Iranian currencies continue to rise against the dollar and EU, blowing some big holes in the legacy of recently departed Treasury Department honcho Jack Lew. He recently took two victory laps, before moving over to the CIA for destroying the Iranian and Russian economies.

The sanctions hurt them yes, and also the EU countries, but Lew was puffing himself with his overkill swan song. Bad move Jack. No one ever remembers a good swan song speech, but they do remember the blowhard ones… Jim W. Dean ]

The Russian president has repealed the ban prohibiting the delivery of S-300 missile air defense systems to Iran, according to the Kremlin’s press service. The ban was introduced by former President Dmitry Medvedev in 2010.

“[The presidential] decree lifts the ban on transit through Russian territory, including airlift, and the export from the Russian Federation to the Islamic Republic of Iran, and also the transfer to the Islamic Republic of Iran outside the territory of the Russian Federation, both by sea and by air, of air defense missile systems S-300,” says the information note accompanying the document, RIA Novosti reported.

The decree enters into force upon the president’s signature. Russian Foreign Minister Sergey Lavrov commented on the decision, saying that Moscow’s voluntary embargo on S-300 deliveries was no longer necessary, due to the progress in Iran’s nuclear talks made in Lausanne on April 2.

During the talks in Switzerland, the P5+1 group have made “substantial progress in resolving the Iranian nuclear program,” Lavrov said. “The political framework of the final deal agreed upon was highly praised by the international community.” He added: “We believe that at this stage there is no longer need for this kind of embargo – from the Russian side it was unilateral and voluntary.”

The foreign minister also said: “Meanwhile, a modern air defense system is now very relevant to Iran, especially taking into account the severe escalation of tensions in neighboring areas and especially the rapid development of military activity in Yemen in recent weeks.”

Lavrov added that the S-300 is an air defense missile system, which is of a purely defensive nature. It is not designed for attacks and “will not put at risk the security of any state in the region, including Israel,” he said.

Iran’s defense minister said on Monday that Russia’s decision will boost cooperation with Moscow and could help regional stability.

Commenting on Russia’s move, US State Department spokeswoman Marie Harf said on Monday that US officials do not think this would affect the major powers’ unity in ongoing nuclear talks. She added that Russian deliveries of the S-300 would not violate Iranian sanctions imposed by the UN Security Council.

Israel has denounced Russia’s decision to lift the ban on providing S-300 missiles to Iran.

“This is a direct result of the legitimacy that Iran is receiving from the nuclear deal that is being prepared, and proof that the Iranian economic growth which follows the lifting of sanctions will be exploited for arming itself and not for the welfare of the Iranian people,” Intelligence Minister Yuval Steinitz said in a statement on Monday.

The contract for supplying S-300 missile systems to Iran was signed in 2007 and implied the delivery of five S-300 squadrons worth $800 million. But in 2010 the contract was put on hold due to the UN imposing sanctions on Iran.

Tehran answered with filing a nearly $4 billion lawsuit against Russia’s Rosoboronexport arms dealer company to a Geneva arbitration tribunal. The question of S-300 supply to Tehran remained unsettled for years.

After years of negotiation, in February 2015, Moscow offered Tehran the chance to buy its latest Antey-2500 anti-aircraft and ballistic missile system, instead of the older S-300 system. Iran replied that it would consider the offer.

The last time Russia supplied S-300 systems abroad was in 2010, when 15 squadrons were delivered to China.

Since then production of S-300 systems has been suspended as the main producer of the Russian air defenses, concern Almaz-Antey, has launched production of the next generation systems, S-400. China has become the first country allowed to buy S-400 systems, Rosoboronexport chief Anatoly Isaykin told the Russian media.

As of today, S-300 systems have been operable in a number of countries, including Algeria, Azerbaijan, Belarus, Cyprus, Kazakhstan and Vietnam. There is a valid contract to deliver S-300 systems to Syria, but it was put on hold after the beginning of the civil war in the country.