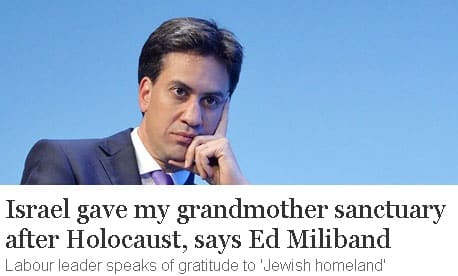 Just a few month ago, in a speech in front of the Labour Friends Of Israel Lobby group, Ed Miliband – the Labour party’s current leader, produced one of the most embarrassing statements  in the history of modern British politics:

“I want you to know”, Miliband told The Lobby, “that if I become Prime Minister in less than a year’s time, I will be proud to do so as a friend of Israel, a Jew and, most of all, someone who feels so proud to be part of the community gathered here today.”  (http://press.labour.org.uk/post/89056233474/ed-miliband-speech-to-labour-friends-of-israel)

I guess that many British people would actually expect their Labour party candidate to be primarily a ‘proud Brit’ as well as a friend of the Kingdom. I would have loved to believe that such a clumsy statement on Miliband’s part would be enough for the Labour party to expel the man from its ranks. After all, the above statement proves that more than anything, Ed is much more ‘Blue & White’ than ‘simply Red,’ let alone a British patriot.

Surprise surprise, Labour didn’t react at all. Even the British public, known for its tolerance, was very forgiving. Funny enough, it is the Jews who actually dumped Ed Miliband, they do not believe him nor do they like him at all.

A poll published last week in the Jewish Chronicle revealed that an overwhelming majority of Jews prefer the Conservatives over Labour. 69 percent of Jews questioned said they were going to vote for David Cameron’s Tories. Only 22 percent sided with Labour and Ed Miliband.

Rather than voting for Labour under the leadership of the man who vowed ‘as a Jew’ to be a ‘friend of Israel,’ our British Jews actually want a ‘Goy’ to dwell at 10 Downing Street. How strange? Or is it…

A few analysts have tried this week to grasp this peculiar Jewish collective attitude. They wondered why are British Jews so opposed to the first Jewish candidate with a realistic chance of becoming the country’s leader?

Haaretz’ writer Anshel Pfeffer suggested that “the most obvious reason being given to this question is that while Cameron is widely regarded as ‘the most pro-Israel prime minister in British history,’ Miliband is considered indifferent at best and by many as downright hostile to the Jewish state.”

However, Pfeffer suggested correctly that Miliband is far from being an enemy of Israel. As we read above, Miliband is a staunch supporter of The Jewish State. “He [Milliband] has repeatedly said he is committed to Israel’s right to exist in security and strenuously voiced opposition to any form of anti-Israel boycott.”

Pfeffer is kind enough to provide us with a further insight into Jewish identity, psychic, and ideological attitude. “Historically, the majority of British Jews supported Labour because they saw the left wing as staunch opponents of any form of racism, of which they were so often the targets. In the last quarter of the 20th century, as they became better integrated and wealthier, they began drifting towards the Conservatives, particularly when Margaret Thatcher, who represented the north London Finchley constituency, became party leader.”

What Pfeffer is saying is pretty simple. In the old days, Jews supported Labour not because they were ‘anti racist,’ but just because they didn’t like being persecuted as Jews. But as they moved up the ladder, they actually decided to support the party that is committed to big money and the fight against Anti Semitism. With 80% of our Conservatives MPs being CFI members (Conservative Friends of Israel), the Tory party provides all Jewish needs – it is good for business but it is also united against one kind of racism, namely ‘Anti Semitism.’

Pfeffer correctly states that “the last three prime ministers, all proud Christians, have all felt very much at home with the Jewish community. Miliband came over at best as a polite but awkward stranger.” By now this is easy to explain.  The majority of British Jews prefer a ‘Sabbos Goy’ to run the country on their behalf; a politician that can be pushed and squeezed, a person that would take the country to the next Zionist global conflict without raising too many questions. A person that would support Israel when support is requested by The Lobby, a PM that would react to the imaginary fear of Anti Semitism even before the Jews themselves would sense such a fear. Only a dedicated Sabbos Goy can provide the goods. But Miliband will not be able to satisfy any of these demands. For the Jews, his Jewishness is clearly an obstacle. It only means that he will work hard to convey an image of impartiality and reason and, as we know, these two do not agree with Zion.

This Jewish attitude is far from being new, it is in fact as old as the Jews themselves. The Book Of Esther teaches Jews how to manipulate, mobilize and interfere with their rulers rather than becoming the rulers themselves. British Jews need a leader who easily succumb to their lobby pressure. They suspect that Ed may be more resistant than any other candidate and truth must be told, they may as well be correct.