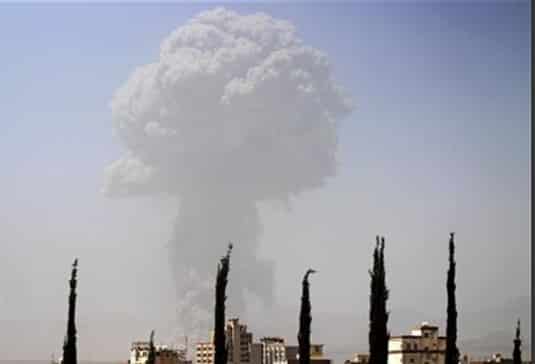 [ Note: The base of this pillar looks to be about a half kilometer wide.]

Only a week after Veterans Today exposed Germany’s deal to trade submarines for Israeli nuclear weapons and the related transaction, tactical nukes for Saudi Arabia as well, Saudi Arabia may well have used one of these weapons in Yemen. The International Atomic Energy Agency (IAEA) has documented nearly 50 clandestine nuclear explosions since 1945.

In lieu of soil samples and closer photographic evidence of the blast site, and based on the cover story, a “scud missile site” being used, the initial assumption that this is a nuclear explosion is not out of line.

You see, Scud B missiles, such as those Yemen acquired with the help of the Bush family, from North Korea in 2002 use unsymmetrical dimethylhydrazine (UDMH) as fuel:

Unsymmetrical dimethylhydrazine (UDMH) (1,1-dimethylhydrazine) is a chemical compound with the formula H2NN(CH3)2. It is a colourless liquid, with a sharp, fishy, ammoniacal smell typical for organic amines. Samples turn yellowish on exposure to air and absorb oxygen and carbon dioxide. It mixes completely with water, ethanol, and kerosene. In concentration between 2.5% and 95% in air, its vapors are flammable. It is not sensitive to shock. Symmetrical dimethylhydrazine (CH3NHNH(CH3)) is also known but is not as useful.[3]

The initial explosion from the Saudi weapon and the billowing pristine white cloud afterward are indicative of a lie, you see Scud fuel burns yellow and brown, the vapor trails on launch unwholesome and ugly.

A 2002 article by Peter Symonds

In the midst of Washington’s efforts to ratchet up its “weapons of mass destruction” rhetoric and establish a pretext for war against Iraq, a peculiar episode took place this week in the Arabian Sea.

On Monday, two Spanish warships, which form part of a US-led anti-terrorist naval task force, intercepted in international waters a North Korean freighter, the So San, heading towards the Middle East. According to Spanish and US officials, the ship, which was about 1,000km from the Horn of Africa, was unflagged, its identification markings had been painted over and it failed to stop when challenged.

The Spanish frigate Navarra fired three bursts of warning shots at the vessel. Snipers shot out cables crisscrossing the deck, enabling a helicopter to hover and land a boarding party of armed marines who seized the ship. A search uncovered 15 medium-range Scud missiles packed under bags of cement, along with conventional high explosive warheads and drums of fuel.

The Spanish were ordered directly by President George W. Bush to “stand down” and allow the delivery of the North Korean Scud missiles, brokered by Prescott Bush and Company, his uncle.

Before that happened, Vice President Cheney went to Bush, advising him to try to spin the event as a provable WMD provocation by Saddam.  However, Yemen, who had placed the order for the missiles nearly two years before, demanded delivery and the White House had to scramble to cover its lies to the press.

In any case, the Saudi’s did not hit Scud missiles.  The explosions are “primary” only with no secondaries, which at a missile facility would have been several, fueled missiles, fuel storage facilities, fuel trucks and warheads, popping off for some time, each leaving a telltale plume of nasty looking smoke as complex petrochemical tend to do.

With control of the press and easy availability of low to moderate output tactical nuclear weapons, some with obscure and nearly non-existent radiation signatures,

Gordon:  If Germany and Japan have covert nuclear weapons programs, what is the IAEA’s secret list, you know, other than Israel? What nations were sold stolen nuclear pits taken from the Pantex facility?
Jeff Smith:  Most likely there are several other countries that are involved in this nuclear conspiracy including the Ukraine, Koreas N and S, Taiwan, India, Brazil, Argentina, South Africa, Saudi, ETC. It starts to put the context on the stolen US nuclear pits and just how big the operation was or is and why they took out Roland Carnaby in Houston. Israel is the open back door (the elephant in the room) to getting around IAEA NNP. They bribe everybody with small tactical nukes to keep them in line and vote against the Palestinians.
Gordon:  You say Israel uses tactical nukes as party favors? Who are their stooges in Washington, not just congress, but those involved directly in the theft of nuclear weapons?J

Jeff Smith:  This is why they will never sign the NNP treaty or ever allow inspection. Richardson’s role at DOE under Clinton is now becoming more interesting. Along with Tom Countryman’s head of NNP at State. This explains why the FBI watched him so closely.

Mushroom clouds rise in the sky in western Sanaa where the capital’s largest weapons caches are located. 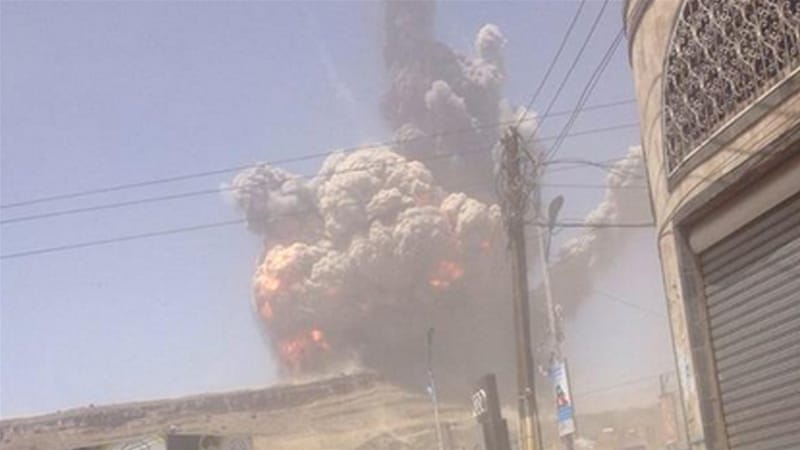 Mushroom clouds on Monday rose in the sky over Fag Atan, in western Sanaa, where the capital’s largest weapons caches are located.

The air strike was reportedly targeting a Scud missile base held by the Shia Houthi rebels in Fag Atan mountain. Nearby homes were being evacuated. 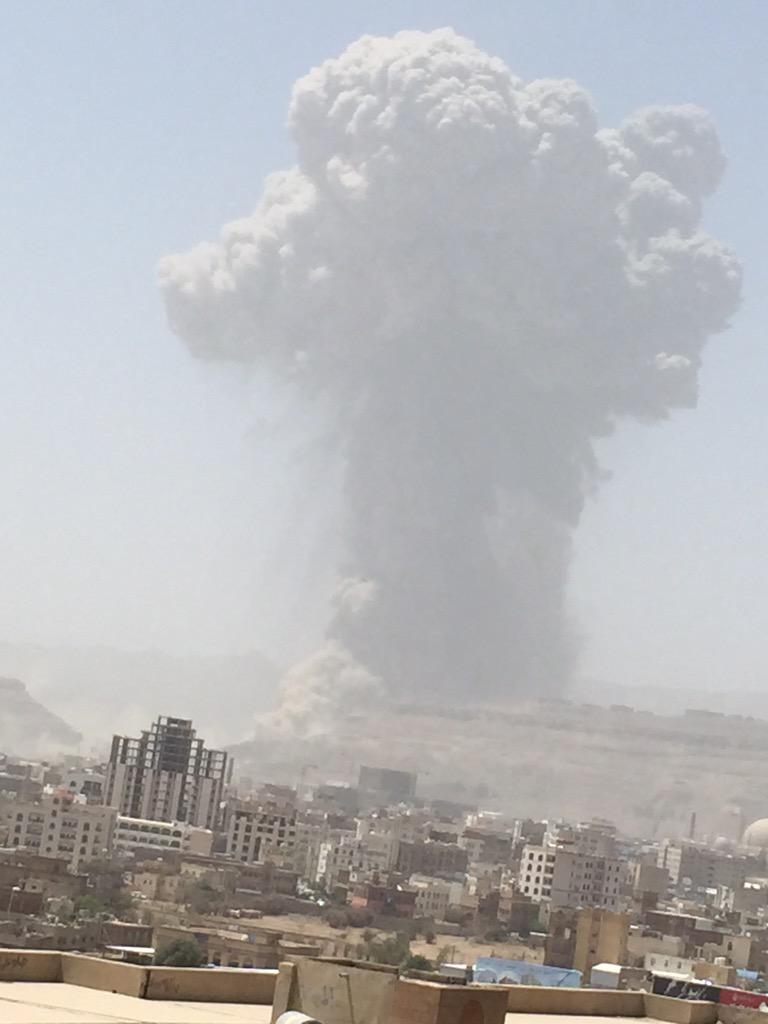 Hakim al-Masmari, the editor-in-chief of Yemen Post, told Al Jazeera that the weapons depot in Fag Atan was not hit.

“We sent reporters to the scene who confirmed that the strike missed the depot. The impact site was far away from it,” he said.

Residents of Sanaa said the explosions sent large shockwaves through the city.

“The hanging ceiling and chandelier fell because of the explosions,” resident Mohammed Mohsen told the Associated Press.

In a separate development, Riad Yassin, Yemen’s foreign minister said thousands of Houthis and fighters loyal to the former president have been killed since the operation started.

Saudi Arabia and allied countries began the air campaign on March 26, hoping to roll back the Houthi fighters who seized Sanaa in September and have overrun large parts of the country.

Riyadh says air strikes will continue until President Abd-Rabbu Mansour Hadi, who has fled the country, is reinstated.