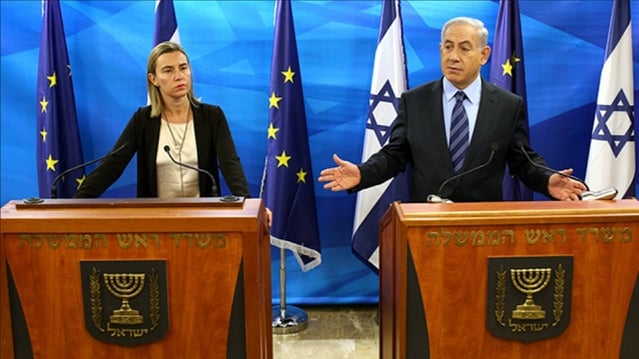 In a letter calling on EU foreign affairs chief Federica Mogherini to promote and implement a 2012 plan to mark produce and products for the European market place from the Israeli occupied West Bank, 16 EU foreign ministers stated that what they are requesting is “an important step in the full implementation of EU longstanding policy in relation to the preservation of the two-state solution.”

If that’s what they truly believe, the 16 who signed the letter – they included the foreign ministers of Britain and France but not Germany – are clearly out of touch with reality because the two-state solution has long been dead, killed by Israel’s on-going colonization and ethnic cleansing by stealth.

There are, of course, two other possible explanations.

One is that those who signed the letter (as well as their EU ministerial colleagues who didn’t) are entertaining the hope that the Palestine Authority can be bullied and bribed into accepting a two-state solution on Israel’s terms – terms which would leave Israel in occupation of large chunks of the West Bank and the Palestinian “state” little more than a collection of disconnected Bantustans, with Israel’s various security services still in overall control.

The other possibility is that those who signed the letter (as well as their EU ministerial colleagues who didn’t) know that the two-state solution is dead but must go on pretending it isn’t because the only alternative if there is ever to be justice for the Palestinians is one state with equal political and human rights of every kind for all. And that is something European governments do not want to think about. Why?
If Zionism does not resort to a final ethnic cleansing, the day is coming when the Arabs of what is today Greater Israel will outnumber the Jews, so one state for all would lead in time to the de-Zionization of it.

The end of the Zionist enterprise. That being so the obvious implication is that getting to the point where a one state solution might be possible would require the EU to play its necessary part in putting Israel on notice that unless it ends its defiance of international law and becomes serious about peace on terms the Palestinians could accept, it will be isolated and subjected to sanctions of the kind that played a major role in pushing South Africa’s apartheid regime to its end.

In my analysis there is one main reason why European leaders do not want to think about that option. They are frightened, perhaps terrified is a more appropriate term, of being falsely accused of anti-Semitism by Zionism’s sickenly self-righteous and deluded leaders who never miss an opportunity to play their Nazi holocaust blackmail card.

They seized the opportunity to play that card again in response to the letter signed by the 16 European foreign ministers, and the first to do so was Avigdor Liberman, still the Zionist state’s foreign minister while Prime Minister Netanyahu struggles to complete the business of cobbling together a coalition government.

Evoking the memory of the Nazi holocaust Liberman said this:

“I have a suggestion for them on how to label, They can label all products from Judea, Samaria and the Golan Heights with a yellow star. I think that is extremely fitting to the cynical and hypocritical position expressed in this letter.” (The yellow star of Nazi Germany was a patch Jews were ordered to sew on their outer garments to mark them out for persecution).

Translated Liberman’s message was to the effect that if European leaders go ahead with the plan to label Israeli produce and products from the occupied West Bank they will be regarded as the new Nazis and proof of the truth of what Zionist propaganda has always asserted – that the world has always hated Jews and always will. (This assertion is nonsense of the most diabolical kind but Zionism’ s success in promoting it is the reason why most Israeli Jews and very many Jews of the world have closed minds and are beyond reason on the matter of justice for the Palestinians).

It seems to me that if the EU is to have a role in seeking to advance a real peace process, it must begin by issuing what could be called a policy guidelines indicator statement. It would say in the most explicit terms that criticism of, and opposition to, Israel’s occupation and on-going colonization of the West Bank is NOT a manifestation of anti-Semitism and is a proper response to Israel’s defiance of international law and denial of justice for the Palestinians.

And such a statement could add that the prime cause of the rising, global tide of anti-Israelism and the creeping transformation of it into anti-Semitism is the Zionist state’s policies and actions.

However diplomatically it was worded the underlying message of such a policy guidelines indicator statement would be that EU governments were no longer going to allow themselves to be blackmailed by the playing of the Nazi holocaust card into supporting Israel right or wrong.
That’s what is needed if the EU is to come to grips with reality on the ground in Israel-Palestine and play its necessary role in stopping the countdown to catastrophe for all.