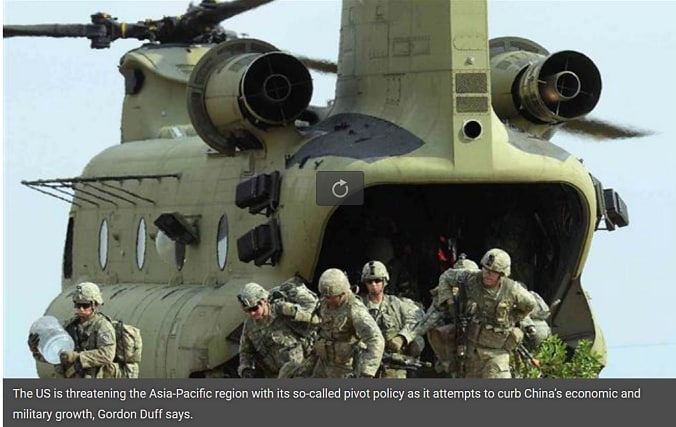 The United States is threatening the Asia-Pacific region with its so-called pivot policy as it attempts to curb China’s economic and military growth, an intelligence specialist in Ohio says.

“We’re obviously trying to block China,” said Gordon Duff, who is also a military veteran and a senior editor at Veterans Today.

“The United States has decided that it wants to bully its way across the Pacific Ocean and dominate the Far East,” Duff told Press TV on Thursday. The US “wants to strangle the Chinese economy,” he said.

Duff made the comments as more than 11,000 soldiers from the United States and Philippines launched one of their largest annual combat exercises Monday amid growing tensions in the Asia-Pacific region over China’s efforts to claim territory in the South China Sea.

The Philippines is seeking more US military and diplomatic support to curb China’s increasing efforts to establish sovereignty in disputed areas in the South China Sea as well as the East China Sea.

China criticized the massive military exercise on Tuesday. China’s state-run Global Times said in an editorial that the war games run counter to efforts to ease territorial tensions in the South China Sea.

“The thunder of guns made by Washington and Manila there is inappropriate and of little use.”

China has repeatedly accused Washington of meddling in the regional issues and deliberately stirring up tensions in the South China Sea.