Home Government What prevents Russia, US from fighting against Islamic State together? 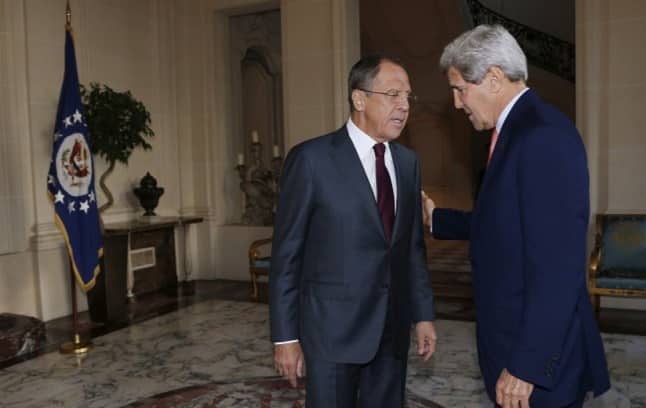 MOSCOW, April 23. /TASS/. Russia’s arch foe these days is the Islamic State. Washington claims that the worst threat to world peace is what it invariably refers to as Russia’s ‘aggression’ in Europe and operations by terrorists in Syria and the United States itself. Both countries have had and still have different priorities all along, Russian experts say. As for the struggle against radical Islamism, the United States’ attitude has always been rather dubious.

Russia’s main enemy today is the Islamic State, Russian Foreign Minister Sergey Lavrov said in an interview broadcast live on three major radio stations on Wednesday. “They said that it is not a separate organization but the very same Al-Qaeda,” Lavrov said, adding that Al-Qaeda was a brainchild of the United States.

US refusing to admit Islamic State result of its actions — Lavrov

As he addressed the 69TH UN General Assembly session on September 24, 2014, US President Barack Obama said the worst threats to peace were the Ebola virus disease, Russia’s ‘aggression’ in Europe and terrorists in Syria and Iraq.

“The Americans wish to be global leaders, and this explains everything they have been doing,” the president of the Centre for Current Politics, Sergey Mikheyev, has told TASS. “Everybody else is regarded by them as a competitor. They just don’t feel they need any cooperation with others. Russia’s attitude is fundamentally different: it does not want to influence the rest of the world. It just safeguards its interest. Russia would like to have an equitable, partnership-like dialogue, while the US tends to see us as potential vassals.”

As far as the Islamic State is concerned, Mikheyev feels very strong doubts the United States really wants to struggle against it in earnest. “There have been suspicions that the United States played a role in its emergence and even supports it in sense. Had it really wished to do something about it, the US would have long done so.”

A lecturer at the Russian presidential academy RANEPA, Kira Sazonova, points to another obvious spiral of geopolitical, strategic and military confrontation between Russia and the United States. “It is quite indicative that neither the departure from the socialist ideology in the 1990s, nor the resetting of relations in the 2000s have lifted the fundamental contradictions between the ways the two countries see the modern world order.”

The gist of their controversies is clear, Sazonova says.

“Russia proceeds from the supremacy of international law and the principle of the non-use of force in international relations, while the United States firstly presses for world domination and the elimination of all those who may dare disagree with this strategy, and secondly, argues that its national interests and laws enjoy priority over the existing international law,” she believes.

Sazonova recalls that the Islamic factor has traditionally evoked a great deal of controversy in world politics. The United States’ role in the Middle East is quite ambiguous.

“On the one hand, it is the United States that keeps drawing the greatest attention to that region in the context of struggle with international terrorism, in particular, in the wake of 9/11. On the other, the United States played a major role in creating Al-Qaeda and in financing radical groups in Libya, Syria, Yemen and Afghanistan, which would eventually form the backbone of the Islamic State. That’s an open secret. It is this duplicity of Washington’s policies that impairs constructive cooperation in resistance to the IS,” she said.

TASS may not share the opinions of its contributors