Home World How on earth do they survive in that ‘hell called Gaza’? 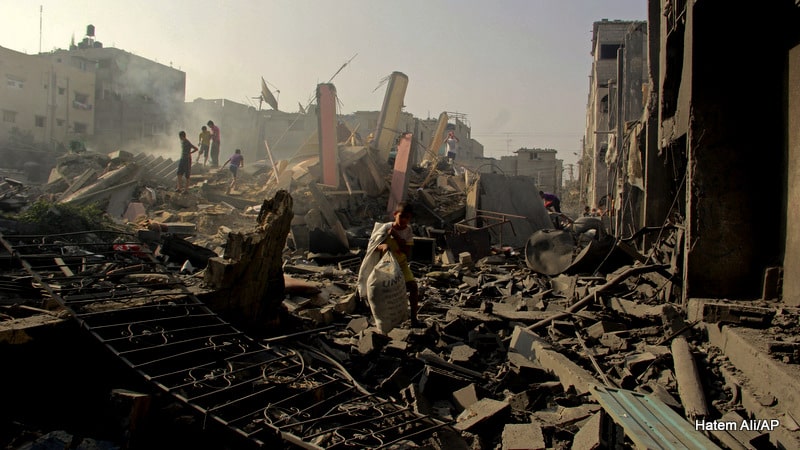 Nearly every Palestinian I have met over the years has urged me to tell their story when I get home. Some have written to me with very moving accounts of life and hardship under Israel’s brutal occupation, confirming the appalling truths I’ve seen for myself.

A wife and mother of three in Gaza – let’s call her Amal (means ‘hope’) – recently contacted me to strike up a conversation. She has a university degree and her English is good. Palestinians, especially the ladies, are very keen on education and do their utmost to get the best they can. Her last message, sent in two parts owing to a power cut, is something I’d like to share with readers because it describes so powerfully this little family’s situation in the aftermath of Israel’s genocidal assaults and overwhelmed by death, destruction, grief and chronic deprivation.

I had asked how her children were making out at school knowing that the education system is under impossible pressure and working shifts…..

“Few minutes to have electricity cut. Let me tell you that my kids are in the 4th & 3rd primary grades and the youngest goes to KG [?kindergarten]. They go to UNRWA schools as we are originally refugees. They receive education of quite good quality. But schools works in 2 or 3 shifts a day especially in areas where displaced people of the last war still shelter in UNRWA schools; they don’t have any other place to go.

“My husband is a policemen since 1998 and now he don’t work but receive salary from PA [Palestinian Authority] in the West Bank as well as thousands of employees who stay at home after 2007 internal conflict. Employees of Gaza government [Hamas] work but they didn’t receive salaries for more than a year. It’s strange.

“Hamas has its recent financial crisis after Al-Sisi became president in Egypt and destroyed all tunnels where they used to bring monetary. Also it’s external relationships are not as before especially with Iran due to Hamas not supporting Al-Asaad in his civil war. Also Qatar seems not trusting anymore and it’s new prince decrease the fund.

“It is common here for people to talk discuss and analyse the political issues; that why I talk freely somewhat. When I have other free times I talk about football and I support Barcelona in its coming match with Bayern Munich huhh.

“Anyway; the causes of Hamas financial crisis are not very clear but its impact is clear. Hamas impose further taxes on the basic needs. A recent 10% increased to what they call luxuries which are meat, vegetables and fruits and other things. People are already suffering poverty and can’t manage to offer [?afford] life necessities. It’s catastrophic! Please Hamas solve your financial problems away.

“I know I disturb you with our situation. Maybe you like to know. If not please ignore my messages?

When I asked if I could print what she was saying she replied: “It’s very nice to have my words published. Somethings may need editing; it is scribble and I will enjoy learning.”

I haven’t edited any of it.

“I’m from that hell called Gaza. Extreme poverty, unemployment and insecurity destroy life and future of people who can hardly survive…. Migration is the dream of thousands youth here. But, it is very difficult to receive more refugees in the West especially with the Syrian crisis.

“Actually, I can’t leave Gaza in the current time. I maybe like to travel but it is not a life style in Gaza. The frequent close of borders and the poverty of people make it impossible. Travel cost lots of money. My sister seeks to leave Gaza anyway but in vain. It is difficult for us to live or to leave. Gaza, my beloved home, is like a curse. Those who live here has dead souls; and those who tried to escape from here, sank in the ocean?!”

On another occasion she wrote:

“The unemployment rates are horrible and the internal conflict and external siege leave catastrophic impacts. There is no certainty of reconstruction of Gaza so far and the situation goes to its worst. The trauma of the last war stays with us and it of course has dangerous effects upon the lives of children and their futures.

“Crisis is a common word in Gaza; you can find the crisis of construction materials, the crisis of power supply, the crisis of closing borders, the polluted water, the shortage of fuel, the poultry flu, the lack of medical supplies and drugs…etc. And between every crisis and another there is a war!!!

Let me tell you about power cut for example. Since 2006 the crisis started when Israel hit the only power plant in Gaza and it was rebuilt many years later. The problem now is in securing the fuel; there is a conflict between Gaza and West Bank governments about who should pay its price and taxes. I can describe a day without electricity when you stay doing nothing, looking at nothing for 8-16 hours a day, and sometimes for 20 hours a day. My son once asked me: Mom, Do any country in the world has a power supply all the time??? I had no answer actually. How do you think a generation used to living in darkness seek a bright future. Please don’t close your eyes and struggle with us to keep the light on!

“For all my life we just witnessed lots of suffering, hurt and distresses. We love PEACE and we just dream of leading a decent life!”

How can I reply to that? More to the point, what have those with the power to end the misery instantly – the political poseurs in Washington, London and the other capitals of the world – got to say?