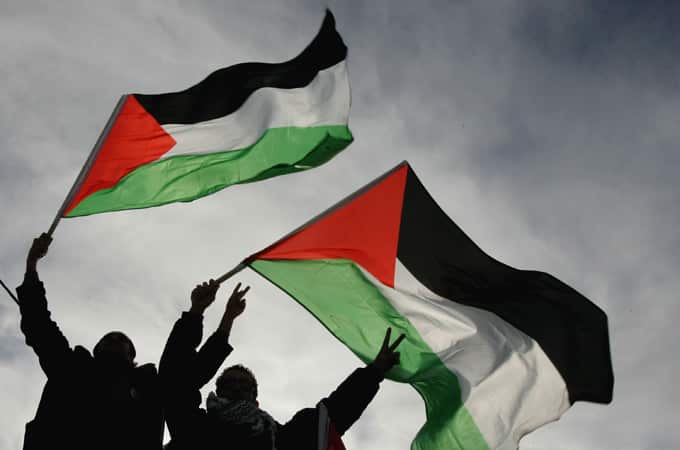 He starts by saying: “The Palestinian people’s struggle for freedom and national independence has reached a decisive moment. The two-state formula is under serious threat, due to systematic Israeli policies and practices that have seriously undermined the solution, threatening to make it impracticable in the very near future.”

Abbas reminds us that in 1988, Palestine unilaterally recognized Israel over 78 percent of historic Palestine, in addition to accepting United Nations resolutions as the framework for a peaceful solution to the conflict.

But, hepoints out, Israel responded to these painful Palestinian compromises by expanding illegal settlements on Palestinian territory and systematically violating international law. “Israel has committed these violations with impunity, encouraged by the reluctance of the international community to hold Israel accountable to the same standards of human rights and international law that all other states are obliged to follow.

“The Oslo Accords were based on the promise of a final status agreement after a five-year interim period. Today, 22 years after the Oslo Agreement, the Israeli occupation has turned into the effective annexation of our country”.

He rightly complains about Israel’s relentless collective punishment of the Palestinian people — namely the ongoing obstruction of free movement of persons and goods, the theft of their natural resources including water, and repeated withholding of their tax revenues. He says these acts “deconstruct the remarkable accomplishments Palestinians have achieved at the institutional and economic levels”. I’m not sure what he’s talking about there. But thanks for the history lesson, Mr Abbas. Such a pity you didn’t learn those lessons yourself before it was too late. Where do you go from here?

The Palestinian leadership, Abbas says, has an obligation to seek redress and justice through all available legitimate means. “We rely on international law and human rights instruments that were designed to resolve conflicts peacefully and prevent the indignities of war…. ” That is not really true. They haven’t pursued justice through international law up till now, almost as an after-thought, and that’s a large part of the present problem.

He claims the recent Israeli election made it clear that the regime’s intention is to block the establishment of a Palestinian state, entrench the occupation and deny Palestinian rights. Nothing new there — it’s been patently obvious for years.

And, of course, there is no forgetting the Nakba (catastrophe), which saw the erasure of 418 Palestinian villages and the forced displacement of 70 percent of the Palestinian people to make way for the creation of Israel, a cruel process that continues to this day.

Perhaps the most important thing Abbas says in his statement — and it’s worth emphasising here — is this: “All states have a standing legal and moral obligation to uphold and protect the principles of international law and human rights. We ask the international community to support our right to self-determination by recognizing the State of Palestine on the land Israel occupied in 1967.”

He wants everyone’s support for the Palestinians’ accession to the Rome Statute and the International Criminal Court and for the Arab Peace Initiative, which he says is “the most generous regional peace plan we could ever have”.

Finally he urges us to recognize the State of Palestine and support its efforts to achieve peace based on justice and mutual respect. “It is time,” he insists.

Well, it is long past time.

Too far ‘behind the curve’

Mahmoud Abbas’s term as President officially ended more than 6 years ago. The Basic Law allowed him an extension of one year but he still clings to power with scant legitimacy. Too many people see past his charade. He now appears to them as the king with no clothes and, in the words of the Danny Kaye song, “altogether as naked as the day that he was born”.

The trouble with Abbas is that he travels a long way ‘behind the curve’. The Israelis’ determination to make their occupation permanent was clear long ago. Illegal settlement building under the Allon Plan, effectively annexing Palestinian territory, began in 1967 and their dash to create as many irreversible “facts on the ground” as possible has been staring us in the face for decades.

Abbas claims to be one of the architects of the Oslo Interim Agreement, which was supposed to ensure a start to negotiations on the permanent status by May 1996, leading to the implementation of Security Council Resolutions 242 and 338 and the settling all main issues. Has it really taken him 19 years to see that it was going nowhere?

Meanwhile he has repeatedly given the Israelis more time to cement their ill-gotten gains. He readily settled for bogus negotiations arranged by dishonest brokers and employing a useless negotiating team. And he inexplicably dragged his feet over joining the International Criminal Court. Had he acted promptly the horrific slaughter of last summer in Gaza would probably have been avoided.

During his over-long tenure Abbas has failed to unite the Palestinians under a single purposeful voice and mission. He has driven the factions further apart by letting rip the old Fatah-Hamas rivalry. His Fatah delegation to Gaza for a week of unity talks with Hamas scampered home on Day One with no explanation to the public.

His regime fails to keep the world informed or make proper use of media opportunities and behaves as if gagged. He is not noted for tactical brilliance and his embassies in the West are lazy, uncommunicative and uncooperative towards journalists and writers. The Palestinian Authority under his command stands accused of collaborating with Israel in its programme of violent oppression.

In the final analysis Abbas and his cronies are habitual losers and a crippling millstone around to the necks of ordinary Palestinians. They won’t be fondly remembered except by the usual suspects.

Will corruption report nail down his coffin?

http://www.al-monitor.com/pulse/originals/2015/05/palestine-gaza-legislative-council-court-isis-aman-paac.html A report by The Coalition for Accountability and Integrity (AMAN) titled “Absolute Power, Total Corruption” is a real shocker. AMAN was established by a number of Palestinian civil society organizations to combat corruption and enhance integrity, transparency and accountability in Palestinian society.

According to its Commissioner-General, Azmi Shuaibi, “the cancellation of elections and the absence of the Legislative Council led to the president’s monopolizing the three powers — legislative, judicial, executive — which has served as fertile soil for some cases of corruption.”

The report discloses, for example, that certain non-ministerial government institutions are still outside the scope of official accountability and have awarded salaries and privileges to officials that are inconsistent with the financial realities of PNA (Palestinian National Authority). Some receive a salary exceeded $10,000 per month. – See more at: http://www.aman-palestine.org/en/activities/2374.html#sthash.33BIPKhg.dpuf

states, among other things, that “studies conducted by AMAN along with local and international public opinion polls confirmed that corruption is still one of the most significant problems, concerns, and challenges in Palestine. Alongside this is the deterioration of economic conditions and problems related to governance issues.

“The Israeli occupation, the political division and internal differences continued to negatively impact anti-corruption efforts. The most prominent of these problems is Israel’s continued refusal to present transparent financial data on the money it collects on behalf of the PNA (taxes and customs). Furthermore, in 2014 the role of the occupation became apparent in protecting certain people charged with corruption. In addition, the negative effects of the internal division continued whereby some official decisions were made in the West Bank and Gaza Strip for factional purposes, which had a financial impact on public funds.

The policy of making political appointment has led to “random and unnecessary” jobs for the boys and “takes up approximately 60% of the overall operational budget of the PNA each year. In a number of ministries, it reaches 85% of the overall operational expenditures. This is without calculating in Gaza Strip employees who received their salaries from the Hamas-led government. This resulted in the PNA’s inability to meet its obligations towards basic public services such as health, education and welfare.”

Abbas is the darling of the West and of Israel, a trusted stooge and dogsbody. Hamas is usually blamed for any corruption. But if this catalogue of maladministration, malfeasance and worse doesn’t hammer the final nail in Abbas’s political coffin, I don’t know what will.