Home Health Over 3,000 Complaints Tied to This Brand of Dog Food 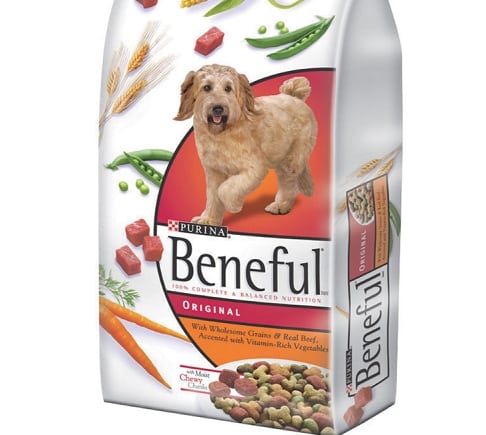 Many of you may be aware that in early February, a pet owner, Frank Lucido, filed a lawsuit in California federal court against the Nestlé Purina PetCare Company. Lucido charged that Purina’s Beneful brand dry dog food sickened two of his dogs and caused the death of a third.

According to the court filing:

“Mr. Lucido brings this Class Action on behalf of all persons who purchased Beneful brand dog food in the four years prior to the filing of this complaint and whose dogs became ill or died as a result of eating Beneful. Beneful contains substances that are toxic to animals and that have resulted in the serious illness and death of thousands of dogs.”1

The Lucido family included three dogs, a 4-year-old German Shepherd, an 8-year-old English Bulldog, and an 11-year-old Labrador Retriever. In late December or early January of this year, Lucido began feeding all three dogs Beneful exclusively. Since the Lucido home was undergoing renovations, the three dogs were staying in three different houses. This information is important because the only thing the three dogs had in common during the timeframe in question was the food they were eating.

By the end of January, all three dogs were ill and tragically, the English Bulldog was found dead in the backyard on January 23rd. A post-mortem exam showed signs of internal bleeding in his stomach and lesions on his liver. The German Shepherd, who became very ill a week before the Bulldog’s death, had similar symptoms and signs of internal bleeding and liver disease. According to the lawsuit, the symptoms were “consistent with poisoning.”

The Lab became ill shortly after the Bulldog’s death, and as of the lawsuit filing date of February 5th, both surviving dogs were still under veterinary care.

Lawsuit Notes Use of Propylene Glycol in All Beneful Formulas, As Well As Contamination by Mycotoxins

According to Lucido’s lawsuit, there are over 3,000 online consumer complaints made by owners of sick or dead dogs that were fed Beneful kibble. The symptoms most consistently mentioned were vomiting, diarrhea, weight loss, internal bleeding in the stomach, and a problem with or failure of the liver. You can read a sampling of the complaints in the court filing.

The lawsuit blames toxins in Beneful as potentially harmful ingredients in the food. It asserts that propylene glycol is a component of antifreeze that is a known animal toxin,2 and the substance is high on the ingredient list in every formulation of Beneful. The FDA has actually banned the use of propylene glycol in cat food, and Purina is aware of this as a manufacturer of cat foods.

Mycotoxins have also been found in Beneful according to tests conducted by the Association for Truth in Pet Food.3 Mycotoxins are produced by a fungus that develops on grain products, which are a main ingredient in Beneful. According to the lawsuit, pet owner complaints about Beneful describe symptoms consistent with mycotoxin poisoning.

‘When There’s Been a Crescendo of Complaints, You Have to Pay Attention’

Those are the words of Lucido’s attorney, Jeffrey Cereghino, in explaining why he took the case.

Purina’s response is both predictable and patronizing:

“Like other pet foods, Beneful is occasionally the subject of social media-driven misinformation. Online postings often contain false, unsupported, and misleading allegations that cause undue concern and confusion for our Beneful customers.”4

The company contends the Lucido lawsuit is baseless. According to a statement in response to the suit, Purina said, “Beneful had two previous class action suits filed in recent years with similar baseless allegations, and both were dismissed by the courts.”

So the Lucido lawsuit is number three filed against Beneful recently, and Purina would have us believe there’s not a shred of truth in thousands of complaints about their product.

US Senate Asks FDA to Investigate

Recently, two US senators weighed in, asking the FDA to open an investigation into the allegations against Beneful.

“Media reports have referenced more than 3,000 complaints online about dogs becoming ill or dying after eating Beneful. To our knowledge, the FDA has not issued any investigations, warnings, consumer guidance, or product recalls to address these alarming issues.”5

The letter requests updates to the FDA’s implementation of a 2007 law designed to help prevent contaminated pet food from reaching animals. Among other things, the 2007 law requires the FDA to insure that pet food manufacturers report to the agency within 24 hours of discovering they have a contaminated product in their supply chain.

I haven’t been able to find an FDA response to the senators, or an FDA statement or public release of any kind regarding the complaints and lawsuits against Beneful.

Interestingly (or infuriatingly, depending on your point of view), the FDA had time to jump all over a single consumer complaint about a Primal Pet Foods product. Primal produces raw pet food, as you might know or might have guessed. The FDA’s quick action to investigate this single consumer complaint resulted in a voluntary recall of a single lot of a Primal raw frozen formula for a low thiamine level.

“FOR IMMEDIATE RELEASE – March 13, 2015 – Primal Pet Foods is voluntarily recalling a single batch production code of Feline Turkey Raw Frozen Formula 3-pound bag. FDA tested product in response to a single consumer complaint. Primal Pet Foods was alerted by FDA that the testing of two bags of this lot resulted in a low thiamine level. Neither FDA nor Primal have received any other reports concerning Thiamine in Primal products. No other product manufactured by Primal Pet Foods is involved in this voluntary recall.6”

As we learned from the Chinese chicken jerky treat disaster, most large pet food manufacturers have no interest in pulling problem products off store shelves  unless or until they hear from the FDA. For its part, the FDA has been consistently reluctant to take a hard line with pet food producers the size of Purina.

It’s important to realize that your pet’s first line of defense in avoiding tainted food is you. Depending on pet food companies and government regulators to have your dog’s or cat’s best interests at heart is very risky.

To report an adverse event associated with pet food, you can submit a report to the FDA here. My first recommendation, if you’re worried about contaminated commercial pet food (and what concerned pet parent isn’t, at this point?), is to prepare pet meals yourself in your own kitchen with ingredients you select (and based on balanced, species-appropriate recipes).