Home Life Victim’s widow: “I want the truth about the Charlie Hebdo attack!”

[Author’s note: I will be speaking on the Charlie Hebdo affair – and showing evidence against the official version – next week in Ann Arbor, Detroit, London, and Toronto, and later in the summer in the San Francisco Bay Area, Seattle, and Atlanta. Details here.]

Maryse Wolinski, widow of slain Charlie Hebdo cartoonist Georges Wolinski, has gone public with her doubts about the official version of the killing of her husband, who was widely considered the most talented and accomplished (and least obnoxious) of the magazine’s contributors.

In an interview with the French newspaper Le Dauphine, Maryse Wolinski was quoted as citing numerous discrepancies in the official story and saying: “I want to know the truth about the attacks.”

Maryse Wolinski told interviewer Yoann Gavoille that she has no fear of Muslim extremists, but that:

“… flaws in the Charlie Hebdo security system led to the tragedy of January 7th. By the way, I have been conducting my own personal investigation because I think that there are gray areas in the (official) account of the facts. The attack occurred on a day when almost everyone gathered in the editor’s office. That’s something that never happens. But there they were. They had planned to share a galette des rois (a French cake traditionally shared to celebrate Epiphany). And ‘coincidentally’ the attack took place that Wednesday. It’s highly suspicious.  Also, I noticed many inconsistencies between the measures directed by police headquarters, and the actual protection measures in Charlie Hebdo.  I would also like to know why the death certificate of my husband was signed at 11:30 while the Kouachi brothers arrived at Charlie Hebdo at 11:33. I have many questions to ask the investigating judge in the context of my unofficial investigation.”

Maryse Wolinksi’s “unofficial investigation” recalls that of the Jersey Girls, the 9/11 widows who held George W. Bush’s feet to the fire in the aftermath of the September 11th, 2001 stealth coup d’état.

In the Le Dauphine interview, Maryse Wolinksi expressed grief and anger, as well as a determination to pursue the truth. Should anything happen to her, God forbid, the French people would have yet another indication that elements of their own intelligence services, in collaboration with Israeli intelligence, orchestrated the Charlie Hebdo and Kosher Deli shootings. (Police investigator Helric Fredou was “suicided” for pursuing the truth about Charlie Hebdo; Jean Marie Le Pen, founder of the National Front party, had his house set on fire and was beaten up just one week after he accused French intelligence of orchestrating the Charlie Hebdo events; and investigative journalist Hicham Hamza was hospitalized with a possible case of poisoning after breaking several stories pointing toward the Charlie Hebdo affair being a joint DCCI-Mossad operation.)

Georges Wolinski, Maryse’s late husband, was a giant of French cartooning whose work spanned several decades. In the wake of the neocon-Zionist takeover of Charlie Hebdo, and the magazine’s conversion into a pornographic-satanic Islam-bashing set-up for the coming false flag, Wolinski resisted neocon pressure and refused to draw pornographic attacks on sacred symbols and personages.

As philosopher Alain Soral wrote in his contribution to We Are Not Charlie Hebdo: Free Thinkers Question the French 9/11: 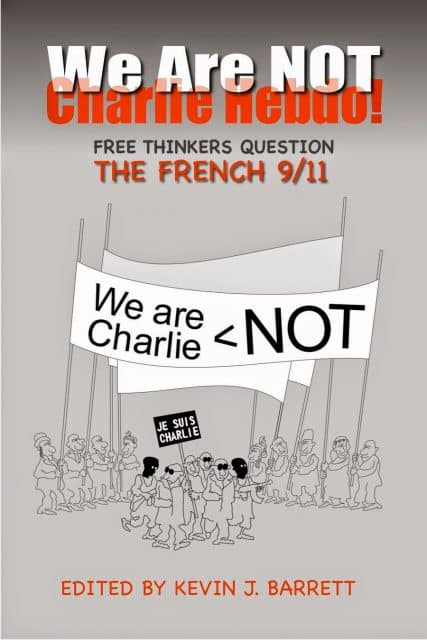 “Nonetheless, although Charb (the neocon editor) was an enemy to me, a bad guy for whom I had no respect, I obviously regret his death. Even more do I regret the deaths of Wolinski and Cabu, because they represented the old guard. Even if they had become slightly senile and a little bit lame, they had a long trajectory and real talent. Yet I must point out that had they been honest – had they been truthful enough to admit that the Charlie Hebdo for which they worked had betrayed the Charlie Hebdo for which they engaged in their youth – they would not have been present at the fateful meeting. Their biggest mistake was to sanction by their talent, and their long history, the garbage purveyed by Charb and Philippe Val. Sadly, they paid with their lives.”

Will Maryse Wolinski, Hicham Hamza, and other honest French investigators manage to fully expose the Charlie Hebdo false flag and force the prosecution of the guilty parties? As with 9/11, public exposure of the horrible truth would trigger the biggest scandal in national history…and strike a huge blow against the psychopathic Operation Gladio crime lords who rule the West through Orwellian deception.