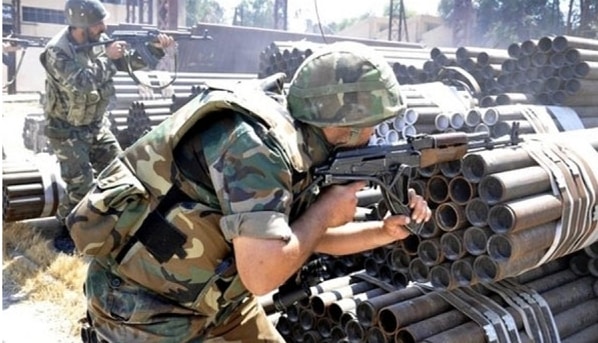 TEHRAN (FNA)- The Syrian army thwarted a massive raid by ISIL on the city of Hasaka on Sunday.

The ISIL terrorists were pushed back from their positions in Hasaka by the army units before they could do their bombing plot that included blasting five bomb-laden vehicles in different parts of the city, military forces told FNA.

The ISIL had tried to launch a similar attack on the Hasaka city three weeks ago, but it was also thwarted by the army.

Earlier today, the military sources said that the Syrian Army had identified and targeted a long convoy of ISIL’s vehicles in Hasaka province.

The sources said that the army attacked the ISIL militants’ supply line in the nearby areas of al-Dawoudiyeh village in the Southeast of Hasaka and destroyed all vehicles of the convoy.

On Thursday, Kurdish People’s Protection Units (YPG) in Syria’s Kurdistan region seized back over 220 villages and towns from the ISIL militants in Hasaka province.

The YPG forces purged ISIL terrorists from the town of al-Mabroukeh in Hasaka bringing the total number of captured villages and towns to 221 in the Northeastern province.

Mabroukeh is only 20 kilometers from the town of Ras al-Ain and the Kurdish fighters announced that over 50 ISIL terrorists were killed in the 15-day-long military operations in the Hasaka province.