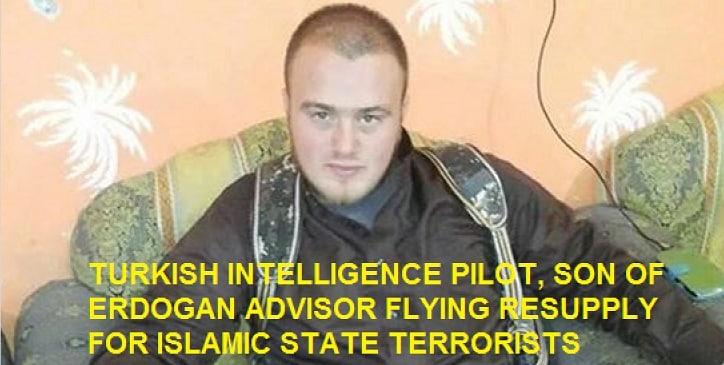 Today, a State Department a “Twitter” account has accused Syria in using air strikes to support ISIS moves against other “rebel” groups around Aleppo.  Over 200,000 Syrians have been killed by ISIS during the nearly 4 year old conflict including 35,000 Syrian military, who have died fighting primarily ISIS and Al Nusra forces.

But there are other important stories the Western press won’t be carrying, those outlining resupply of ISIS by Turkey and the US.  Our first look at this will be with the story of the son of a high ranking Erdogan advisor, a Captain in Turkish intelligence, a pilot name Majeed Kamal.  Last week Kamal was with Al Nusra in Aleppo, today he is in Raqaa with ISIS.  This is his photograph, exclusive to VT from intelligence sources on the ground inside Syria:

Captain Majeed Kamal regularly drops what he is told is medical equipment into Syria.  However, what he drops is military equipment, rockets, mortar rounds and ammunition, as his real job is flying logistical resupply for ISIS units operating against Syrian and Kurdish forces.  The photo below is of Captain Majeed Kamal with an Al Nusra intelligence officer.

The bizarre claim, officially credited by Reuters to the US government, reveals more than simply a willingness to put forward bizarre conspiracy theories as official US policy.  We have to take note that it isn’t just the missing WMD’s from the 2003 invasion that have plagued America’s credibility prior to this last “whopper” but there are also the dozens of underground cities that Secretary of Defense Donald Rumsfeld cited in a Tim Russert interview as well.

Both Rumsfeld and Russert asserted that hundreds of thousands of Afghan fighters with vehicles and armor were lurking in underground bases not unlike those many in the US now believe are beneath Walmart stores.

Then again, there is something far more sinister here than a simple lapse of sanity.  Whoever is responsible for this “tweet” has revealed the depth and nature of American surveillance capabilities in Syria and Iraq.   There are up to two dozen separate groups, some with a dozen members or fewer, fighting against the Damascus government in the region.

Many if not all of those groups, according to recent reports including threats made against journalists by Turkey’s strongman dictator, Erdogan, are receiving direct support from the Turkish army and Turkish intelligence.  Turkish officers have been captured inside Syria and Turkish military have been killed in fighting outside Aleppo and their bodies recovered by Damascus based forces.

If the US is aware of the position of the rebel groups, in a battle where there are no discernible lines, then the US has intelligence assets “on the ground” with the rebels, that assumption is not a bizarre claim.

A ranking Iraqi security officer tells a very interesting story.  He says that the US has, on two occasions, offered direct air support for Iraqi army operations.  Each time ISIS was waiting with an ambush and the US was nowhere to be seen.  This is a direct VT source at the highest levels in Baghdad.

Further, the US would also be aware of the level of illegal support from their NATO partner, Turkey, in support of Al Qaeda and ISIS forces, not just near Aleppo but further west at Kobani and against the Kurdish region of Iraq.

One of the most difficult things for an intelligence operation to accomplish is to discern the positions of units that are continually mobile in a war where there are no clear “fronts.”  This is done through air surveillance and signals intelligence primarily but in these circumstances, even that wouldn’t be enough.

Though Reuters, in their article, quote sources with terrorist groups including Al Qaeda and their “mouthpiece,” Syrian Observatory of Human Rights, a joint CIA/Al Qaeda propaganda organization funded by Radio Liberty, led by, among others, Donald Rumsfeld.

The same funding sources for groups cited by Reuters also are responsible for reporting on the situation in the Ukraine as well, bizarre fantasies of aid convoys from Russia laden with poison gas and endless Russian invasions that never materialize.

What is perhaps more frightening is the tacit admission by the US, albeit inadvertent, that surveillance capabilities throughout the region are capable of tracking even small units. 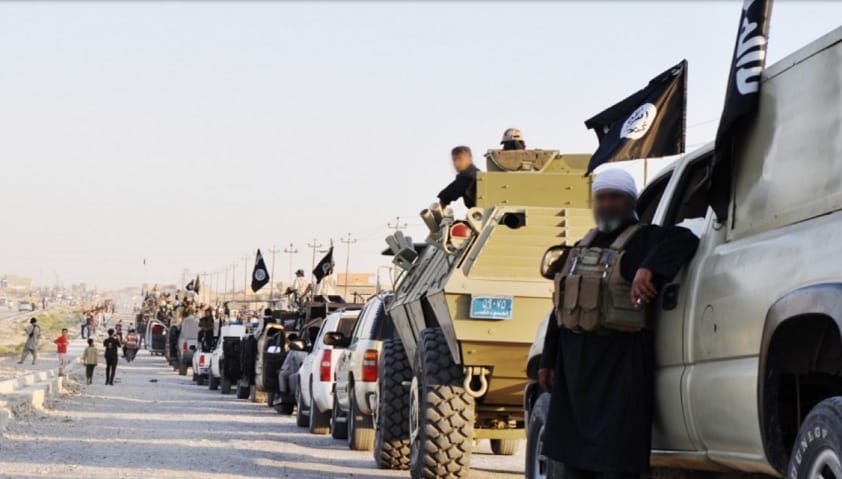 With flocks of drones, constellations of spy satellites and the world’s largest air force at their disposal, the US has failed miserably in aiding an ally, Iraq, against ISIS units that move in daylight, at brigade strength, with lines of vehicles that stretch to the horizon.

With full “air supremacy” over the entire Middle East, with AWACs (command and control aircraft with advanced radar) on station 24/7, ISIS is still receiving air supply drops, once claimed to be accidental or “conspiracy theories from Iran” as a US Army spokesman recently stated.  Now that some of these drops have been recovered by the Bagdad government, the Saudi Arabian origin of much of what is dropped is as clear as the stencils on the boxes.

Then again, the US has recently “discovered” that ISIS now has 2300 Humvee vehicles, captured from Iraqi forces.  The Humvee runs on diesel fuel.  There is little or no diesel production in areas of Syria and Iraq held by ISIS.

Those limited capabilities were said to be among the first targets of the US air war over a year ago, yet ISIS gets fuel from somewhere. American intelligence and surveillance capabilities claim to “know nothing.”  Is that credible?

During the recent ISIS conquest of Ramadi, the US pressured the Baghdad government to hold back Shiite (most Iraqis are Shiites) militias and allow ISIS to take the city.  The militias were held without transportation only 30 miles from the front, units with a strong history of winning fights.  While all this was going on, air supply drops were spotted at least 3 times and the lines of vehicles moving openly through the day in support of ISIS numbered in the hundreds.

All of this happened with American pilots watching, pilots who now claim they weren’t allowed to attack ISIS units as “permission was withheld.”

What is America’s game?