Home Life What is a “State of Emergency”?

LOS ANGELES – On January 3rd, Rafer Johnson — the legendary Olympic Decathlon Champion and iconic leader of major Civil and Human Rights issues over the past 60 years — spoke before the Los Angeles Neighborhood Council Coalition (LANCC) and declared: “I believe everyone involved in ending the homelessness of our veterans should have been and certainly by now should be acting in a state of emergency …. there is a state of emergency here in Los Angles and the time to act is now!”

This prompted the leaders of LANCC — representing 96 Neighborhood Councils — to present a Motion that was unanimously approved, declaring: “LANCC recognizes Los Angeles to be in a “state of emergency” for homeless Veterans and hereby requests that the Los Angeles City Council direct the City of Los Angeles with all of its resources and the Veterans Administration to unify and open a large-scale Crisis Humanitarian Relief Project on this land to immediately house and care for thousands upon thousands of disabled homeless Veterans.”

During the recent February 10th Hearing by the Subcommittee on Oversight & Investigations, House Committee on Veterans’ Affairs regarding the mismanagement and misappropriation of land at the Los Angeles VA, Skye McDougall, Acting Network Director of the Veterans Integrated Service Network and Janet P. Murphy, Acting Deputy Under Secretary for Health for Operations and Management, were asked by Committee Member U.S. Representative Jackie Walorski about Los Angeles being in a “state of emergency” for homeless Veterans, and they essentially scoffed at the question and weaseled around and said they’d consider this in the so-called Master Plan due October 15, which was eight months away at that time ….. now four months away – underscoring VA’s unilateral opinion that there’s no “state of emergency” for homeless Veterans in Los Angeles.

On February 19, Dick Southern, Region 9 Director for Vietnam Veterans of America (VVA9), sent a letter to the VA requesting a ten-month license agreement to Host a crisis homeless-Veteran shelter program on VA grounds for the benefit of disabled and homeless veterans. For the record, nearly half (47%) of all homeless Veterans today served during the Vietnam War era and there are more homeless Veterans nationwide now than were killed during the War that ended 40 years ago.

Three months later, the VA finally got around to responding to Mr. Southern’s request by rejecting it and then stating they were looking into different options, none of which were emergency oriented.

So, in the VA’s collective mentality, exactly what is a “state of emergency”?

First and foremost, it cannot be Veteran centric.

To the contrary, it must be for the sole benefit of non-Veteran entities by satisfying their urgent and unilateral want and covetousness of Veterans property at the largest VA in the nation situated in our nation’s capital for homeless Veterans.

A typical example for a VA “state of emergency” was to unconditionally accommodate the LA Marathon by running more than 25,000 participants through the Los Angeles VA and the subsequent public trashing of these sacred grounds while 20,000 war-injured and impoverished Veterans remain exiled and forced to live homeless and hungry in deplorable and inhumane conditions.

Another “state of emergency” that meets VA criteria is the urgent necessity to store nearly one hundred brand new Mazda cars on VA property for the sole benefit of “Mazda of Santa Monica”, at the expense of untold disabled and destitute Veterans who are living in their cars, campers and vans throughout Los Angeles.

The most current VA “state of emergency” is to facilitate the annual AIDS Bicycle fundraiser held on the Veterans Grand Lawn – the same place where VVA9 requested to Host a long-term crisis homeless-Veteran shelter program in accordance with the LANCC “state of emergency,” but were rejected.

And true to the VA’s predictable response for this non-Veteran “state of emergency,” they are totally devoted to facilitating a non-stop operation with massive tractor equipment that the U.S. Army Corps of Engineers would envy as the VA is re-grading and re-landscaping the Grand Lawn, including non-stop watering to make sure that Veterans land is lush and green for the benefit of 5,000 public attendees this Saturday, June 6, the revered anniversary date of the Invasion of Normandy during World War II. 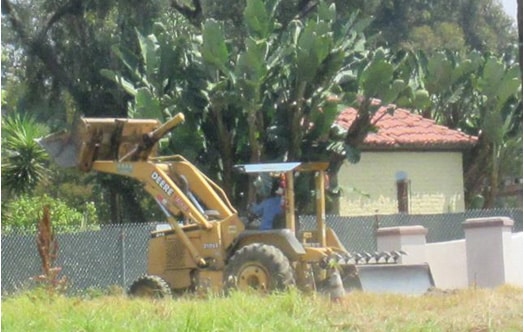 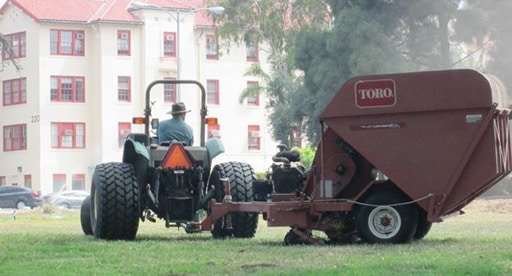 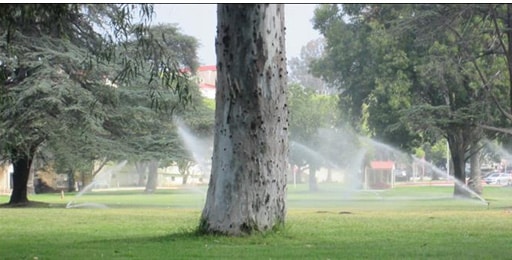 Emergency grading, landscaping and non-stop watering to beautify the Grand Lawn
for 5,000 attendees at Saturday’s event, which is not “Veteran centric” by any stretch

And, oh by the way, on June 4th, VA Secretary Bob McDonald will be at the Los Angeles VA to “unlock the front gates” two days in advance of Saturday’s fiasco as a friendly gesture that the public will always be welcomed on the sacred grounds of the Los Angeles National Veterans Home.

Did I mention there’s a unanimous public outcry that Los Angeles is in a “state of emergency” for homeless Veterans?

Would somebody please inform “Big Mac” about this fact on Thursday – 9:00 AM — at his personal gate-opening photo-op at the Veterans Revolution Plaza where the Old Veterans Guard has been protesting for seven years – 376 consecutive Sundays — to “Save Our Veterans Land” and “Bring Our Homeless Veterans HOME?”