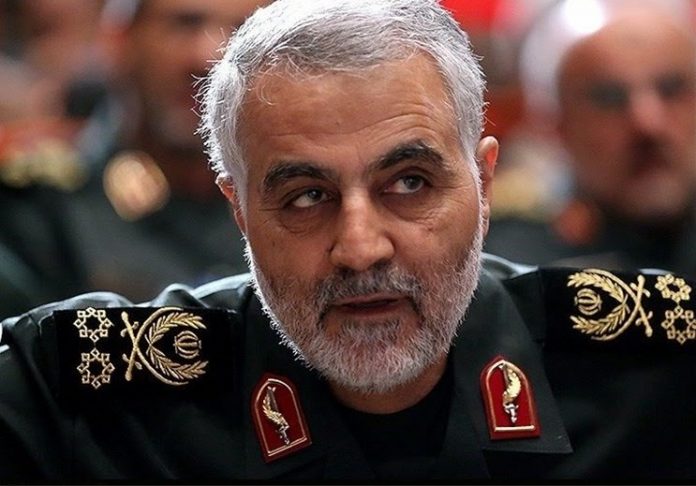 If you don’t know who General Giap was, Americans know him well.  General Giap died at 102 years old in 2013.  He crushed the Japanese, the French and then the Americans.  General Suleimani is his “apprentice.”

Iran has announced it is sending special operation commando units to Syria to be used in a combat role against all organizations warring on the Damascus government.  By organizations, we may well be referring to governments as well as terrorist groups, “freedom fighters” and, if we are honest, mercenaries and adventurers.

This information is from the highest levels of the Syrian and Iranian governments directly to Veterans Today.  There will be no other announcements.  This was the public announcement today in Tehran, one too many failed to take seriously:

TEHRAN (FNA) – Iranian President Hassan Rouhani in a meeting with Syrian Parliament Speaker Mohammad Jihad al-Laham stressed that Tehran will never leave Damascus alone and will continue its all-out aid and assistance to the nation.
“The Iranian government and nation will remain beside the Syrian government and nation to the end,” Rouhani said in the meeting in Tehran on Tuesday.

He also underlined the necessity for strengthening and expanding relations between the two countries, and said, “We are sure that enemy states will fail to impose their conditions on the Syrian nation.”

Emphasizing the terrorists’ failure in bringing the Syrian nation down to its knees, Rouhani said, “Unfortunately, certain regional states have done wrong calculations and think that the terrorists are always a tool in their hands to reach their goals, but they (the terrorists) will backfire (on their supporters) sooner or later.”

The Wars Enter A New Stage

Syria, Iraq and Iran have been pushed together by their common shared view of the circumstances of what is now a budding world war.  President Rouhani mirrors the words of his fellow leaders in both Iraq and Syria in his assessment of nation state “hooliganism” as the primary contributing factor to what will certainly be more than a decade of war.

At the end of the decade, it is likely that Syria, Iraq and Iran will survive, economically aligned to the European Union, China and Russia while others, Saudi Arabia in particular, are not going to be with us.

In a statement earlier today, General Petraeus, the disgraced former CIA chief, pointed out that recent failures by the Iraqi army are not endemic but can be quickly turned around.

If you believe both the mainstream press and not unreasonable allegations made with no shortage of evidence, the US is warring on ISIS and Al Nusra while training and arming their military and providing weapons and supplies to their forces across the Middle East.

Can all of this be true, contradictory though it sounds?  Yes is an answer, the only answer.  Why is it that no one understands President Obama?  Consider the following:

The “double dealing” of the United States is very much a part of what could be considered “endemic failure” in Iraq, a factor easily remedied by eliminating the cause.  From New Eastern Outlook in Moscow:

“A close look at the terror players in the world, Al Shabab, Boco Harum and ISIS, just to name a few of many, show the active hand of both colonial era and post-colonial era intelligence agencies, British, French, Turkish, Saudi and Israeli with Canada and Germany as well.

America is a different story. It isn’t that America isn’t involved but that much of the involvement is from the private sector, with Bush era military contractors tied to criminal consortiums like the massive world narcotics cartel, now functioning as nation states.

The terror organization, Al Nusra, is being trained and equipped to a large extent by drug cartels using CIA and US Department of State contracting firms to supply personnel and even weapons.”

Direct sources in both Syria and Iran would like this story to be simple but facts are never simple.  Over the past six months, VT and “affiliates” have developed strong relationships with both Syria and Iraq.  Several of us had worked in Iraq, myself with the UN, Alex Powers as assistant to Paul Bremmer and others with military special operations or as trainers.

VT affiliates ran counter-intelligence in Iran for the State Department as well.  It is reasonable to assume that we have a strong understanding of both sides and strong relationships because of our unique independence and political independence.

Syria has been both watchful and concerned, fighting now on six fronts, fighting not only terror groups but the Turkish Army, Saudi cash, Israeli artillery, intelligence and air support and the powerful Israel lobby not to mention America, playing both sides against the middle.

Both Russia and Iran should have vital national interests in Syria but support has been unclear, seemingly dependent on the whims of politics.  For Russia it is Ukraine and Crimea, for Iran the price of oil and the nuclear settlement.

Syria has, as many can guess, been very much “against it.”  Yes, there are the sycophants in Damascus, the dandies and favorites.  What few understand is the nature of Syria, a nation that well should have been close to the US were it not for carry-over policies from the Cold War.

Syria is close, a short flight from Europe, great beaches, skiing, good food, archeological treasures and a free and open society, or it was until it was targeted.

Yes, there has been legitimate opposition and a political system unable to offer full participation, almost exactly like the systems in the US and Great Britain where powerful special interests and secret societies run everything as political polls will support.

Syria has a professional army, one not destroyed by the US, not bombed out of existence, cleansed and sanitized by Bush religious fanaticism and corruption.  Rebuilding Iraq, removing the “Bush stench” will take some time.

Iran has 13 million men under arms, technically the largest army in the world, yet an army that has never, not until now, fought outside its own territory.  If only the United States could say that.

What we have learned is the limitations of air forces, of American “shock and awe,” on the cheap.  You see, America’s army is in decline, no new planes coming out, certainly not the F 35 “flying dump truck.”  America lacks the moral will to fight a good war after fighting so many bad ones.

Yemen is pulling Saudi Arabia apart.  Opposition to the Saudi regime is picking up steam.  No one will fight to defend a nation with no freedom, no opportunity, with nothing to offer its people but the chance to blindly obey or be chopped to pieces.

ISIS is very much a “Saudi thing,” it isn’t hard to see that.  Lots of head chopping by both of them, lots of hypocrisy, Koran in public and dirty sex behind closed doors, dirty sex powered by kidnapping and murder.

ISIS has been a good game but not one that will hold up without Turkey and Saudi Arabia and the smaller players, Jordan and Israel, several more as well, carrying the load.  Perhaps the cleansing will cross more borders than some suspect?

Iran says it is going in, warring on ISIS and “her sisters.”  The term used is “to the death.”  What Russia will do we don’t know but Putin will either weigh in or Russia will never be taken seriously again.  Putin carries as many questions as Obama.  Who is Putin?  Who are his masters?

We have seen the public statement.  We see this private one.  We will watch.  Will Iraq begin retaking Anbar?