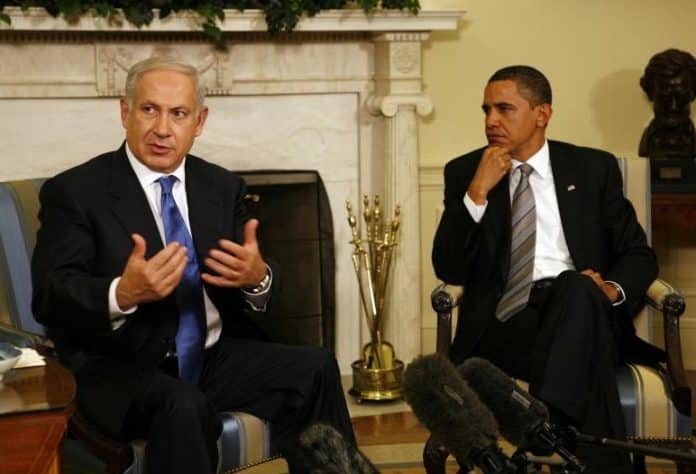 [ Editor’s Note:  Obama moves from the rope-a-dope tactics of taking all that Bibi can whip on him and not responding aggressively, by taking the initiative here.

He does not use the term “sabotaging the peace process”  or “we have no partner for peace”, but he says everything but this.

This was a diplomatic cruise missile. We will now see what the AIPAC Lobby people do to front for Bibi, or if they sit it out like many did during the Bibi crashing into Congress circus to get all the free press and put on a show for the folks back home.

I actually got a little pride back in my country reading his statements below, but the rubber will meet the road when the financial support lever is used. As long as  we keep shoveling out the dough, then Israeli politicians will compete do show they can get more out of the US suckers than their competition.

The public needs to take a lesson here from Obama, and don’t wait for Bibi to make the next insult to America, but to start demanding that US financial support be trimmed back to cause some pain for having the Israelis pay the freight for their hard assed attitude… Jim W. Dean ]

Israeli PM Benjamin Netanyahu’s inconsistent views on Palestine could cost Israel its world “credibility,” US President Barack Obama has warned. This is the latest jab at Netanyahu in the ongoing US-Israeli rift over Palestinian statehood.

“The danger here is that Israel as a whole loses credibility,” Obama told Israel’s Channel 2 in an interview on Tuesday. “Already the international community does not believe that Israel is serious about a two-state solution.”

Obama was responding to a question regarding Netanyahu’s contradictory comments made about the creation of a Palestinian state before and after the March’s general election.

For Obama, however, the sudden change of heart seemed “as if this is simply an effort to return to the previous status quo in which we talk about peace in the abstract, but it’s always tomorrow, it’s always later.” The US president, who assumed office the same year as the Israeli leader, in 2009, then described Netanyahu as “a politician, who’s concerned about keeping coalitions together and maintaining his office.”

Netanyahu’s statements following the election had “so many caveats, so many conditions, that it is not realistic to think that those conditions would be met any time in the near future,”

From Obama’s point of view, Netanyahu is someone who is driven by fear. He is “predisposed to think of security first. To think perhaps that peace is naive … To see the worst possibilities, as opposed to the best possibilities in Arab partners or Palestinian partners, and so I do think that right now, those politics, and those fears are driving the government’s response,” Obama said.

As for concrete steps toward solving the Israeli-Palestinian problem, Obama hinted it would be more “difficult” for the US to continue to veto UN resolutions criticizing Israel. This is because, with no prospect of peace in sight, “it becomes more difficult to argue with those who are concerned about settlement construction, those who are concerned about the current situation.”

For more than five decades, the Palestinians have been seeking full statehood recognition and independence from Israel. Meanwhile, Israeli governments have worked toward legitimizing settlements instead, which have grown in number and have been widely viewed as a violation of international law.

When answering a question about Iran, Obama defended the ongoing nuclear negotiations ahead of the June 30 deadline – in what has seemingly been another major split with Netanyahu.

“I’ve said that, in exchange for some modest relief in sanctions, that Iran is going to have to freeze its nuclear program, roll back on its stockpiles of very highly enriched uranium,” he said. “At that time, everybody said ‘This isn’t going to work! They’re going to cheat, they’re not going to abide by it.’ And yet, over a year and a half later, we know that they have abided by the letter of it.”

With the Israeli leader being a staunch opponent of any deal with Iran, the interview has been seen as an attempt by Obama to convince Israelis that he will not sign onto a bad deal, and that he “understands” their fears.