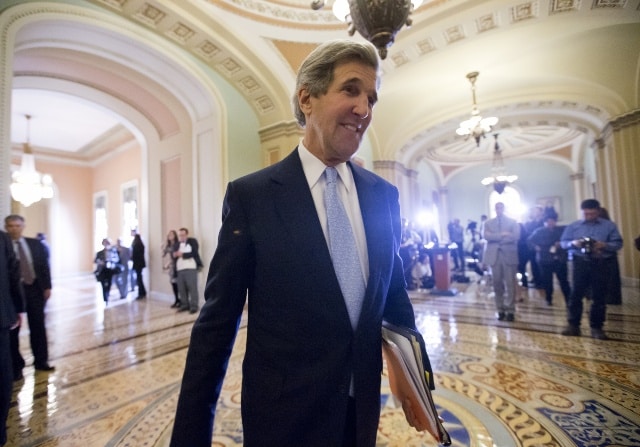 ‘Pariah’ No More: Washington Wants Moscow to Be Cooperative Partner

[ Editor’s Note: No, VT is not cited below, but we have editorialized on what a brain dead operation this Ukraine regime change was — criminal in its intent and knowing that lots of innocent people were going to be killed by the West, and deploying its growing bullpen of terrorist assets as casually as ordering a Dominos Pizza.

This public warming up to Russia could be a contrived feint, or just a slap down to Kiev for some of the stupid things said, like Poroshenko claiming to want to retake the Donetsk airport. Having said that, the US and EU have a long record of silence on most of Kiev’s war crimes. A leopard does not change its spots.

As the US finally shifted away from the bogus Iran nuclear program hoax, for reasons still not completely clear, we suspect the motive involves a desire to focus more military assets, especially navy, to its Asia Pivot.

The US Navy would not last a day in the Black Sea in a shooting war. The electronics would be killed, as Russia demonstrated last year, and the ships would be quietly sunk. Obama has stated that the US has no military option for Ukraine or Crimea; the unsaid is that using the Kiev military as cannon fodder would be acceptable and affordable.

Prof. Stephen F. Cohen covers virtually all of VT’s positions below on the Western debacle in Ukraine. But he can get mass media coverage, while our phone never rings, not even from Democracy Now. This is not whining on our part. We accept being outsiders, as that gives us access to places and people where Cohen cannot go… Jim W. Dean ]

Stephen Frand Cohen (born November 25, 1938) is an American scholar of Russian studies at Princeton University and New York University. His academic work concentrates on modern Russian history since the Bolshevik Revolution and the country’s relationship with the United States.

John Kerry’s recent visit to Sochi has clearly indicated that the White House policy towards Russia during the last year has failed, prompting an apparent shift from confrontation to competition and cooperation, Stephen Cohen noted.

US President Obama’s policy aimed at isolating Russia and bringing the Kremlin to its knees has obviously failed, stressed Stephen Cohen, a prominent American historian and professor of Russian studies at Princeton University and New York University.

He  added that US Secretary of State John Kerry’s visit to Sochi has become a “turning point” in the saga of the Ukrainian crisis.

“The White House policy towards Russia during the last year has failed. What was that policy? We don’t have to guess. President Obama told us on several occasions that the policy was to isolate Russia and bring its leadership and the person of Putin to his knees through economic sanctions and to thereby make the concessions that the United States and NATO wanted in Ukraine,” Stephen Cohen emphasized.

That has not happened, the historian underscored, adding that some would even argue that the opposite has happened and Russia in various ways has become stronger.

Vladimir Putin’s decision to meet Kerry after his negotiations with Russia’s Foreign Minister Sergei Lavrov was a “very big symbolic diplomatic deal” that could be considered as a possible thaw in the new Cold War.

“What’s the new American policy? And clearly it involves in fundamental ways Russia’s cooperation… Now it appears that we [the United States] don’t want [Russia] to be a pariah. We want it to come back and be a cooperative partner with us, certainly in Iran, certainly in regard to Syria, but the pivot now is of course in the Ukrainian crisis,” the scholar underscored.

According to the historian there is a certain split over the Ukrainian issue among the US political establishment. Washington has found itself unable to control the Ukrainian government that it has been supporting since the February coup of 2014.

On the other hand Kiev has done many things in recent months that do not improve the White House’s position in this crisis, Professor Cohen stressed.

Kiev as made a lot of provocative statements about its intentions to retake Crimea and Donbass by the military force, evidently ignoring the Minsk II agreement’s provisions.

And it has become clear that Washington’s patience is not limitless when John Kerry publicly castigated the Ukrainian government in Sochi, saying that President Petro Poroshenko should act in accordance with the Minsk II accord.

“It was the first time a high American official in public has reproached the behavior of the Kiev government. So I ask myself does this signify that the Obama administration is now diminishing its previously unqualified support for Kiev. If that is so, that is as bigger turning point as Kerry’s visit to Sochi,” Stephen Cohen emphasized.

However, the historian warned about probable backlash against US-Russia consensus from the US’ “party of war” – the American “hawks.” Stephen Cohen noted that all these “fabulous tales” about Russia’s aggression against Kiev, its intentions to recreate the USSR and invade the Baltic states are strikingly similar to extravagant myths that former Iraqi leader Saddam had weapons of mass destruction (WMD).

Still, it is very important that US Army War College has recently defined the future of US-Russian relations as “not confrontation, but competition and cooperation.” Although this formula is echoing the US strategy towards the USSR during the Cold War, it still marks a possible shift in relationship between Washington and Moscow, according to the scholar.