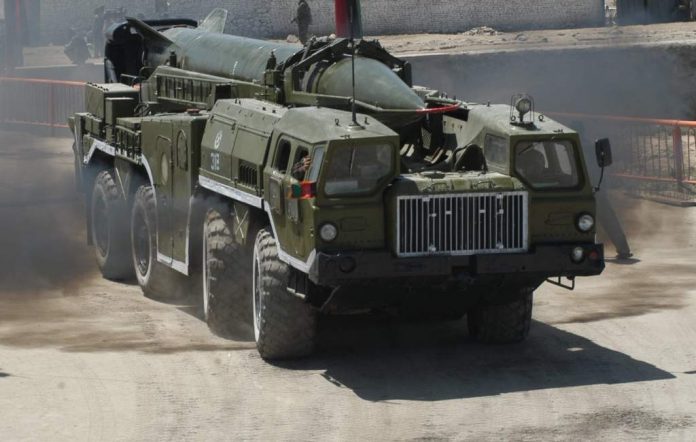 [ Editor’s Note:  The damage here is not strategic in a military sense, but could be so from a psychological perspective. After being pummeled by airstrikes for weeks, including nuclear weapons being used on them, the Yemenis are showing they can counterattack.

Refugee Prime Minister Mr. Hadi had recently undermined the UN talks by basically saying his only involvement would be working out the details of his being restored to power and new elections being held. He obviously is living in an alternative universe, and making a fool out of Mr. Moon at the UN could have some long term consequences for Mr. Hadi.

The Yemenis will need Saudi support in terms of strengthening the opposition in SA to be more outspoken and condemning the war as a misadventure that is backfiring. You will notice that all reporting about the new Arab NATO has gone completely silent.

While the VT reporting of Israeli planes with SA markings field testing some nuclear bunker busters went all over the Arab Press, the Western media had a complete black out, as usual. But the paradigm has changed because of this huge blunder.

Anyone and everyone will be looking to make or buy these weapons, which do not need sophisticated nuclear warhead material, as not only a deterrent, but one which would be used offensively. Countries in the region are not going accept their being designated as testing grounds. The UN and IAEA, by hiding this story, have marginalized themselves even more so now as being very selective in their non-proliferation concerns… Jim W. Dean ]

TEHRAN (FNA) – Saudis, including Royal family members, are in a rush to flee the country after Yemen’s first Scud missile hit a military airbase in Saudi Arabia’s South on Saturday, media reports said.

“The Saudi residents of Khamees al-Mushait are waiting in a several-kilometer-long trail of cars to flee after their city was hit by Yemeni Scud missiles,” the Arabic-language Sa’ada Press news website reported.

The Riyadh-based Ahrar al-Hejaz news website also reported that many Saudi princes have fled to western countries, specially France and Britain, after consecutive defeats of King Salman’s army and plots, adding that some other princes are running away in anticipation of trial and punishment due to their opposition to the king’s war on Yemen.

Earlier today, a high-ranking Yemeni official underlined that firing missiles by Yemen into Saudi Arabia meant to give a warning to the Riyadh government to stop its continued attacks against the neighboring country.

“The goal of targeting Saudi Arabia with Scud missiles was to warn Riyadh and we hope that it has grasped the meaning,” Al-Mayadeen TV quoted the senior official, who asked to remain anonymous, as saying on Sunday.

According to media reports, the missile was fired early Saturday morning at the Saudi regime’s largest air force base located in the city of Khamees al-Mushait in the kingdom’s Southwest. Saudi Arabia claimed that it had intercepted the Scud by two Patriot missiles. But Al-Mayadeen said the missile hit an air base. Airport terminals of Jizan and Abha were evacuated and flights cancelled following the attack.

Also on Saturday, the Yemeni forces fired at least 80 missiles against the Saudi army’s positions in Jizan region. There are still no reports on the extent of the Saudi casualties in the border areas. The attack came after Saudi warplanes pounded the areas of Bani Sayah and Sahar in Sa’ada province and claimed the lives of more than 70 civilians.

The Yemeni sources confirmed that the missiles fired by the popular forces against the Saudi targets inflicted substantial losses on an arms depot and four military patrol vehicles, killing several Saudi forces.
The missile attacks which were carried out in Towailaq district in the Saudi border region of Jizan was revealed by a military source to Yemen’s SABA news agency during an interview.

“A large number of Saudi military aggression forces were killed in the attacks,” the source, who asked to remain unnamed, said. Saudi Arabia has been bombing Yemen in the last 74 days to bring its ally, fugitive president Mansour Hadi, back to power.