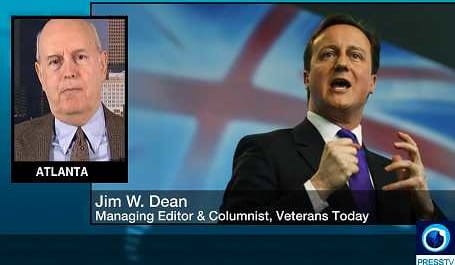 [ Note:  This story is a few days old, but still funny! That David Cameron, or any British politician would lead a real anti-corruption campaign is stand up comedy of the highest order. The staff people who dreamed this one up should be shot.

You just can’t make this stuff up! I can’t wait until Cameron announces that all British politicians, celebrities and media people will be taking monthly child molesting lie detector tests to protect Britain’s young.

The City of London is such a financial pirate haven it got itself a “semi-country” status as a firewall on interference with its long time wheeling and dealing. But as long as the public keeps swallowing the baloney, our plantation overseers will keep serving it to us.]

British Prime Minister David Cameron has said that he wants the FIFA bribery affair to act as a catalyst in order to weed out widespread corruption.

Cameron will address the G7 summit on Sunday and is putting the FIFA bribery storm firmly at the heart of his agenda.

He claims that he wants to use the scandal, which has resulted in the resignation of FIFA chief Sepp Blatter, to spur on action against institutional corruption.

Cameron will say, “The body governing football has faced appalling allegations that suggests it is absolutely riddled with corruption. And Blatter’s resignation this week presents an opportunity to clean up the game we love. It is also an opportunity to learn a broader lesson about tackling corruption”.

Cameron’s call for international action will, however, come amid reports of misuse of UK’s foreign aid. There have been growing concerns that large portions of Britain’s £12billion of foreign aid misused by corrupt politicians and criminals.

“Cameron represents a country where money laundering and scam sare rampant. Cameron is trying to get on the world’s stage although Britain is a small country with its economy completely stagnant. It’s the time for people to start thinking about whether a country like Britain deserves the attention that it is spading on the world stage”, Jim W. Dean Managing Editor & Columnist, Veterans Today  told Press TV.

The 79-year-old Sepp Blatter re-elected to a fifth term last Friday, two days after Swiss police arrested seven FIFA officials, including two vice-presidents, at a Zurich hotel. FIFA is also under scrutiny over the awarding of the 2018 World Cup to Russia and the 2022 event to the tiny Persian Gulf state.

The arrests were launched on behalf of U-S prosecutors who accuse the seven, and eight other suspects, of involvement in $150 million of bribes. The U-S move, however, drew angry reactions from both Blatter and the Russian president.

Many people have also questioned as why the US are playing a major role in the crackdown on Blatter and FIFA. US authorities have already charged fourteen people over alleged corruption at the world’s football governing body.

“Everyone knows that these are going on for a while and it’s very unusual that what the United States brought was clearly a politically motivated case. Some western countries are trying to exploit FIFA for their own political proposes and now they are trying to make it institutional exploitation”, Dean said.

The FIFA issue has also been getting hotter, day by day, in Britain. This week, Cultural Secretary, John Whittingdale expressed his readiness to host 2022 World Cup if the world’s football governing body, FIFA, takes the venue away from Qatar. He also called for major change within FIFA.

Another vocal supporter of widespread reform of FIFA and one of the firmest critics of Blatter is English FA chairman Greg Dyke. He said, “The great danger now is you get Blatter Mark II. It needs a root-and-branch change of the structure of the organization. Blatter won’t lead that reform, he can’t do it.”

David Cameron has put corruption at the top of the agenda for Sunday’s G7 meeting. Angela Merkel has made it clear that climate change and sustainable development are the top priorities she will be pushing for. But Cameron is set to hammer home this issue of corruption, believing that,