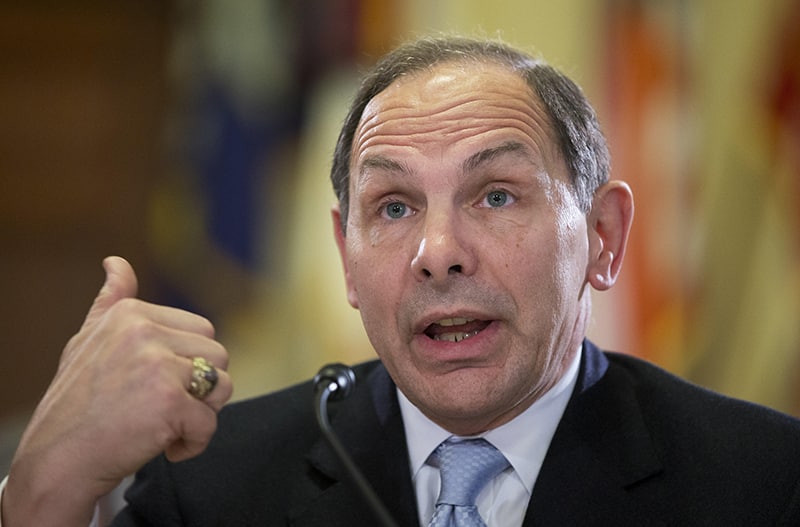 LOS ANGELES – June 15th marked the 800th Anniversary of the Magna Carta Libertatum, which is purported to be the foundation for our own U.S. Constitution that promised us a Free Republic.

Tragically, there’s nothing to celebrate as we now live under oppressive dictatorial rule, and one needs to look no further than the deceptive heavy-hand of Robert A. McDonald who operates under the ruse of being a Congressionally-approved Secretary of the Department of Veterans Affairs (VA), when he’s really a self-appointed dictator.

After a long-sought and hard-fought victory for disabled and homeless Veterans, a Federal Judgment was entered via a landmark ACLU lawsuit. But instead of honoring the Judgment, VA attorneys and the Department of Justice U.S. attorneys appealed the Federal Court ruling, even though it was deemed “morally and legally indefensible” by some of our nation’s top legal scholars.

Operating unilaterally and in absolute defiance of the Federal Court-Ordered Judgment of nine VA real estate deals that were adjudicated “unauthorized by law and therefore void” ….. dictator-in-chief McDonald subverted the rule of law to protect his wealthy friends who illegally control vast holdings of Federal VA property at the expense of homeless Veterans.

With his unilateral mission of putting Military Veterans last and personal friends first, dictator McDonald contacted two “personal friends” – Ron Olson and Bobby Shriver — both wealthy attorneys and neither are Veterans. Together, they held meetings in secrecy behind closed doors to “settle” the Federal Judgment by agreeing to vacate it and the ACLU lawsuit in their entirety, as though they never existed.

President John F. Kennedy forewarned: “The very word “secrecy” is repugnant in a free and open society; and we are as a people inherently and historically opposed to secret societies, to secret oaths and secret proceedings.”

During the secret “settlement agreement” meetings, dictator McDonald manipulated a deceptive “exit strategy” that proved to be contrary of what he promised, because now there’s a fast-moving “entry strategy” that allows more non-Veteran operatives to occupy VA property while disabled homeless Veterans are denied emergency housing and care on these same grounds.

Los Angeles remains our nation’s capital for homeless Veterans with no relief in sight, even though dictator McDonald brought in his own “homeless expert” from afar. The expert vehemently denies that LA is in a “state of emergency” for homeless Veterans, even though 96 LA neighborhood Community Councils unanimously passed a Motion declaring it is. Even worse, dictator’s expert believes that homeless Veterans are better off sleeping behind dumpsters in back alley-squalor than in tents and pre-fab shelter on VA property.

King McDonald recently held a “private ceremony” with a few of his personal friends and fellow VA bureaucrats to open the front gates of the Los Angeles VA to the general public, instead of building emergency housing for thousands of disabled and disadvantaged Veterans who are forced to live homeless and hungry on Skid Row.

The front gates remain unlocked during the day to benefit the general public,

like this lady who brought her unleashed, pit-bulldog onto the Veterans Grand Lawn.

When asked if the gates could be formally closed until they’d be officially open with immediate homeless Veteran housing on the Grand Lawn, dictator McDonald sent a dishonest and dismissive e-mail declaring: “Closing them [gates] again would be a significant step backwards, and send the wrong message to our fellow Veterans.”

Incredulously, the VA’s dictator-in-chief denies any and all crisis housing for homeless Veterans on the same Grand Lawn that the general public is openly welcomed with perilous off-leash dogs.

Moreover, the VA also has a verbal agreement with the City of Los Angeles to illegally occupy 12 acres of Veterans land for another public dog park and recreation park – “rent free” — and King McDonald won’t dare demand the land back for housing war-injured and impoverished Veterans because his first priority is to serve the “wants” of his wealthy friends who want this land as their own fiefdom, instead of him responsibly honoring the “needs” of our homeless Veterans.

“Woe to the land that’s governed by a child.” – Shakespeare, Richard III

It’s time to put honest and mature adults in charge of governing Veterans land at the Los Angeles VA, and that requires the dethroning of VA dictator-in-chief Robert A. McDonald who has repeatedly lied to Veterans while bowing to the demands of his wealthy friends.

The history of Robert A. McDonald is a history of repeated lies, including he’s lied about his Military service, lied about the number of VA bureaucrats who’ve been fired, lied about a public gate-opening ceremony being canceled and then lied that the gates cannot be closed once they were opened at a private ceremony, even though the gates are formally closed every day at 5 PM and re-opened the next morning at 8 AM.

His top aides have repeatedly lied to Veterans and plagiarized their plans and passed them off as their “own”.

Dictator McDonald not only violates his public Oath of Office to uphold and defend the U.S. Constitution, but also violates his West Point Military Academy Cadet Honor Code Oath: “A cadet will not lie, cheat, steal, or tolerate those who do.”

On behalf of all disabled homeless Veterans and for the greater good of their property that remains in extreme danger, this is to demand that the duplicitous Robert A. McDonald surrender his faux reign as self-appointed king of the VA and resign from his entrusted duty as a public servant for America’s Military Veterans.