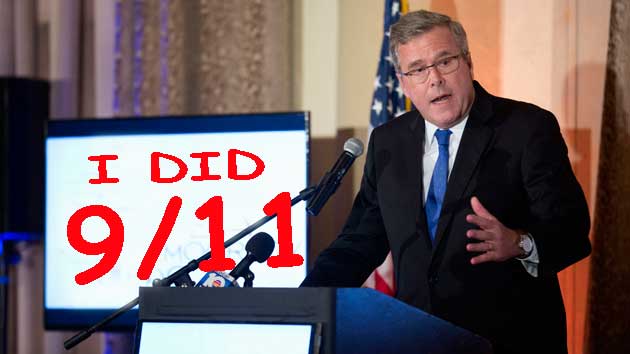 As Jeb Bush geared up to announce his candidacy for President, rival Rand Paul fired a pre-emptive shot across Jeb’s bow: Senate Bill 1471, a companion to HR 14 declassifying the still-secret 28 pages of the 2002 Joint Congressional Inquiry into 9/11.

According to former Senator Bob Graham (D-FL) and other informed sources, those pages show that the alleged 9/11 hijackers were funded by the Saudi government through its US embassy – which was headed by a Bush Crime Family “made man,” Prince Bandar, affectionately known as “Bandar Bush.”

So Rep. Steve Stockman hit the nail on the head:

“If it (the 28 pages) came out it would be devastating to some Republicans who are thinking about running for president. I think that’s one reason there’s been a drive not release it, ” Rep. Steve Stockman,  R-Texas,  told WND.

In the wake of Rand Paul’s move to declassify the 28 pages, Jeb Bush has announced that he will run for president as an “outsider”:

Jeb Bush Says He Will Run as a Political Outsider

As VT editor Jim Dean always says, you can’t make this stuff up.

How does Jeb think he’s going to sell us on his “outsider” credentials?

“Hi, I’m Jeb Bush …  but not THAT one. I’m a completely different Jeb Bush, one you’ve never heard of before – an outsider. While the other Jeb Bush was serving as Governor of Florida and heir apparent to the CIA drug smuggling and money laundering operation at the apex of the Deep State that rules America and much of the world from behind the scenes, and participating in the greatest crime and coverup in American history, I was an unknown, a mere homeless man, coincidentally bearing the same name, sleeping in the bushes outside the Governor’s Mansion.”

I guess if they could sell us the official story of 9/11, they figure we’ll believe anything.

Nice try, Jeb. But we have evidence that Jeb was involved in the fake Florida “flight schools” that pretended to train the “hijackers” while actually serving as CIA drug import airstrips. As veteran journalist Daniel Hopsicker reveals in Welcome to Terrorland, the biggest smack bust in south Florida history happened at the same airstrip where Hebrew-speaking “Mohamed Atta” was pretending to learn to fly. When the DEA realized they had accidentally busted the CIA, they returned the plane to its owner and dropped all charges.

The FBI took all our files, everything. They loaded the files right outside this window into two Ryder trucks, then drove them right onto a C-130 military cargo plane at the Sarasota airport, which took off for Washington with Jeb Bush aboard. (31)

Hopsicker remarks: “We will come back to the question of the Governor of Florida’s national security responsibilities. The important point was that taking files was a lot different than copying them. The FBI wasn’t taking any chances.”

Jeb Bush and the FBI stole not just the police files, but all of the records associated with the two “Flight Schools” a.k.a. CIA drug smuggling stations run by suspected CIA-linked narcotics mobsters Rudi Dekkers and Wally Hilliard. Hopsicker writes:

Records from the flight school (sic) were deemed sensitive enough to have merited being escorted back to Washington by Florida Governor Jeb Bush aboard a C-130 cargo plane which left Sarasota less than 24 hours after the September 11 attack. (185)

Jeb Bush was apparently very close to heroin smuggler Wally Hillard, owner of the “flight school” that pretended to train the “9/11 hijackers” including Hebrew-speaking “Mohamed Atta.” Even after being nailed for smuggling 43 pounds of heroin aboard his twin-engine King Air, Hillard was openly backed by Jeb Bush in his new drug smuggling venture, a fake (CIA drug smuggling) “airline” called Discover Air. Bush even publicly toured Discover Air’s facilities and praised its narcotics-drenched management. (Hopsicker, 328)

Alongside narcotics smuggling and murdering almost 3000 people in the worst crime ever committed on American soil, Jeb Bush is also a prime suspect in the election fraud that delivered the presidency to his brother W in 2000 and set the stage for 9/11.

“Asked who controls the server that operates that email address, Bush spokeswoman Kristy Campbell responded: “He owns it.” The server was housed in a state-owned office building during the years that Bush served as governor, from 1999 until early 2007. Using a personal email address and running the address on a personally owned server can help protect emails from subpoenas and other legal actions.”

So when Jeb was directing the election fraud effort that handed the presidency to his brother, and then helping perpetrate and later covering up 9/11, he was minimizing his exposure by doing business on a personal email/server.

Listen to Kevin Barret on Truth Jihad Radio Taking about 9/11, Rand Paul and the 28 pages

Ironically, Bush has been bashing Hillary Clinton for using private emails to conduct public business. And in another “you can’t make this stuff up” moment, Bush says he, unlike Hillary, had the right to use private emails because his dealt with “potentially sensitive information” including national security issues:

Someone needs to expose Jeb’s emails and reveal that “potentially sensitive information.”

Anonymous, where are you when we need you?