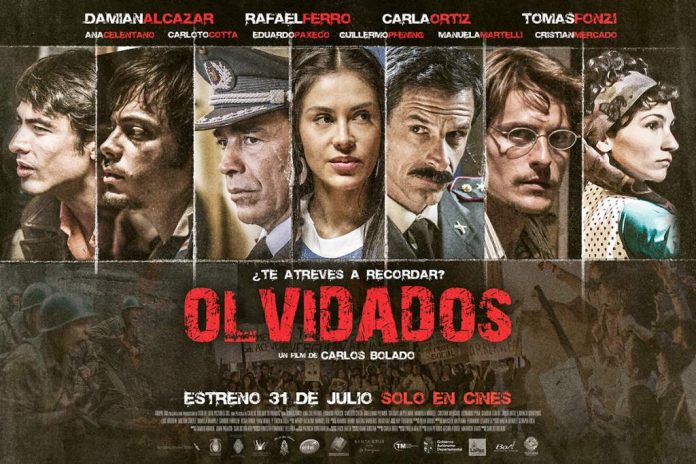 This film produced by Carla Ortiz and directed by Carlos Balados a well known Mexican film maker which shows the USA’s manipulation of South America in the 1970s was Bolivia’s official entry as a foreign language film for the 87th Academy Awards.

It screened at the Festival de Cannes on May18, 2015. The beautiful actress Carla Ortiz welcomed me to the screening  and invited  me to a soirée on a yacht afterwards. The film was introduced by Bolivia’s ambassador to France, Jean- Paul Guevara.

Little did I know that it would be very hard to view this film because of the scenes of torture and brutality.

Olvidados depicted scenes from the 1970s  Operation Condor , a US backed program to put right wing dictators in Latin America hoping to prevent the spread of communism. The

USA  CIA  provided arms, training and support to the military in Argentina, Chile, Bolivia, Paraguay and Uruguay which led to the disappearance of thousands of law abiding citizens who were accused on being anti-government. This represents the worst violations of human rights in history while countries outside of  South America did nothing to help the victims.

Although Los Olvidados is fiction, it is based on true scenarios.  The film begins as we see that an aged decorated Bolivian General (Damián Alcázar, The Chronicles of Narnia: Prince Caspian, El Narco) suffers a heart attack and then looks to redeem himself for his violent past.  He confesses the truth to his son about his role in abduction, persecution and  executions of men and women.

“Among the people who were “disappeared” are journalist Marco (Carlotto Cotta, Tabú), dancer Andrea (Ana Calentano, El Mural), activist Antonio (Tomás Fonzi, The Roldans,  Botineras) and pregnant Lucia (Carla Ortiz, Gotitas de Amor, Xibalba) – all of whom were brutalized and forced to endure heinous punishments at the hands of José and other military leaders, which produced a cascade of lies and betrayal across generations.”

It was difficult emotionally  for me to watch the brutality in this film knowing that events like these depicted really happened.  To know the CIA helped in these efforts is to me just abominating although I am not surprised.

Olvidados is a film to remember those who were forgotten.  It runs 112 mins.

Afterwards those attending were invited to the Blue Marin for an outstanding cocktail soirée with good wine and great food. It was there that I spoke with many people including  Carla’s sister,  a wine producer from California and people  in the film industry.