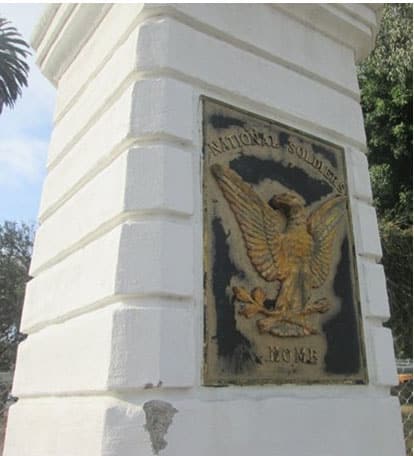 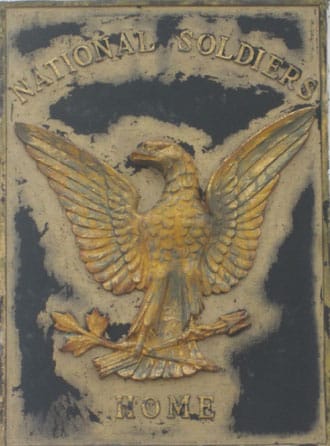 At the south entry gate of the Los Angeles Veterans Home (Los Angeles VA) there are two majestic columns that have historic plaques dating more than 125 years signifying the legend of LA’s original National Soldiers Home permanently established in 1888 that welcomed Civil War Veterans of the Grand Army of the Republic to live on these sacred grounds.

Tragically, somebody has irreverently vandalized and desecrated one of the four plaques on the two columns (placed on front and back) and subsequently this national treasure can never be restored to its historic natural beauty of more than a century standing guard outside the sacred grounds of what is now reverently call the “National Veterans Home” to honor all men and women who have served in our United States Military — Army, Navy, Marines, Air Force, Coast Guard, National Guard and Merchant Marines.

This willful and malicious desecration and ruination of such a noble memorial embracing Veteran history is unforgivable and the culprits must be sought and brought to Justice. The VA needs to bring in the FBI for assistance because this is premeditated mutilation and defacement of government property — an American treasure — an historic plaque commerating the original National Soldiers Home.

There’s a large chunk of concrete on the aged column that was broken away during the vandalism and the historic plaque is forever ruined and can never be restored to its more than 125 years of natural aging.

Could this this be the result of local gang activity?  Who else would be so immature and thoughtless?  Or could it be the work of monument-destroying terrorists, or even anti-Continental Army terrorists?

Regardless, there should be a reward for the capture and prosecution of whoever vandalized and mutilated this ancient historic plaque signifying the legacy of the Grand Army of the Republic and the benevolent land grantors to the Deed of 1888, Senator John P. Jones and Arcadia B. de Baker.

Over the years, Veterans sacred land here has been pillaged and plundered for non-Veteran use. Now, one of the last sacred symbols of Veterans noble heritage dating to the Civil War has been irreverently sabotaged.

It’s another sad day in American history … nothing is sacred anymore … nothing!