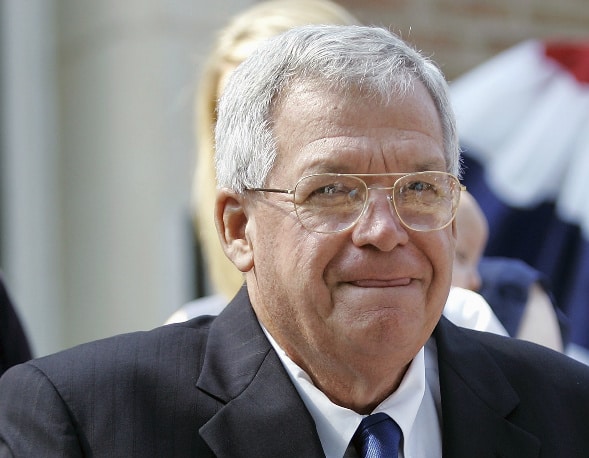 A while ago Dennis Hastert, Speaker of the House of Representatives during the “W” Bush administration was arrested by the FBI for fraud and money laundering charges. Hastert was third in line for the presidency, and a major force for the continual moralizing of the right wing.

His real crime is serial rape of students when he was a secondary school coach and scout leader. His criminal charges are for hiding millions paid in blackmail to silence victims. ABC News published photos of teenagers he had taken on an “Explorers” trip to the Bahamas.

Those railroaded into prison by Washington power brokers seldom live very long, often developing strange cancers like with my good friend Congressman Mark Siljander, oddly a longtime friend of Hastert.  Siljander was indicted for money laundering related to terrorism when he went to Bush (43) with evidence that should have stopped the 2003 invasion.

Hastert is also powerful enough to arrange murders as well.

Whistleblower Sibel Edmonds had accused Hastert of espionage, money laundering and drug trafficking in Chicago. Edmonds had phoned in on a C-Span television segment, putting the charges, quickly pushed “under the table,” on the record.

In return, drug money laundered into election coffers guaranteed Hastert and his cohorts continual reelection and generous financial rewards after leaving office. All they had to do in return is keep Israel stocked with cluster bombs, napalm and white phosphorous. Israel tends to use up their stocks rather quickly.

Hastert, along with John McCain, Lindsey Graham, Newt Gingrich and Bob Livingston led the impeachment drive against President Clinton. They are also the voice of all that is moral and religious in Washington.

We know about Hastert. He was chosen as Speaker of the House because his predecessors, Newt Gingrich and Bob Livingston, both Republicans, had to resign because of “non gay” sex scandals. To the GOP, it was safer to promote a serial pedophile, like they do in Britain, than risk a womanizer.

There is little question about Senator Lindsey Graham. Graham recently retired from the US Air Force where, for decades, he had serial affairs with young male airmen. His command, in Charleston, South Carolina, was a center for gay antics in the military just like George W. Bush’s Air National Guard unit in Houston was during the Vietnam War. We might well be honest, “while George W. Bush avoided serving in Vietnam” though both his opponents,  John Kerry and Al Gore, served in Vietnam.

We could talk about Bush, his history and that of his brother “Jeb” at Andover, typical “boarding school antics.” With Bush, a simple mention of former Marine and gay escort Jeff Gluckert, who push placed on the White House press corps under the name “Jeff Gannon,” a “constant companion” and “regular” for White House sleep overs.

The issue is more than hypocrisy, the Christian Zionist right and the continual moralizing. When Bush brought scandal ridden Paul Wolfowitz over from the World Bank, many were relieved that at least one heterosexual was going to be working near the presidency.

Highest level sources have confirmed that Condit was blackmailed to “reroute” nuclear weapons purchased from former Soviet republics into the world arms markets. Exhaustive documentation exists on this and its aftermath.

Levy’s alleged killer, a simple street criminal, arrested after investigators were pressed to “move on” is up for retrial as authorities now admit that when the investigation was interfered with from corridors of power.

At the time I was working on a project with Pentagon and White House counter-terrorism. I, as were most Americans, was oblivious to the real Bush White House, rent boys smuggled in and out, rooms set aside for sexual trysts and prominent Washington families pushing to NOT have their children begin their careers in government.

“My dad, a former ambassador, told me I wouldn’t be safe in the White House, so I took a Pentagon job instead,” I heard from one of my contacts.

During the AIPAC spy scandal, former member of the National Security Council, Gwyneth Todd, was subjected to regular dinners where prominent Bush insiders bragged about sexual encounters in public restrooms.

These tales of debauchery were recorded along with admissions of espionage as well. The FBI agents running the investigation were put under gag order and transferred. The espionage continues.

Others stories, now well documented, go much further, Washington parties had transitioned. Normally, during the 1970s, those invited to stay after hours at discreet VIP events in Washington would find themselves snorting cocaine off call girls. Cocaine fueled the Carter administration. All that changed with Reagan and Bush, changed back during Clinton and changed back with Bush again.

Cocaine and call girls became amphetamines and little boys and the biggest criminal cover up until 9/11 failed to rock anywhere as witnesses disappeared, silenced jailed, dead, gone, forgotten. Where call girls were driven home in limousines, abused children were smothered and driven to trash dumps.

Are there generalizations that can be made about Washington? Bribery and sex have always been there. Espionage to the extent it lives today, as pointed out by Sibel Edmonds, did not. Were Jonathan Pollard, who has spent nearly three decades in prison for spying, to have been doing what he did today, nobody would care.

There is a reason the Hastert investigation is being quashed. It is more than the statute of limitations having run out on what may well be hundreds of counts of child rape. It is that Hastert is one of many and that his crimes are typical of those around the Bush family, above the laws of men and their gods.

If it was Hastert, we know well not just that most had been doing the same but that it could easily be proven. By 1990, according to highly placed sources, the FBI and CIA did little but pay off or silence those accusing government officials, almost all Republicans, of sexual misconduct and worse. The term “Reptile fund” was used, the “reptiles” being members of congress, White House and cabinet officials.

Why is this important?

Were one to look at any US policy, be it backing for criminal groups like ISIS or the Kiev junta, the mobsters in Tel Aviv or the Saudi despots, no sense can be made of any of it unless massive endemic corruption is taken into account.

With billions stolen each week in Washington, money alone is hardly a motivation. Remember, these are the most powerful people on earth, it can’t simply be dirty sex or a need to cause suffering, though with some, McCain and Cheney come to mind, causing suffering might well be motive enough.