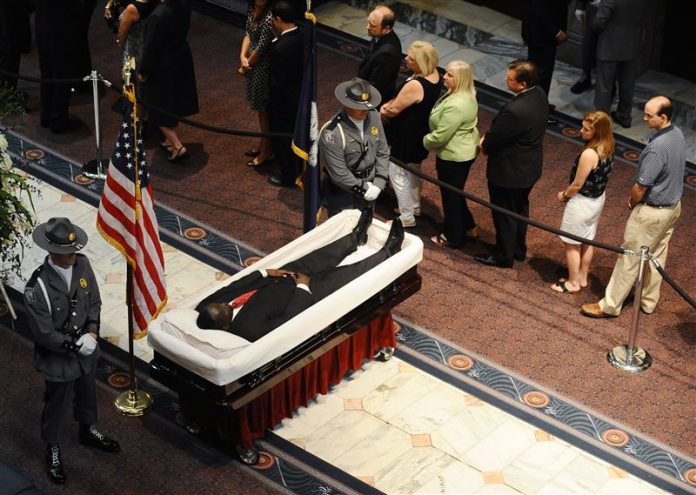 Dylann Roof, we are told, lived at home, had no friends, no online life other than a 5 minutes old Facebook page, no school history past the ninth grade and one of the worst haircuts in history, straight out of a Robin Hood movie. The initial media details on his life don’t make any sense, almost as though the spirit of Adam Lanza, the reputed Sandy Hook shooter had infested his soul.

Today, his 2000-word manifesto was conveniently found on a website that makes reference to Rhodesia, formerly an apartheid state, now one of the world’s political disasters, a State more than failed. An examination of the referenced website finds it innocent enough, strongly pro-Israel and of limited controversy.

The manifesto itself is an insane document, not that it is a rambling diatribe, far from it. It is carelessly superficial in nature, lacking feeling and personality. Yet inquiring minds might as what should it have?

Imagine a 21 year old mama’s boy with a “Puddin’ Bowl” haircut seldom seen on males. He walks quietly into a church on a quiet afternoon, sits down and pretends to pray. Then he pulls out a 13 shot .45 caliber Austrian made Glock pistol, which his father had bought him. For the next 20 minutes, he reloads and pumps 250 grain bone crushing bullets into the bodies of 9 people.

Thus far we have no record of Dyllan ever visiting a psychiatrist, being expelled from school or even getting into a shoving match. There are no violent video games on his computer, no admiration of Hitler indications, no worship of bin Laden or desire to join ISIS.

Put yourself in his place. These are bullets that will kill a bear. He is said to have reloaded 5 times. The sound should have been heard from blocks away. Maybe as things develop, information will be released that hundreds heard the shots, that police were dispatched but got caught in traffic and that Dylann Roof was on dozens of anti-psychotic medications and was a loner.

What I want is to understand what happened and, providing I am able, to frame how this can be understood. However, I am not sure this is possible. I am already stunned in disbelief as it is. I have just described a scene few movies would attempt to portray.

You see, we have had so many of these, theatre shootings, military base shootings, explosions at running events and small children slaughtered. Then when we step back for a second, looking at conflicts in Syria and Iraq, at Yemen and Gaza, at Nigeria and Chad and more places than any of us care to count. We feel overwhelmed and lost, as though we are meant to feel powerless, overwhelmed and lost.

Without delving into theories, there are still many inconsistencies in the Hebdo attacks, Sandy Hook, the Boston Marathon bombing and the Fort Hood shootings that defy what the public is demanded to accept as true. Similarly, the Gabby Gifford shooting in Tucson is a hodge podge of inconsistencies that become more convincing the more carefully they are analyzed.

If we add the Breivik mass killing in Norway to the group, we have an inexorable pattern. If we take each of these cases, where shooters with no military experience, no history of violence, sometimes no history at all, calmly reload weapons and execute one person after another, it all becomes like scenes from a television series no one should watch.

As a combat veteran, I understand the process, firing a weapon, reloading it, firing it again though, in Vietnam there were people shooting back. There are thought processes that should be going on, related to empathy, human suffering and even self-preservation.

Dylann sat for an hour pretending to pray. He wasn’t in a murderous rage but, as with Breivik and so many others, inexplicably calm, reloading, killing, mechanical, controlled, impossible.

You see, hiding a fully psychotic personality for years isn’t easy, not for an Army psychiatrist, not for two college age brothers from Chechnya, not for a the other young many, so many of them, as they seem to appear like magic, no warning whatsoever, though the media tries so hard to invent an understandable rationale.

In truth, none of this is real, as well it shouldn’t be. If we can’t imagine any of this happening, if we can’t imagine any of the people existing it may well be that there are things we just don’t know about the world. In some cases, maybe many, conspiracy theories such as those outlined by Dr. Kevin Barrett in his book; We are Not Charlie Hebdo: Free Thinkers Challenge the French 9/11, are more powerful than the conventional narrative.

If a “conventional narrative” is, in itself, an unlikely and unconvincing explanation, then why is it considered “conventional?” Is there a process for certifying unreasonable falsehood as an explanation for the inexplicable? The answer to that is a resounding “yes!”

With Dylann Roof we have a manifesto. The text is available to all and is likely to lose little if subjected to mechanical translation. There is little in it that reflects actually having been written by a single human being. One can only give an opinion based on certain aspects of subjective analysis and some experience dealing with questionable documents. The “Roof Manifesto” is certainly a “questionable document.”

I had my 21st birthday in South Vietnam but, looking back as a parent and grandparent, I see Dylann Roof as a child. Were it possible, I would talk to his parents, family and everyone he knows.

Someone will eventually do this and will either impart some magical insight into what is very much one of many enigmas or, as is too often the case, will take what information is given and crunch it into a conventional narrative as we have seen time and time again.

The most famous shooter of our age, Lee Oswald, has never been fleshed out in the mainstream media. Was this when the conventional narrative became the rule of thumb in state sponsored murders or terrorist acts? Should we go there even in cases as simple as the shootings in South Carolina?

My personal answer would be yes, but done with reluctance. You see, once you begin down that slippery slope of government sponsored killings, mass surveillance, secret prisons, torture, illegal wars, then blowing up citizens or shooting up a shopping center is not so hard to imagine.

We had begun discussing the manifesto. For those who don’t know America or the Carolinas, North and South, where political extremism and hatred tend to abound more than a bit and have for generations, the manifesto is a rather mild document.

It is like it was written by a committee of people, as it appears to have multiple writing styles, and shows none of the normal characteristics of language and culture that demonstrate the specialized geographical origins of South Carolina. It almost looks as though a screenwriter hacker from Brooklyn were doing a rewrite on an episode of “Seinfeld Visits the Bible belt.”

Do not fear reading the document if you have avoided doing so. There is nothing remarkable about it other than its lack of remarkableness. Again we return to that difficult area and I beg your indulgence. Turn away or continue reading, your choice.

Again, picture a young man, unremarkable, loved by his parents, who stands up among a dozen mid-week worshipers he has spent the last hour among. In his light clothing he has secreted a large heavy semi-automatic pistol and half a shoe box full of loaded magazines.

These are big bullets, high capacity magazines and a big weapon with a 4.6 inch barrel, a large weapon for a law enforcement officer.

As of yet, we have no details of what ensued though they will come. Picturing this in your mind should be upsetting, violent and worse than pornographic. Where did this person spend 21 years concealing that they were a monster? Why do we have so many of them?

What kind of people burn other people alive for YouTube? Then again, who drops cluster bombs on children playing on a beach? Can such a person, capable of such darkness and truly insidious evil bequeath us a smug and empty middle school book report as a manifesto?