Rabid Zionist author from New York Michael B. Oren has written a memoir of his time as Israel’s ambassador to the United States called Ally: My Journey Across the American-Israeli Divide

In this new book, he provides a frank, fascinating look inside the “special” relationship between the USA and Israel.

Michael Oren served as the Israeli ambassador to the United States from 2009 to 2013. 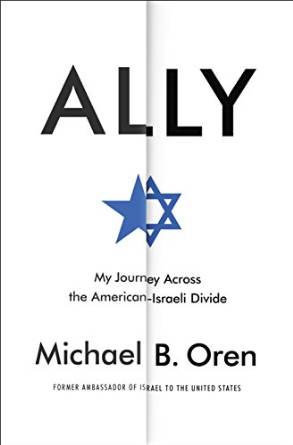 An American citizen born in New York and a historian by training, Oren arrived at his diplomatic post just as Benjamin Netanyahu, Barack Obama, and Hillary Clinton assumed office.

During Oren’s tenure in office, Israel and America grappled with the Palestinian peace process, the Arab Spring, and existential threats to Israel posed by international terrorism and the Iranian nuclear program.

Forged in the Truman administration, America’s alliance with Israel was subjected to enormous strains, and its future was questioned by commentators in both countries. On more than one occasion, the friendship’s very fabric seemed close to unraveling.

Ally is the story of that alliance—and of its divides—written from the perspective of a man who proudly serves Israel at the expense of the U.S. taxpayer, this book shows a deeper insight to the lunacy that Israel and how it rapes the American system as its host while it continues to fail humanity by propagating a 19th ideology that no longer works for our 21st century.

In fact, one can’t help see the similarities of Oren’s traitorship to his citizenship in the United States with those that worship the confederate flag against the United States of America.  Is he an American or Israeli?  Who does this American citizen represent and why the fanatical loyalty to some other country that says nothing to our American taxpayers about our lives?

Nevertheless, no one could have been better suited to explain the indigent loyalties to Israel and against the United States of America than Michael Oren—a man equally at home jumping out of a plane as an Israeli paratrooper terrorizing indigenous peoples in Gaza and West Bank and discussing Middle East history on TV’s Sunday morning political shows.

In the pages of this fast-paced book, Oren interweaves the story of his personal journey with behind-the-scenes accounts of fateful meetings between President Obama and Prime Minister Netanyahu, high-stakes summits with the Palestinian leader Mahmoud Abbas, and diplomatic crises that intensified the controversy surrounding the world’s most contested strip of land.

A story of a young man who refused to relinquish a pyschotic dream—irrespective of the obstacles—and an inherently Israeli story about oppression of indigenous peoples while empowering one’s own delusional supremacy, Ally is at once a record, a chronicle, and a confession.  But, above all, this memoir is a testament to an alliance that continues to rape the American taxpayer offering ZERO benefit to U.S. citizens and will remain so as long as AIPAC and its assigns continue to bribe and bully our U.S. politicians using our legally usurped system vis-a-vis Citizens United laws and others that give these thugs a green light to own our politicians and piss on the American taxpayer.

On cue, the New York Post has extreme praise for Ally.  They say “Michael Oren is going to be the talk of Washington and Jerusalem. . . . I’m not sure that in the annals of diplomatic history there’s ever been anything quite like this astonishing account of Oren’s four years as Israel’s ambassador in Washington. It’s an ultimate insider’s story told while all the players save Oren are still in place.”

But former American ambassador to Israel Martin Indyk does NOT have praise and directly challenges racist lunatic Oren on Fareed Zakaria’s GPS show this morning.

Watch Fareed expose this lunatics contempt for the non-Jewish citizens of Israel and try to justify it calling Jews a race as he tries to claim they are same as a Nationality.