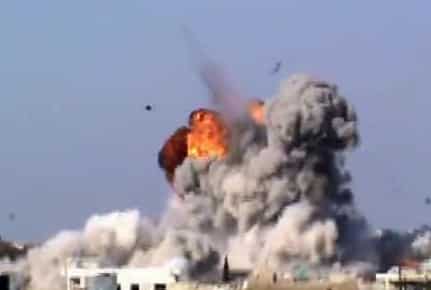 On Friday, June 26th, a Syrian Air Force strike killed an Israeli general and 20 militant leaders including liaison staff from Saudi Arabia and Qatar.  This was one of two strikes in the region targeting foreign military forces operating inside Syria.

The second attack, according to Dr. Haitham Abu, of DESI (European Department of Security and Information), wiped out a Chechnyan sniper platoon recently arrived from training facilities inside Jordan.

Israel’s Operation Southern Storm, the long planned move on Damascus through Jordan has suffered a major setback.  Southern Storm was intended to be coordinated with attacks on Lebanon and a Turkish incursion into Syria from the north, scheduled for July 8, 2015 according to intelligence sources.

Both locations destroyed were supposed to be under, though inside Syria, extended Iron Dome air defense protection and impervious to attack.  American Patriot missile batteries had been relocated to forward positions to provide air cover and support for al Qaeda/ISIS operations under Southern Storm according to intelligence sources.

Both attacks were in Daara Province, Syria scene of months of intense fighting.  According to sources inside Syrian intelligence, the Israeli general killed was commander of Operation Southern Storm, a coordinated three pronged offensive aimed at the city of Daraa.

Yesterday, Daraa was hit with dozens of mortars and Grad rockets.

Operation Southern Storm is commanded from a MOC (military operations center) in the Jordanian city of al Karak.

Al Karak or al Karek is a city of 20,000 East of the Dead Sea, inside Jordan.  Famous for its crusader castle, al Karak is easily reached from Israel by helicopters that fly up the Wadi Karak to avoid detection.

The Moc at al Karac was built by Israeli intelligence and contains satellite uplink and full intelligence fusion facilities.  The”Moc” operates in coordination with 4 CIA training facilities inside Jordan and the massive intelligence and logistics center at the newly built Saudi Arabian “diplomatic” complex in Amman.

From al Karak, both the Israeli general and Chechnyan teams entered Syria at Nassib, a border crossing controlled by ISIS, south of the Syrian city of Daraa.

On the evening of June 25th, under close surveillance by both Syrian human and satellite intelligence, the Israeli command team traveled to Karaz Prison in southern Daraa Province, an ISIS command and logistics facility used to store supplies and transit jihadists arriving from Israel and Jordan.

There the Israeli general met with leaders of al Nusra, the “Victory Army, the Free Syrian Army, Brigades of al Muthana and al Ezz.  According to witnesses in attendance at the Israeli briefing, Israel thanked them for their service, promised continued intelligence, logistical and medical support and dined lavishly.

Plans were made to unleash a three pronged attack on Daara with 15,000 militants from 4 separate groups.

Shipments of Israeli TOW and LAAW missiles along with German Milan missiles had been delivered earlier that day, flown into Jordan from Israel and convoyed into Syria.  Some of these missiles were from Israeli stocks recently replaced by the United States after Israel claimed to have used them in attacks on Gaza.

In actuality, many of the munitions listed as expended in Gaza, weapons America promised to replace, had been sent to ISIS and used against Iraq and Syria.

From there, the Israeli general and up to 20 staffers moved to a secure villa a few miles away.  That location is now a smoking ruin.

According to sources in Damascus, the Syrian Air Force received accurate intelligence about both meetings and quickly moved and pounded both places. It is reported that the Syrian Air Force attack resulted in the killing of 80 militants, in addition to the commanders leaders numbered at 20 , the Israeli General, and the Chechnyans .

The Chechnyan sniper platoon was billeted in the town of Saida, Daara, Syria under tight security when it was hit by the air strike. Destroyed with the Chechnyans, said to be sent to target President Assad and other Syrian leaders, was a communications center.

Similarly, attacks in Deir Ezzor on the along the Euphrates River in Eastern Syria along with these attacks are intended to disrupt command and control operations which representatives of the Syrian government assert may well be run out of Washington.

Two weeks ago, in a Washington Post report, it was revealed that congress was considering cutting the CIA’s $5bn “slush fund” used to finance operations against Damascus.

With the fall of Erdogan’s “political star” in Turkey and Saudi Arabia’s military setbacks in their war with Yemen and increasing political unrest inside Jordan, the quality of human intelligence coming out of these countries, outlining their support for the Islamic State and her “sisters,” is increasing exponentially in both quantity and quality.

With the attacks this week in Sinai killing at least one hundred, sources within Egypt indicate that their seeming detente with Israel and Saudi Arabia may well be coming to an end.  From the Jerusalem Post:

Israel closes the Niztana and and Karem Shalom border crossings Wednesday following military attacks in Egypt’s North Sinai that killed at least 50 in one of the biggest coordinated assaults in the insurgency-hit province.

Sources indicate that Egypt’s homegrown ISIS contingent may well be trained in Jordan as well and transited through Israel as the recent pattern of attacks supports.