We discuss the Charleston shooting and other apparent false flags, the topic of James Tracy’s new article:

Is Charleston Shooting a Trojan Horse for Internet Censorship?

James Tracy runs MemoryHoleBlog and teaches Communication at a Florida university. He says he will assign We Are NOT Charlie Hebdo as required reading in a future course.

Dr. Tracy is not the only professor who endorses We Are Not Charlie Hebdo. Graeme MacQueen, Professor Emeritus at McMaster University and author of The 2001 Anthrax Deception, along with leading Canadian media critic Barrie Zwicker, author of Towers of Deception: The Media Cover-up of 9/11, just posted a review at Truth and Shadows:

By Barrie Zwicker and Graeme MacQueen (Special to Truth and Shadows) 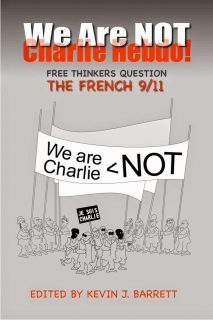 Despite his being an international outlaw, Kevin Barrett of Wisconsin has been able to turn out a prodigious number of truth-oriented radio programs, articles and published books, including his latest, the anthology We Are NOT Charlie Hebdo! Free Thinkers Question the French 9/11.

Oh, right, that’s why he’s an international outlaw. His status was confirmed, at least north of the Canada-U.S. border, by Canada’s hard right Harper government. At the end of May the Canadian Border Services Agency (CBSA) turned Barrett back at the border in a hostile manner, preventing him from fulfilling a Toronto speaking engagement.

Barrett might not have had much more luck entering France or Israel, considering that many of the 22 contributors to We Are NOT Charlie Hebdo! provide evidence that those massacred in Paris did NOT die at the hands of jihadist Muslims but under orders from the Deep State, in a false flag operation with heavy Israeli involvement.

One can only hope that Barrett’s mistreatment at the hands of the politicized CBSA will spur sales of this important book.

Why is the book important? In part, because it’s a successful experiment—a rapidly-produced substantial response to a lethal state propaganda action…

Read the complete review at Truth and Shadows