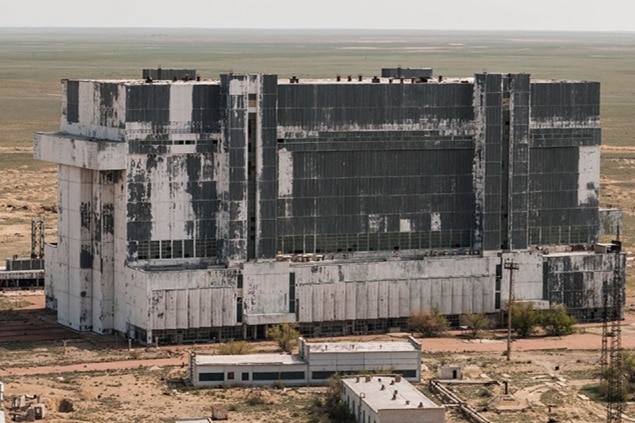 A Russian urban explorer snuck into a disused hangar at Baikonur Cosmodrome in Kazakhstan, where the former pride of the Soviet industry, the Buran, is living out its days at the mercy of looters and dust storms. The OK-1K2, nicknamed Little Bird, was the second Buran program space shuttle, scheduled to make its maiden flight when the USSR collapsed. While the location where it was mothballed was known, photos showing its poor condition, obtained by a blogger and adventurer who calls himself Ralph Mirebs, have caused consternation and fascination in equal measure. “Time and people have not spared these spaceships, and their condition is regrettable. The heat-resistant panels have peeled off, the cockpit glass is broken, and the fuselage is covered with a thick layer of bird droppings,” wrote Mirebs in his blog. The Buran (Snowstorm) program began in 1974. Like many Cold War innovations, it was a response to what the other superpower was doing – in this case the US Space Shuttle Program – and was primarily military in purpose: potentially designed to carry nuclear warheads in a near-orbit war against the West.

The only one that reached space was OK-1K1, the original Buran, which later gave its program its name. In 1988 it performed a 3 hour 36 minute unmanned test flight. When the program was abandoned by a cash-strapped Russian state in 1993, there were five working models in various stages of completion, as well as eight full-scale dummy models, for testing and training. The OK-1K1 and Little Bird were both handed over to Kazakhstan in lieu of payment for the rental of Baikonur. The original Buran and Little Bird were kept together, before a storm destroyed the first Buran thirteen years ago. Little Bird and one of the dummy models were moved into a different hangar. The 62-meter high, 132-meter long cavernous hall is closed to the public, and Mirebs did not say how he was able to infiltrate it. Mirebs was not able to get inside Little Bird, but walked through the OK-MT, which was used for pre-start testing. “It is not clear which parts of equipment were never installed, and which were ripped out and sold off for their precious metals,” wrote Mirebs. A BTS 002 mock-up on display in Germany (Image from wikipedia.org)

Letting the Buran disintegrate in a poorly-guarded warehouse appears like a waste, particularly since even the non-functional models have been popular exhibits. One of the mock-ups was a centerpiece attraction in Gorky Park in Moscow for more than a decade, and is still on display elsewhere. Another is at a museum in Germany, and several more are also open to public, and have traveled between exhibitions. Buran during testing in the late 1980s (Photo: Buran.ru)

“History moves in a spiral, and this a process that repeats again and again. We can long for a lost era, but the facts are that Russia is rapidly losing its status as a leading space power,” summed up Mirebs, who says he is based in Japan. “The future of reusable Russian spacecraft was not pre-determined. Despite the huge financial costs of each launch, they could have been a part of space exploration for years, and could have created a foundation for future developments.”