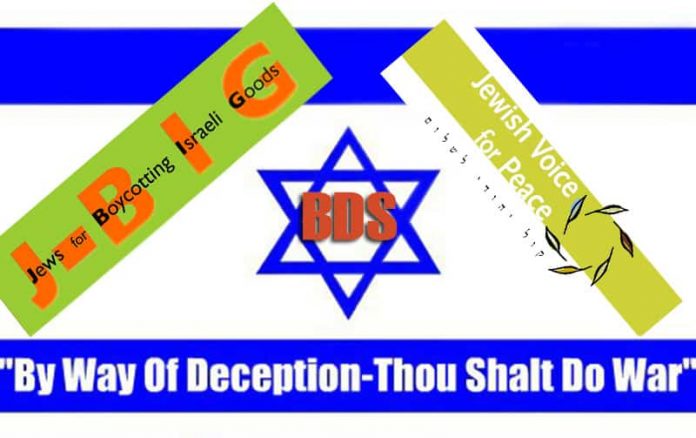 Two days ago, some invaluable information surfaced relating to the treacherous role of Jewish liberals in derailing the BDS campaign. A Ynet article disclosing the Israeli strategy relating to the pro Palestinian campaign disclosed the close links between the Israeli Government and the Jewish ‘pro’ Palestinian organizations. It revealed the manner in which both have been acting in concert to subvert this humanitarian discourse.

According to the Ynet article, Eran Shayshon, Director of Policy and Strategy at the Reut Institute*, had a clear message to his Israeli Government – we need to recruit left-wing groups associated with BDS to control our opposition. The mission set by Shayshon and the Reut Institute was: “to divide and drive a wedge between the leaders of the BDS campaign.”

“For Israel, the key is to actually making a clear distinction between the extremists and the rest. The goal is to divide them,” Shayshon says. “That means to be open to listen to criticism from moderate voices against the government, in order to return the extremists back to their natural size. To achieve this goal, we explained to the government representatives that we have to operate with as large a base as possible; meaning, recruit not only right-wing agencies and groups to the fight, but also left-wing groups who criticize the government.”

This clarifies the role of JVP within the movement and explains the rationale behind the BDS campaign against some of our most profound pro-Palestinians voices (Norman Finkelstein, Alison Weir, Daniel Barenboim, Jacob Cohen and many others).

And here is Max Blumenthal/JVP/ Mondoweiss’ thought policing agenda as articulated in clear by Hasbara merchant Shayshon in Jerusalem: “The message for left-wing organizations is that criticism is legitimate, but there are red lines of terminology and entities with whom we cooperate.” When you read this you may ask yourself, who was it who changed Mondoweiss comment policy, banning any criticism of the Jewish State that analyses Jewish perspectives. Was it Philip Weiss in NYC or Eran Shayshon in Jerusalem?

In case you still find this hard to accept, I’ll be as clear as I can. Shayshon instructed his government that liberal Jews, the Blumenthals, JVPs and Mondoweisses are good for the Jews. Now, we may understand how Max Blumenthal and Philip Weiss make it in and out of Ben Gurion airport. Shayshon has provided us with a possible answer. I guess that the same applies to Omar Barghouti, as long as he keeps close ties with Judith Butler and the Jewish crowd.

Shayshon admits that his strategy wasn’t as successful as he wished.  “We initiated meetings between government representatives and several Jewish left-wing organizations in Israel and abroad, but it did not bear any fruits. So we lost effective and good soldiers for the fight.” We now know that our so-called Jewish ‘allies’ have been negotiating with the Israeli Government behind our backs while claiming to care for Palestinians and their plight. This is a textbook case of a controlled opposition operation. We are inundated with Immanuel Goldsteins. I am not shocked by this–my book The Wandering Who exposes the ideological, political, spiritual and cultural continuum between Zionism and its imaginary Jewish dissent—but I am surprised Shayshon exposed his Sayanim network in our midst. I trust he knows what he is doing.

But the betrayal doesn’t end there.  Even B’Tselem, an organization many of us cherish, is also primarily committed to the Jews and their interests. Uri Zaki, B’Tselem’s former US Director told Ynet, “I went to universities in the United States, specifically on Apartheid Week, in order to explain that I was an Israeli patriot, and to oppose the boycotts. Like the Jewish left-wing groups in America who joined the fight against the boycott, our position has great influence. It is true that we will not fight a boycott of settlement products, but our efficacy in the fight over sovereign Israel’s good name is very obvious, much more than that of right-wing groups.”

According to Ynet, “B’Tselem has already proven its contribution when it strongly criticized the Goldstone Report, which greatly embarrassed South African jurist Richard Goldstone.”

The message is unmistakable. Jewish progressives are dedicated primarily to Jewish interests and the Jewish state is such an interest. There is no way to hide it anymore. This explains why the Palestinian solidarity movement has never achieved anything for the Palestinians. It is now becoming clear that the BDS is the front that Israel prefers to fight. Instead of confronting authentic Palestinians over their Right of Return, Israelis are engaged in an internal Jewish battle over ‘the right to BDS.’ It might be hilarious except that the lives and the prospects of millions of deprived refugees are at stake.