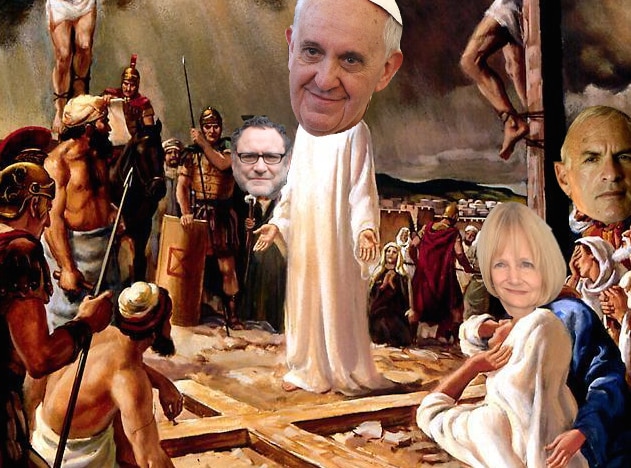 Alison Weir has recently joined the long list of Goyim who have been charged by the Palestinian Solidarity Movement’s Sanhedrin Court. Alison, however, should cheer up, Pope Francis has also been charged in a Sanhedrin court in a different jurisdiction. This time it is the Jerusalem Sanhedrin, pretty much the same Jewish Judicial entity that charged Jesus before he was brought up in front of Roman Governor Pontius Pilate.

An Israeli media outlet reported last week that The Jerusalem Sanhedrin –a Jewish religious ‘High Court composed of 71 sages’, has declared that it is putting Pope Francis on trial unless he retracts his statement that the Jews have no right to the land of Israel or to Jerusalem.

Pope Francis’ crime is that he officially recognised the existence of the State of Palestine. The trial and judgment will be on September 20th, 2015. Fortunately, this leaves Pope Francis enough time to seek legal advice from Alan Dershowitz. However, if Pope Francis chooses to ignore the summons, he will be judged in absentia.

Like JVP’s Sanhedrin’s letter to Alison Weir, the Jerusalem Sanhedrin letter to Pope Francis conveys a clear, threatening and disrespectful Judeo-centric message. However, unlike Alison Weir, who had only to endure expulsion from the JVP synagogue, the Pope may have to face the Wrath of God and his chosen tribe.

“We require from you an apology for your recognizing as a nation those who stole the land, those who are known as the Palestinian Authority, and we are informing the Vatican that the sole God given right to the land of Israel is to the Nation of Israel. If His Honor the Pope, and the Vatican, do not apologize within two weeks of receiving this letter, and if he does not change his ways, we shall judge these actions in the Court of Mount Zion, in a court of 71 Jewish elders of Zion, and enact the prophecy of ‘The liberators will rise up upon Mount Zion, to judge the Mountain of Esau and the kingdom shall be God’s’ (Obadiah 1:21). The court shall judge the Vatican in its presence or in absentia, and it is possible that the Vatican will be found guilty of anti-Semitism, as has been known to be done several times throughout history, and to place responsibility upon the Vatican for all of the outcomes of its actions.”

The letter was signed by ‘The Secretariat of the Court of Mount Zion’. Representing the High Court are Rabbi Yoel Schwartz, Rabbi Dov Levanoni, Rabbi Israel Ariel, Rabbi Daniel Stavsky, Rabbi Yehuda Edri, and Rabbi Dov Meir Shtein. Breaking Israel News admitted that The Sanhedrin has no political or legal status, and clearly has no authority over the Vatican. However, it is comprised of some of the “greatest rabbis of the modern Jewish nation, men who have dedicated themselves to Torah, serving God and Israel.” Apparently one of the primary leaders behind the revival of the Sanhedrin is Rabbi Yoel Schwartz, well known for his advocacy of strengthening non-Jewish support for Israel. It is likely that if the Almighty listens to anyone, Rabbi Yoel Schwartz assumes that it is he.

I guess that the message to Alison Weir, Pope Francis and the rest of us is clear as well as urgent – with all these Sanhedrin courts pouring their wrath on the Goyim, the time to form a Goyim Defense League (GDL) is overdue.