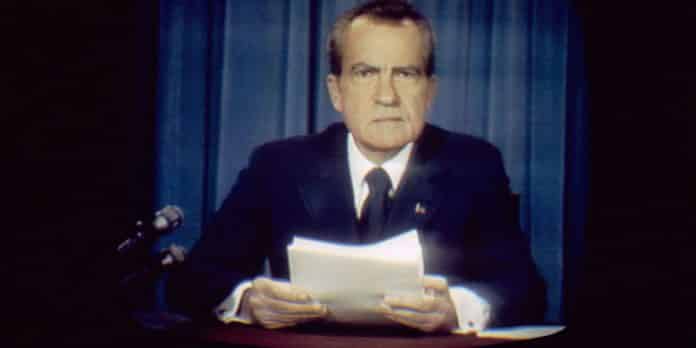 Look at his eyes and you see the frightened look of a paranoid and insecure man who knows that his own tapes and fear based decisions have revealed in no uncertain terms that the game is up ~ his presidency is over. Tim Weiner’s remarkable new book, One Man Against the World: The Tragedy of Richard Nixon  was recently reviewed by Tom Engelhardt who correctly points out ~ Put it all together and you have something like a White House-centered, first-draft version of the way the national security state works quite “legally” in the twenty-first century: Allen L Roland, PhD 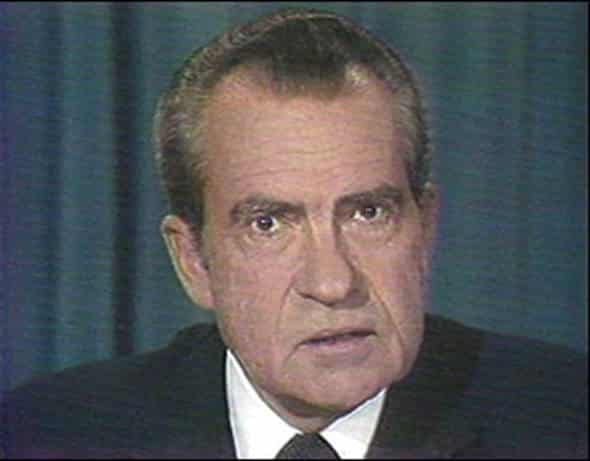 “Always remember, others may hate you, but those who hate you don’t win unless you hate them, and then you destroy yourself.”  ~ Richard M. Nixon

Retired four-star general and former NATO commander Wesley Clark’s remarks to MSNBC News last Friday in support of placing “radicalized” and “disloyal” Americans in World War II-style internment camps must be taken as an urgent warning that the end result of our Orwellian national security state is the growing specter of military dictatorship.

To fully understand our present day paranoia we must go back to its full flowering in the Nixon administration as well as the unsettling realization that we still live in a Nixonian world.

I vividly remember as I sat with my family in Tiburon and watched in amazement that night on November 17th, 1973 when President Nixon said, during a news conference, that he had not obstructed justice and was not a crook whereby he immediately crossed his arms and assumed a defensive position awaiting questions. At that very moment I exclaimed to my wife and children ~ “He’s a crook“

One minute video of that moment  ~

The news conference did nothing to end questions over Mr. Nixon’s honesty. His declaration “I’m not a crook” was used against him ~ and the line would forever be the fodder of Nixon jokes and all associated with the Watergate era especially Tricky Dick.

In April 1974, the Internal Revenue Service ordered that the president pay more than $400,000 in back taxes for making improper deductions ~ and the Watergate investigation continued to uncover misconduct regarding Nixon.

In August 1974, with the House Judiciary Committee having recommended impeachment along with the release of a “smoking gun” tape, that dramatically showed Nixon had approved a cover-up ~ the president finally resigned in disgrace.

But now, 40 years later, we have access to the last of the secret Nixon White House tapes ~ finally made public some 40 years after the first of them were turned over to courts, prosecutors, and Congress.

Tim Weiner’s amazing new book One Man Against the World: The Tragedy of Richard Nixon  brilliantly uses the secret tapes and traces the rapid downfall of Nixon. Weiner’s book will undoubtedly be seen as the ultimate source on that president’s reign of illegality ~ as well as a sordid prelude to our present national security state.

Excerpts ( With my EMPHASIS POINTS )

” Richard Nixon saw himself as a great statesman, a giant for the ages, a general who could command the globe, a master of war, not merely the leader of the free world but “the world leader.” Yet he was addicted to the gutter politics that ruined him. He was ~ as an English earl once said of the warlord Oliver Cromwell ~ “a great, bad man.” By experience deeply suspicious, by instinct incurably deceptive, he was branded by an indelible epithet: Tricky Dick. No less a man than Martin Luther King Jr. saw a glimpse of the monster beneath the veneer the first time they met, when King was the rising leader of the civil rights movement. “Nixon has a genius for convincing one that he is sincere,” King wrote in 1958. “If Richard Nixon is not sincere, he is the most dangerous man in America.”

May 11th, 1973 became judgment day at the White House. First Haig read the memcons (tapes). They were devastating. One passage said: “It was the President’s wish that Walters call on Acting FBI Director Gray and… suggest that the investigation not be pushed further.”

AND THEN THE WHEELS CAME LOOSE ~

“That same morning, page-one stories described the White House wiretaps Nixon and Kissinger had placed on presidential aides and prominent reporters starting in 1969. Kissinger, who was expecting to be appointed secretary of state, brazenly denied that he had chosen the wiretap targets among his NSC staff and national security reporters; he implied he was only following orders. Nixon shouted: “Henry ordered the whole goddamn thing… He read every one of those taps… he reveled in it, he groveled it, he wallowed in it.”

How they were going to stonewall the Huston Surveillance Plan was another question. Nixon had endorsed every kind of government spying on Americans ~ opening their mail, bugging their phones, breaking into their homes and offices ~ until J. Edgar Hoover himself killed the program. John Dean had placed a copy of the incendiary plan in a safe-deposit box and given the key to Judge Sirica. He intended to turn the copy over to the Senate Watergate Committee.

AND THEN THEY CAME OFF ~

“Nixon’s constant refrain had been contempt for court rulings on wiretapping, break-ins, any aspect of “the national security thing.” Nixon insisted: “I’m going to defend the bugging. I’m going to defend the Plumbers [and] fight right through to the finish on the son of a bitch.” But when he thought about people actually reading the patently illegal Huston Plan, he changed his tune. “The bad thing is that the president approved burglaries,” Nixon said on May 17th; he could be perceived as “a repressive fascist.”

AND THEY INDEED DESTROYED THEMSELVES

The tension at the White House was unbearable. With the Watergate hearings days away, Nixon screamed at his underlings as he schemed to save his presidency. Ziegler cautioned him to stay calm: “If we allow ourselves to be consumed by this ~ ” We’ll destroy ourselves,” the president said.

A must read for any student of history and how absolute power can absolutely corrupt.

“I was not lying. I said things that later on seemed to be untrue.”  ~ Richard M. Nixon