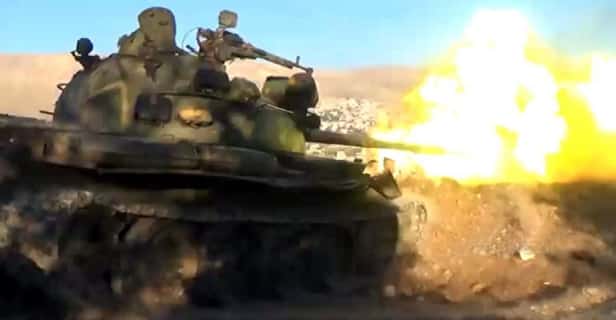 TEHRAN (FNA)- Iraq’s army and popular forces shrugged off a demand by Chairman of the US Joint Chiefs of Staff Martin Dempsey for stopping operations in Anbar, and managed to make more gains against ISIL in the province.

As the Iraqi army and popular forces continue operations against the terrorists in Anbar province, reports said the army troops are about to take back al-Anbar University in Ramadi.

Analysts view the recent advance as a response to the US army’s demand to withdraw the popular forces from Anbar under the pretext that their fight has grown into a war of attrition.

They also say that Dempsey’s demand is aimed at decreasing the popular forces’ role in the victories against the ISIL.

The ISIL seized control of Ramadi in mid-May, sending Iraqi forces racing out of the city in a major loss.

TEHRAN (FNA)- The Syrian warplanes pounded the strongholds of al-Nusra Front in the Northwestern province of Idlib, inflicting heavy losses upon the militants.

The sources said that the country’s fighter jets targeted gatherings of al-Nusra Front in al-Dibshiya and Um Jrein villages and Tal Salmo in Abu al-Dhuor area to the Southeast of Idlib city.

The have not been any accurate report on the number of killed or injured terrorists in the air attacks.

TEHRAN (FNA)- Syrian army continued its mop-up operations against the foreign-backed Takfiri militants in Daraa on Thursday, leaving a large group of them dead.

The army killed a large group of Takfiri terrorists at the West side of Tal al- Za’atar and Yadouda town in the countryside of Daraa, a military source said.

TEHRAN (FAN)- The ISIL terrorist group’s emir in North of Baghdad was arrested in Tikrit, the capital of Salahuddin province, as he was on the run with his wife.

“The security forces arrested the ISIL governor in North of Baghdad, Abbas al-Azawi, along with his wife as they were escaping the region,” Commander of the Iraqi army’s brigade 17 Brigadier General Moed Badai was quoted as saying by Soumeriya news on Thursday.

He said that the ISIL emir was captured near Balad region in Tikrit as he and his wife were on the run to escape through Beiji region, but failed.

TEHRAN (FNA)- The Syrian Army launched massive operations against the strongholds of the militant groups in Central Hama province, and killed at least 20 fighters in the battlefields, military sources said.

The sources said that the army men raided the gathering centers of militant groups in the nearby areas of Job al-Mazare, Jana al-Elbawi, Kfar Zeita and Qasr Bin Wardan in Hama, and killed more than 20 fighters in the fighting areas.

TEHRAN (FNA)- The Syrian Army’s operations against the militant groups in the Northern parts of the country forced the foreign-backed fighters to retreat from their positions in various parts of Aleppo province.

The sources said that the Syrian army men have gained upper hand against the rebels in different parts of the province, including in Khan Toman, Bani Zaid, al-Amirya, Bustan al-Qassr, al-Lairamon, al-Castillo and Khan al-Asal.

TEHRAN (FNA)- The Syrian army retook a strategic area in Hasaka from the ISIL Takfiri terrorists on Thursday.

The army regained full control over building blocks surrounding the cemetery on the Southeastern outskirts of Ghweiran neighborhood in Hasaka city. Provinces, SANA – Army units continued operations against terrorist organizations on Friday, hitting more of their positions in various areas and destroying their equipment and weapons.

Army units destroyed a vehicle and a cannon for ISIS terrorists in the countryside of Tadmur and targeted terrorists’ positions in Tadmur city in the eastern countryside of the central Homs province.

In southern Syria, army units killed terrorists and destroyed their equipment in various areas in Daraa al-Balad neighborhood in the city of Daraa and in al-Nueimeh and al-Bitar farms in the countryside of Daraa province, southern Syria.

A terrorist group that tried to infiltrate towards Bouthaina Hill in the northeastern countryside of the neighboring Sweida province was repelled, with many of its members getting killed. Damascus, SANA – A session of talks was held on Thursday between Information Minister Omran al-Zoubi and Iran’s Minister of Culture and Islamic Guidance Ali Jannati on means of developing media relations between the two countries.

Minister al-Zoubi affirmed the importance of boosting media joint cooperation between Syrian and Iranian press institutions to confront the Takfiri terrorism, calling for forming a team work to put mechanisms and laws as to develop work during the next stage.

“Syria carries on a war against terrorism, not to defend itself only, but to defend Islam and countries of the region,” al-Zoubi said, adding that terrorist organizations which destroyed infrastructure and killed, abducted and looted people, are a Takfiri project, supported by some Arab regimes.

Jannati, for his part, affirmed that Iran’s strategy, since the victory of Islamic revolution, is to support the resistance axis, particularly Syria.

“Since the beginning of the crisis, Iran has believed that solution is political, not military,” Jannati said, calling for forming an international coalition against terrorism.

He affirmed that the international media conference on confronting Takfiri terrorism, which will be held in Damascus on Friday, will have a great role in forming a coalition against terrorism, calling for forming a media front to face the support offered by some countries to terrorism in Syria.

Earlier,  Minister Ali Jannati said the Iranian side participating in the international media conference in Syria aims at contributing to combating extremism in the region, particularly in Syria.

His remarks came upon his arrival at Damascus International Airport to participate in the two-day conference, which deals with the scourge of terrorism sweeping the countries of the region and is held by the Information Ministry. The conference will be held under the auspices of President Bashar al-Assad and will discuss various issues including the role of mass media in confronting terrorism, journalism field work, the need to form an alliance to combat terrorism, and future visions for mass media.

In a press statement during receiving Jannati, Information Minister Omran al-Zoubi affirmed that combating terrorism requires international and regional coordination to meet the its increasing threat to the entire region.