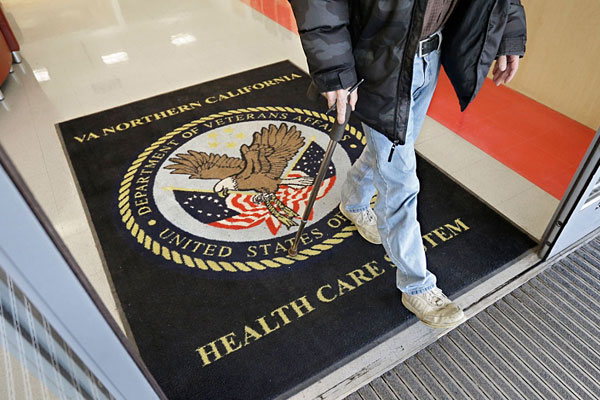 A long-time employee of the Veterans Affairs Department has been charged with falsifying veterans’ medical records in connection with the scandal involving delays in scheduling appointments for vets seeking care.

Cathedral Henderson, 50, has been charged with 50 counts of making false statements for allegedly cooking the books to hide delays in providing care to veterans. Each count involves a patient.

“The indictment alleges that Henderson terminated unresolved consults – medical appointments that had not been scheduled or completed – by falsely stating in VA patients’ medical records that ‘services have been completed or patient refused se rvices,’ ” said a Justice Department press release.

Henderson currently is a technical implementation coordinator at VA — essentially an IT project manager — in Atlanta, according to his LinkedIn profile. He is the former chief of purchase care (non-VA care) at the Charlie Norwood VA Medical Center in Augusta, Ga., and has worked at the department for more than 20 years in financial management, information technology and administration.

He faces a maximum sentence of five years in prison and a $250,000 fine on each count.

“These alleged actions give the appearance that medical care was rendered or, in some cases, the appearance that veterans declined medical care,” said VA Assistant Inspector General for Investigations Quentin Aucoin. “Alterations of medical records and false statements in these records needlessly expose patients to harm and also undermine the integrity of VA data relied upon by VA decision-makers, who oversee and manage operations.”

A July 17 report in The Augusta Chronicle included comments from Henderson’s attorney, Keith B. Johnson, who told the publication that Henderson “was following the directive of his supervisors, and that will come out in court documents.” The report goes on to say, “Johnson also issued a statement saying Henderson has been a ‘model employee’ at the De­part­ment of Veterans Affairs for more than 20 years and had served in the Army.”

The VA placed Henderson on administrative leave as a result of the indictment and “immediately terminated Cathedral Henderson’s access to all of VA’s systems,” said a statement from the department. VA said “additional administrative action” may be taken against Henderson.

“Secretary [Bob] McDonald and Deputy Secretary [Sloan] Gibson have repeatedly said that where wrongdoing is confirmed, disciplinary actions will be pursued,” the statement said.

The VA inspector general has issued 18 reports since 2005 on the problems with scheduling medical appointments for vets and excessive wait times, both locally and nationally. But it wasn’t until spring 2014 – after vets who had been on waiting lists died and an employee at the department’s Phoenix, Ariz., facility blew the whistle — that the issue gained national attention. The department has proposed disciplinary action related to data manipulation or patient care against more than 130 employees.

The department employs more than 300,000 employees, and in 2014, it fired roughly 1,100 of them. The Senate Veterans’ Affairs Committee approved a bill on Wednesday that would make it easier to fire VA employees, and the full House is set to vote on companion legislation next week.