[ Editors Note:  You just can’t make this stuff up. Is long rifle ammo being sold out the back door, like when the US leaves pre-positioned weapons and ammo in Iraq and Syria and they sell them for cash as needed.

That a NATO country is playing “bang, bang” in the training field must have Eurasia breathing a big sigh of relief. But the Dutch can always attack with their beautiful women, where the men will surrender in mass and ask to be treated a little rough during interrogation.

A number of EU countries are very thin on their militaries because they want the US to pick up the tab for ammo if a flight flares up. That reflects an attitude that since they are fighting for the US, our taxpayers should cover the ammo resupplies.

We saw this happening in the air campaign during the Libyan no fly zone. It was like their defense contractors put the call in to “shoot off everything you have so the government will be forced to give us some new orders!”

But one good thing about having an unprepared military, it makes you focus more on avoiding getting into shooting confrontations, especially the non-defense kind for someone else’s benefit… Jim W. Dean ] 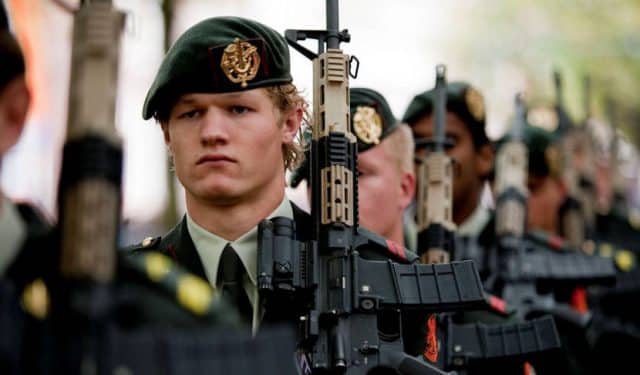 The Dutch army is running low on ammunition, according to local media reports. With a number of compulsory shooting drills canceled due to a lack of bullets, soldiers have been allegedly forced to imitate the sound of the crack of a rifle when pulling the trigger.

According to a confidential e-mail from the Defense Ministry, seen by Dutch broadcaster RTL, the acute shortage of ammunition has been allegedly creating major problems for the military. While ammo shortages have reportedly plagued the Dutch army for years, the situation has become so dire there’s a sense of frustration among army personnel.

“Even if you have no bullets, you have to train with your weapon,” Jean Debie, chairman of the military union VBM, told RTL. “That means, as a soldier, you say ‘Bang, Bang!’ This is obviously disastrous for the morale of the military. You do not want to do this to a professional.”

Soldiers are meant to be refining their shooting techniques and firing positions on a daily basis. But with no practice for months, their skills are no longer relevant, RTL quoted retired Major-General Harm de Jonge as saying.

“You get a hole in the course, and then have only a few months to rebuild confidence in the weapon,” Jonge said, adding that the loss of confidence is “extremely serious.”

The Defense Ministry has acknowledged the problem, according to RTL, saying that while it has “over 400 types of ammunition,” there are “sometimes tight inventories.”

“There is not always sufficient ammunition available for exercises and training. The Defense Ministry understands that troops are not always happy with this. Once additional funding is available, the stockpiles will be replenished in 2015.”

The Dutch government has raised its defense budget to €8 billion for this fiscal year, up from €7.6 billion in 2014. From 2015, the government has also pledged an annual increase in defense spending in real terms of €100 million. According to a report commissioned by the European Leadership Network (ELN), this is a “significant break” from their long-term budgetary policy.

“In fact, it is the first time for over a decade that Europe’s fifth-largest economy will spend more rather than less on defense,” the report said.

According to Defense Ministry figures cited by Newsweek, defense spending now accounts for 1.15 percent of GDP.