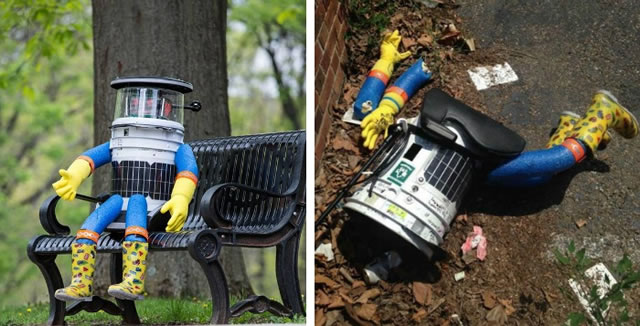 America has a reputation of being one of the most violent nations on earth, and it looks like it has just lived up to its reputation–that is, if you consider the dismemberment of a friendly, hitchhiking robot to be an act of violence.

The creators of “Hitchbot” are a couple of Canadians named Frauke Zeller and David Harris Smith, who programmed the talking robot it so that it would appeal for rides from passing motorists, and then be friendly and communicative once picked up by them.

For Zeller and Smith it was basically a social experiment. And it was going rather well, too! Last year Hitchbot successfully hitchhiked all the way across Canada–and after completing its Canadian odyssey, it then proceeded–once again by thumbing rides from the side of the road–to traverse Germany and The Netherlands as well!

Here is a video that was posted a year ago at the outset of Hitchbot’s Canadian quest:

You’ll notice especially what Smith says starting at about 4:24 in the video:

“Americans are saying, ‘Yeah, they’re doing that up in Canada. Canadians are crazy. It’ll probably work in Canada. It would never work here, because here in the States we would put it into the ditch or shoot it.’”

Smith’s comment, as I say, was made a year ago, and the words have now proven to be remarkably prophetic. About two weeks ago, Hitchbot was brought to the US to begin another hitchhiking journey. The trip started in Boston; the robot made it as far as Philadelphia.

You can go here to read an article posted today in the L.A. Times about the sad demise of Hitchbot, who, as the report puts it, was “found maimed and battered beyond repair over the weekend in Philadelphia.”

The report, which describes Hitchbot as capable of “offering charming jests and reciting random facts,” includes a video from a Philadelphia TV station. The reporter managed to get an interview with Zeller and Smith to solicit their reaction to the robot’s destruction. Tactfully, neither one mentions the comment from a year ago.

“I’m sure it could have happened anywhere,” says Zeller. “We don’t really think it has anything to do with Philadelphia.”

Well, of course, what else would a Canadian say to a reporter from a Philadelphia TV station? The fact is, it didn’t happen just “anywhere,” it happened here in America–this after Hitchbot had successfully made it across three other countries.

It is a sad commentary on life in America. At least that’s how I look at it, anyway.

You can go here to see footage by a video blogger showing scenes from Hitchbot’s last hours in Philadelphia (skip to 7:29 in to jump to the relevant portion of the video), and here to see a closed circuit surveillance video purportedly showing a man kicking the robot, filmed apparently at 5:46 a.m. Saturday.