Home Government Israel has not changed for the worse, it’s always been bad 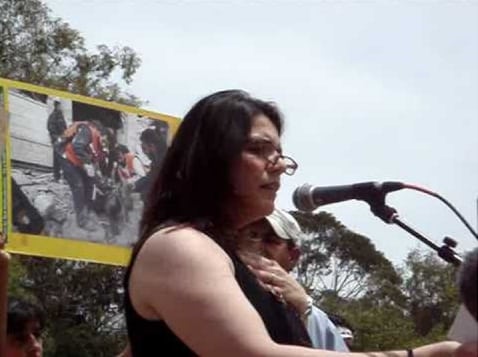 The quote above is from a Mondoweiss article by Avigail Abarbanel with the headline It’s time for American Jews to recognize that they have been duped (by Zionism).

Who is Avigail Abarbanel?

This very courageous Jewish lady who now lives in Scotland is a psychotherapist (which means that she treats psychological disorders). She was born in Tel Aviv in 1964. During her two years of compulsory service with the Israeli army in which she became a Staff Sergeant, it invaded Lebanon. In 1991 she left Israel to make a new life in Australia. (I quote below her explanation of why she abandoned Israel). In 2001 she renounced her Israeli citizenship.

That done she became an activist for Palestinian rights. She supports a one-state solution and a full right of return for Palestinian refugees and their descendants. She says: . “To state it clearly, I no longer believe that Israel has a right to exist as an exclusively Jewish state at the expense of the Palestinian people.”

Her explanation of why she supports BDS (Boycott, Divestment and Sanctions) as a non-violent way to try to pressure Israel to abandon its occupation and to transform itself into a free and democratic state for all of its people is this. “I support BDS because given Israel’s psychology and philosophy of life, I do not see any hope that it will ever change its ways of its own accord.”

Avigail’s Mondoweiss article is an expression of her frustration and at times fury at what she regards as the “disconnect” in so many Western Jewish minds. Her main point is that many American and other Western Jews who are becoming increasingly uncomfortable and even troubled by Israel’s policies and actions are wrong to believe that Israel “has suddenly got worse and become immoral.” She puts it this way.

Still steeped in Israel’s Zionist mythology fueled by generations of Israeli Hasbara (propaganda) efforts, Western Jews truly believe that Israel used to be better but that it has gotten worse, moved to the right. Israel has always been right-wing, if right-wing in this context means committing and then whitewashing Zionist settler-colonialism and its obvious and characteristic evils. Israel has not changed for the worse, it’s always been bad.

The psychological rot in the Israeli psyche runs deep and I felt it from the moment I became aware of myself. In hindsight I know that this is why I left in 1991. I left to save my life and my sanity. Israeli society has always been sick because you can’t build something healthy on a criminal foundation, where so much abuse has been, and still is being inflicted on others. Not everyone in Israel is a psychopath. Ordinary people don’t do so well when they live a lie and cover up evil deeds. Just watch the psychology in families where child abuse is committed and not acknowledged. It’s torturous. American Jews either do not know or refuse to acknowledge that Israel is a settler colonial project. If they knew or if they acknowledge it, would it make a difference to their opinion?

I will not trust American Jews and their supposed left-liberal values until I see intellectual honesty. I want to see true human courage to cope with the feelings that facing the truth about Israel can bring up. As long as they exclude the Palestinians, I won’t believe or trust any good deeds, or any humanitarian sentiments that Jews around the world have for marginalized, oppressed groups. Until they show true moral courage and conviction indiscriminately, I am just not buying it.

I don’t have time or respect for those who are Progressive Except on Palestine (PEP). I am not being paid a commission by Ilan Pappé’s publishers but I will not be able to respect Western Jews until The Ethnic Cleansing of Palestine (Ilan’s book) becomes an essential read for every member of the Jewish community out there and until things are discussed honestly.

Willful blindness means you base your views on fiction or a distorted version of reality, and this leads to a schizophrenic, nonsensical existence. But even more importantly it is nothing less than full collusion with a massive crime against humanity. I hold every Zionist Western Jew who is an apologist for Israel, or who supports it, complicit in Israel’s crimes. The truth is out there for everyone to read about and see in great details. There is no excuse for this kind of dishonesty. It is time American Jews faced the truth and drew the obvious conclusions from it.

I agree 100 percent and then some with Avigail’s statement that there is no reason to believe or even hope that Israel will change its ways of its own accord. Change from within could only happen if a big majority of Israeli Jews were prepared to acknowledge that a terrible wrong was done to the Palestinians by Zionism. And that’s never going to happen. A truth is that most Israeli Jews have been brainwashed by Zionist propaganda to the point where they are beyond reason on the matter of justice for the Palestinians.

But are the prospects for change as a result of outside pressure on Israel really any better?

A few days ago I read something on LobeLog (a web site I respect and admire) that caused me to think the answer is “Perhaps yes” and that it’s not yet time to abandon all hope that Israel could be obliged by outside pressure to end its defiance of international and denial of justice for the Palestinians.

Jim Lobe was quoting from a conversation Chris Nelson had with a former AIPAC official on the subject of why the Zionist lobby is so heavily invested in seeking to secure enough support in Congress to kill the nuclear deal with Iran.

First of all it’s important to know who Chris Nelson is and what his credentials are. Jim Lobe put it this way. “Chris Nelson writes and publishes a private daily newsletter, The Nelson Report, that’s considered must-reading for everyone from Washington think-tankers, lobbyists, administration officials, and congressional staff to foreign embassies and multinational corporations. He closely follows events and developments affecting East Asian geo-politics and economics and is as well-connected to D.C. policy circles as anyone I know. His access, based on his many decades of Washington experience, his fairness, and his discretion in protecting sources is probably without parallel, at least among journalists who cover the region and beyond.

Here now (with my emphasis added) are the five reasons the former AIPAC official gave Nelson to explain why the Zionist lobby is determined to keep on targeting Iran.

That explanation points the way to the truth about Zionism’s greatest real need.

It is to have an enemy which it can present to the Western world as a threat to Israel’s existence.

Zionism’s assertion that Israel has lived and still lives in danger of annihilation, the “driving into the sea” of its Jews, is the reason why Israel’s leaders have not been required by the major powers to end their defiance of international law and denial of justice for the Palestinians.

For several decades Zionism got away with its assertion that the Arabs, regimes and their military forces, were the threat. (As I document in detail through the three volumes of my book Zionism: The Real Enemy of the Jews, this Zionist assertion was complete propaganda nonsense. Israel’s existence was never, ever, in danger from any combination of Arab military force. And that was because the Arab regimes never, ever, had any intention of fighting Israel to liberate Palestine).

But after the 1973 war, in which Israel could have gone to capture the capitals of all of the frontline Arab states, Zionism had a problem because its assertion that the Arabs were a threat to Israel’s existence was no longer credible. Israel desperately needed a new enemy if it was to succeed in preventing its occupation and on-going colonization of the West Bank becoming the subject of serious concern in the corridors of Western power and possibly action.

The revolution in Iran gave Zionism what it wanted and needed – a new enemy which could be presented as a threat to Israel’s existence. Provided Israel’s leaders and their lobby in America could make their false charges about Iran’s nuclear intentions stick, the Ayatollahs were the guarantee that Israel would not be subjected to real pressure to end its occupation of the West Bank and be serious about peace on terms the Palestinians could accept.

In the context above the P5+1 agreement with Iran could (I do say only could) be a game changer. What I mean is this.

When AIPAC fails to secure enough votes in Congress to override an Obama veto, and if Israel does not then resort to a false flag operation to cause the deal to fall apart, the new and developing relationship between the American-led Western nations and Iran will rob Zionism of an enemy it can present as a threat to Israel’s existence.

And that brings me back to the comment made by the former AIPAC official to Nelson. “Without this cause AIPAC and this Israeli government as well as their Republican allies may have to focus on a more critical issue, like peace with the Palestinians.”

I assume that what the AIPAC official meant without saying so is that if and when Israel does not have an enemy it can present as a threat to its existence, the governments of the major Western powers might find the will to use leverage as necessary to try to cause the Zionist (not Jewish) state to be serious about peace on terms the Palestinians could accept.

During the long countdown to the P5+1 agreement with Iran I thought the odds in favour of there being a deal were 60-40. Despite the optimism I have expressed above, I fear the odds in favour of Netanyahu and the completely mad men to the right of him resorting to a false flag operation to kill the deal are the same. (By false flag operation I mean an Israeli attack on an American interest or interests somewhere which with manufactured/false evidence would be blamed on Iran).